A General Who Ended Fading Democracy 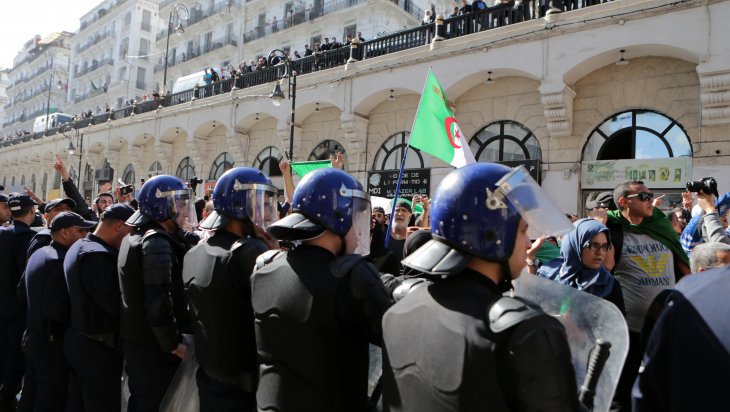 Following the passing of General Ahmed Gaïd Salah military Chief of Staff and Defense Vice-Minister Algeria’s strongman of the year 2019, a year that should be remembered with a marble white stone, Algerian people and the military have reached a level of understanding and eventually trust in a very rare way to witness in Arab countries -- this because of the success of the political crisis management on one hand, and the masses management on the other by the military.

Thus how would General Gaïd Salah’s legacy compare to his peers like Khaled Nezzar and Mohammed Mediène alias Toufik?

General Ahmed Gaïd Salah’s story would be undoubtedly the more catchy story, neither Generals Nezzar nor Toufik, whose stories shouldn’t even be in this conversation, both are considered as Algeria’s Jan ’92 Generals quarterone, now the former is Spain seeking refuge running from Algerian justice that was sentenced for 20 years in absentia last Fall, and the latter who was sentenced 15 years in the military prison in Blida.

General Gaïd Salah played a big a role for the country new political dynamic of change and stability. Unlike the two generals in 1992 who both were the January ’92 coup orchestrators against President Chadli Bendjeddid, a coup that is still in the majority of political analysts' mind, and was a political language element argument following the ex-President Bouteflika resignation in April 2nd, 2019 General Gaïd Salah would clone the Egyptian July 3 td, 2013 coup scenario.

But no single bullet was fired, not a single blood’s drop was shed, and this it will be for the general’s credit and virtually legacy. He contributed as much to the ultimate outcome of the peaceful uprising (Hirak), after eliminating his Algeria’s twenty-five years as Lord of Algeria (Rab Tez’ayer) and his fearful Intelligence institution, is General Toufik.

Managing the course of the Hirak with such a professionalism and a determination this would have run badly the same like in 1992, but it did not. Even it was run in the greatest achievement that Algerians would remember for longtime, General Ahmed Gaïd Salah plan's preemptive action against a failed coup of March 30th, 2019 led by General Toufik and the ex-president’s brother a-Saïd who was Algeria’s de facto president.

The Club des pins Battle final hours that took place in March 29th, ended the Algerian regime’s dominant wings’ trench war between the military, Zeralda-sur-Mezafran clique and the DRS State. This likely ended bloodless, the general saved the country and the people from the unknown or Algeria would have had got in the rhetoric of Donald Rumsfield quote describing the unknown in the eve of the U.S. invasion of Iraq in March 2003:  “... because as we know, there are known knowns; there are things we know we know. We also know there are known unknowns that is to say we know there are some things we do not know. But there are also unknown unknowns - the ones we don't know we don't know.”

On this note, as General Toufik and a-Saïd were already leaning in that direction and making inquiries about how that could be done to overthrow General Ahmed Gaïd Salah. If not Gaïd Salah and his Intelligence services were aware of General Toufik and a-Saïd's coup, they would have crossed in Ali Khoja (military HQ) gate and committed the unknown in military terms: an operational plan.

General Gaïd Salah was not Algeria’s Queteron Generals, the ones who almost disintegrated Algeria’s social cohesion and cultural integration came close to fail the country’s post-independence State’s civil institutions. A consequence that led to the Bouteflika system and its oligarchs to thrive for two decades. Their fall was felt like a liberation of the Algerian people from what has become known in Algeria’s political new lexicon: Gang (al-E’esaba).

General Ahmed Gaïd Salah was the driving engine in all, not only planning, but overseeing the Hirak and its ramifications, while securing the borders on the country’s eastern and southern sides in light of the ongoing Libyan civil war and the turmoil in the Sahel. For most of the Mosaic Hirak political trajectory, the main perspective was to keep it peaceful and not to clash with the protesters, trying to execute a military tactic to keep order in the streets and protect people’s properties. Despite all the movements of the radical wings in the Hirak who wanted to provoke the military with their obstructionist slogans towards the presidential election and the political process that the military aimed to end fading democracy established by the ex-president system.

While the protesters in Hirak Act III tied their hands with unreasonable demands that prevented them from having their message and demands heard the way they wanted to be heard by Algerians. But once the presidential election ended and French media got to dig into Algerian domestic politics as usual, questioning the legitimacy of the new president -- following the death of General Gaïd Salah, it becomes clear that the generals and the new president were better prepared with the time being again, from the Hirak onwards. Because the protesters in the Hirak were looking for Hirak season II, but the sudden death of General Ahmed Gaïd Salah changed the entire Hirak’s dynamic giving a momentum to the new president to lead, and act quickly like the Commander-in-Chief and Defense Minister; after getting a constitutional legitimacy trough his election, he got a popular one as well, wrapped up with General Ahmed Gaïd Salah legacy who has reconciled Algerians with the military, enhancing the new president’s presidential image and action, a president who was caught and he was almost overshadowed by the generals to execute his program.

Another unique and vital asset that General Gaïd Salah brought to the table is that he was able to contradict the quarteron de généraux making an end also to the military habit to make a president since 1962. General Ahmed Gaïd Salah broke Algeria’s political taboo and demystify the military, in 1999, ex-President Abdelaziz Bouteflika wanted to end the DRS State which ruled over Algerian daily life and politics since September, 1990, when Colonel Toufik was appointed as Head of the fearful Intelligence Service (DRS), following the arrival of General Khaled Nezzar as Defense Minister.

Mohammed Mediène (known as Toufik) named a Lieutenant-Colonel as his assistant who had been dismissed by General Mohammed Betchine, it was General Larbi Belkheïr who rehabilitated him, imposing him on Toufik. As a result, “The Generals’ Quarteron” was formed (because Toufik and Smaïn were quickly promoted and received their generals’ stars), which would urge on all the Military putsch of January 11th, 1992.

That event would perhaps not have succeeded without the preliminary blessing of former French President François Mitterrand who did not want to see the Islamists of ex-FIS Party in power.

February 22nd, April 2nd and December 12th, showed in fact a rejection of politicians deplored for their cynicism and their corruption, and not a rupture with politics. It’s about a return of the people as main actors in the story and a rehabilitation of politics, highlighting the virtues of good citizenship. “The Gang” is made up of the adversaries of the political alternative who had prevailed in the Jan 11th, 1992 putsch, then in a form of fraud in elections starting in 1997, when late Dr. Abdelhamid Mehri (former FLN Chairman) made his famous statement: “the military decided not to lose elections ever again…” Since the Military Chief of Staff, Vice-Defense Minister General Gaïd Salah decided to break with these undemocratic practices, and to follow up on the people’s demands, setting out of the premises of new stable Algeria, a plural and diverse like its Mosaic Hirak’s story-line that ended with an Algerian longtime untold story.