A New Algeria: Between A Bittersweet New Constitution and Politics of Doubt 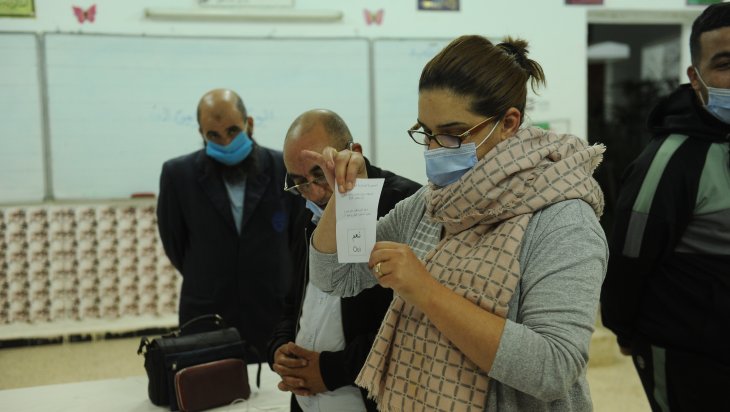 Algerians went to the polls for a second time in less than a year in the aftermath of the fall of Ex-President Abdelaziz Bouteflika to back constitutional reforms set by President Abdelmadjid Tebboune last winter. A low turnout among the voters was registered and, according to the electoral board, 66.8 percent of voters backed changes as less than one in four registered voters cast a ballot.

A draft to change Algeria’s constitution won the most votes in last Sunday’s referendum, the election commission declared, but the very low turnout of 23.7% would undercut the president and his administration’s strategy that would have used the referendum as a frame for legitimacy to turn the page on dissatisfaction with last year’s dissatisfaction with the presidential election.

The result of the referendum has created a new political challenge for the president and the army instead of hopeful change in the political landscape of a new Algeria. It has begotten a politics of doubt. With a 23.7% turnout, 76.3% did not go to the polls, and this is a political message sent to the de facto power in Algeria.

President Abdelmadjid Tebboune’s Social Platform Acts
Yet, the talk of the town these days in Algiers West Hills is about President Abdelmadjid Tebboune who was already off the radar a few days earlier with the debate on the new constitution. The first rumors were circulating about the absence of the president who has made the constitutional referendum a springboard for his political mandate. This he considers to be a platform for social acts, acts of a second independence for a new Algeria. Later the president was obliged to self-isolate in a self-lockdown as a precautionary measure for a period of five days at the presidential residence.  The communication office of the Algerian presidency justified the president’s “quarantaine” and high- ranking officials of the presidency were testing positive with COVID-19.

The national media did not wait long to demystify the deterioration of the president’s health, suffering from COPD (chronic obstruction pulmonary disease), not an insignificant risk factor. On October 24 he was admitted to Ain Naâdja military hospital in Algiers, in critical condition. His hospitalization was confirmed three days later by a communiqué to the media and, later, President Abdelmadjid Tebboune flew to Germany for medical reasons. The septuagenarian president is reportedly a heavy smoker. The communiqué acknowledged the seriousness of the situation by announcing that the president "has been transferred to Germany" for intensive care; the story has reminded Algerians of his predecessor’s (Ex-President Abdelaziz Bouteflika) images from the French and Swiss intensive care medical units.

President Abdelmadjid Tebboune was expected to inaugurate the prayer hall of the new Grand Mosque in Algiers. The third largest in the world, the mosque was is an extravagant project of Ex-President Abdelaziz Bouteflika in 2012. President Abdelmadjid Tebboune’s illness comes as Algeria is grappling with a slight rise of coronavirus cases, with health officials on Wednesday reporting 642 new infections and 10 deaths. Since Algeria’s first case in February, the country of 44 million has registered 60,169 cases and 2011 deaths from the virus.

Uncertainty On the Horizon
The ongoing political situation does look gloomy, in this sense, it opens to all possible scenarios. Thus, before, on April 2, 2019 the late General Gaid Salah proceeded to send Ex-President Abdelaziz Bouteflika off to a peaceful retirement because of his poor health status.

Today, Algerians are worried about such a scenario. Meanwhile, the military, as before on April 2, 2019 are following closely the president’s health developments and are occupying the media as in 2019. Military Chief of Staff Major General Said Chengriha made a public appearance and an aggressive campaign in favor of the drafted constitutional referendum. A week before the election, he intervened four days in a row when President Tebboune was hit by COVID-19.

The communiqué of the 28th of October acknowledged the seriousness of the situation by announcing that the president has been transferred to Germany for intensive care. Following the current health concerns of President Abdelmadjid Tebboune, all the major general’s movements led the analysts to speculate that the army had already taken the lead for a more prominent visibility, and had a “plan B” to face any unexpected major political force that would strike the country.

The army, however, does not wish to ostensibly show itself to the public too much. It is the effective power in Algeria. Yet, the mechanism of the Algerian state nowadays is forcing the army to play a leading role in the matter of the stability of the institutions and law-and-order imperatives that the country is facing domestically and regionally. The current constitution provides for no alternative but to resort to an interim phase once the physical and intellectual incapacity are confirmed.

Article 102 of the current constitution and Article 94 of the newly drafted constitution is the article that the late General Gaid Salah (the vice-defense minister and military chief of staff), applied to remove Ex-President Abdelaziz Bouteflika in April 02, 2019. It is up to the president whether he has full physical and intellectual capacity to lead or not. If he leaves his post, it would be the current interim president of the Algerian senate who would fill the constitutional gap to ensure the continuity of functioning of the state’s institutions. The senate president, Salah Goujil, himself is in poor health. It is a nightmare for the military to face such a scenario, where more than 75% of the country’s population is under 35-years old. An Algerian political establishment that found itself in the aftermath of the peaceful mosaic Hirak wonders about a paradoxical demographic and the democratic dynamic.

Algerians are still traumatized about the image of an ill president in a wheelchair running for a fifth term. Algerians at large are saying, “we need a young civilian leader.” A fair development that the military might look for would be another leader in the coming months if the president’s health does not get any better.

The Consequences of the Hirak
Nonetheless, all the predictions lead to a belief that the army understands more than before, despite the timid vote of Algerians on the new country’s constitution. This will give another layer of legitimacy to the current administration in a time when the country is facing a serious health pandemic crisis, and severe economic challenges. Meanwhile the radicals in the Hirak are pushing hard to relaunch the trajectory of a new season Hirak to further pressure the military to an end game strategy. It is unlikely for the Hirak season to find a resonance  among Algerians who are concerned about the COVID-19 epidemic’s socioeconomic impacts on their pockets and their children’s future. Undoubtedly, the army monitors the president's health status through its services. The team of the chief of staff, General-Major Said Chengriha, is following any developments in Germany, shutting down any possibility of a new institutional crisis. The military knows what is at stake. They realize that the situation is not rosy.

It could be dire and could plunge the country into an even more complex crisis. Algerians are still not trusting the politicians and even the current government because of its slow socio-economic answers. They still have respect towards the military, but how long it will it last? There are legislative elections ahead at the end of this year and they will be followed by local elections early next spring. On the other hand, the military is not looking for the authoritarian option. They are letting the politicians find a solution through a new generation of activists who might excel, and are letting a new young civilian leader emerge.
In sum, in a country where the army has always played a decisive role in picking presidents, it is important to mention, this time, that the army is not wanting a cosmetic change. They are avoiding chaos, and the eventual application of Article 102 of the current constitution, i.e. Article 94 of the new voted constitution. The army keeps to its roadmap, laying the foundations of a new approved constitution for a new Algeria that let President Abdelmadjid Tebboune and his administration  lead and achieve the peaceful Hirak’s demands: stability, prosperity and accountability.