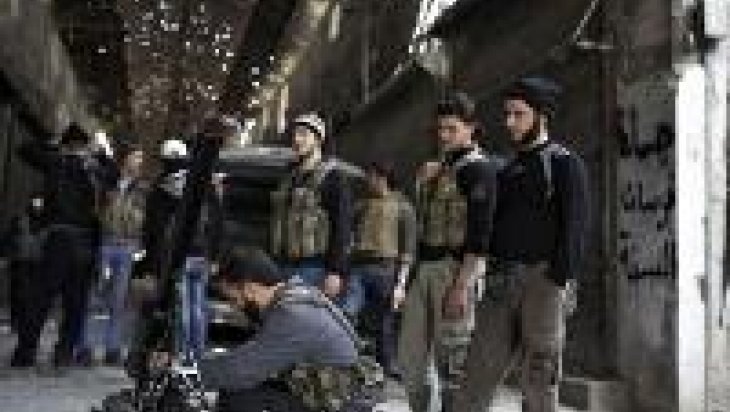 The popular uprising in Syria first turned to an armed resistance toward the end of July 2011 when a group of soldiers broke away from the Syrian Army and declared they formed an armed opposition called the Free Syrian Army (FSA). In the first phase of the armed opposition, the FSA was a common name used by diverse irregular armed groups. Even if every group acknowledged itself as a part of the FSA, in fact there was no hierarchical and coordinative order between them. The FSA was made up of small, armed groups that controlled different provinces and districts in all cities.

During the civil war, the Syrian Army partially managed to maintain its integrity and suppressed the revolt by resorting to all types of violence. However, the international community could not give a deterring response against the violence aside from imposing political and economic sanctions. After a while, it started to become clear that the Syrian regime could not be shifted without a military intervention from outside the country. Such an operation would only be possible under the leadership of the U.S. The U.S. did not lean toward military intervention because of various anxieties and thus everyone focused on a regime shift through the Syrian opposition. However, at this very point two primary concerns arose. The first was the irregular structure of the armed opposition and the second one was the groups, which gradually got stronger among the opposition, that were made up of extremists. Furthermore, the al-Nusra Front, the Syrian branch of al-Qaeda, was the leading of the groups that carried out the most efficient struggle against the regime.

As a result of the radicalization and atomization of some armed opposition groups, as well as the attempts of a political transformation through the opposition, the organization of the armed opposition came into question. At this stage, on Dec. 11, 2012, the Supreme Military Council was established with the participation of many leaders of the armed opposition in Antalya. As a result of the voting, Salim Idris was appointed as chief of- staff of the FSA. The main purpose of constructing the Supreme Military Council was to organize the irregular armed groups into a hierarchical military structure. At this point, some radical groups like the al-Nusra Front and the Ahrar al-Sham were excluded from the council, which resulted in discrimination among the opposition. In order to establish a regular army, the council needed to arm the opposition and support it financially. This plan did not work out and every country continued to support the armed oppositions they felt closest to. The declaration of the Supreme Military Council's failure came after the separation of the strongest groups that later established the Islamic Front. In December 2013, the Islamic Front took hold of the Bab al-Hawa border crossing, which is located on the Turkey-Syria border and was used as the main encampment by the FSA. As a result of this operation, Idris had to leave Syria and went to Qatar.

After the attempts of the Supreme Military Council failed, the reconstruction of the FSA came into question in February 2014. With regard to this, first on Feb. 16, 2014, Idris was dismissed and replaced by south Syrian AbduIlah al-Bashir al-Noeimi. Idris evaluated this decision as a coup and rejected it. Some armed opposition groups also rejected this decision, which was supported by Asad Mustafa, defense minister of the in-exile Syrian government and the Supreme Military Council. However in March, al-Noeimi took over the task with the support of the Syrian National Council. Consequently, a new military senior management of 16 members was established under the leadership of Mustafa and al-Noeimi.

It is possible to say that there two underlying reasons for the attempts at reconstructing the FSA. The first is the exclusion of some radical groups from the military opposition with the approval of the U.S. The second is a reflection of the regional-based tension between Saudi Arabia and Qatar concerning Syria.

U.S. President Barack Obama paid a visit to Saudi Arabia at the end of March. Following the talks in which Iran and Syria were addressed, it was explained that bilateral relations are stronger when compared to past periods in which there were tactical differences about Syria. In line with this explanation, it was thought that despite the restraint of Saudi Arabia, the U.S. would give up its objection to arming the Syrian opposition by stipulating terms. U.S. officials said the subjects of how to reinforce the Syrian opposition and how to isolate the extremist groups were also discussed in detail. These explanations mean that as a result of Saudi pressure, the U.S. agreed to give greater military support to the opposition. However, it was decided that the support would be given to groups the U.S. thought to be acceptable. The change in the FSA was in parallel with the demands of Saudi Arabia. That is why it is possible to consider this change as a product of the reconciliation between the U.S. and Saudi Arabia.

The second factor that was effective in the reconstruction process of the FSA was the recent conflict between Saudi Arabia and Qatar. The cold war, which has been lasting between these two countries since the start of the Arab Spring, became more evident in the beginning of March. Saudi Arabia, the United Arab Emirates and Bahrain withdrew their ambassadors from Qatar on the grounds that it supported the Muslim Brotherhood, cooperated with the Islamists and violated the terms of the Gulf Cooperation Council (GCC). The underlying reason for the problem is the two countries support different groups in Egypt and Syria. Although both countries take sides with anti-Assad groups, they essentially support different opposition groups. Furthermore, they are trying to bring those to whom they are are closer to power by controlling the Syrian National Council. Saudi Arabia's government recently announced that it blacklisted eight opposition groups as terrorist organizations, among these are an al-Qaeda-linked organization called the Islamic State of Iraq and the Levant (ISIL), the al-Nusra Front and the Muslim Brotherhood. Qatar supports the Muslim Brotherhood both in Egypt and Syria. The latest decision about the FSA openly shows the antagonism between Saudi Arabia and Qatar. Ahmad Jarba, the president of the National Coalition for Syrian Revolutionary and Opposition Forces, and Mustafa Tlass, former minister of defence for Syria, are the driving forces behind the decision and they are closer to Saudi Arabia. Similarly, a large majority of the military leaders in the decision-making body of the new structure are supported by Saudi Arabia. However, the groups reject the change and regard Idris as their president are closer to Qatar.

The change in the FSA is a new phase in the strategy of transformation into a regular army and excluding radical groups. Although some attempts were made on this subject since the beginning of the armed struggle, they all failed. The only condition for the success of the new steps is to unify the support that comes through diverse channels. Many countries made a lot of investment in the oppositions through their own means. The success of the new strategy may have a lesser possibility without the persuasion of these countries.