After the First Session of the Geneva II Conference 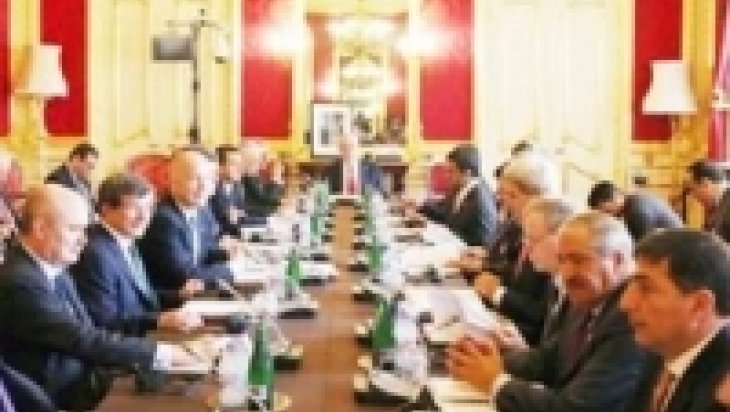 The U.S. and Russia, which are the two major world powers that support the opposition camps as a result of the deadlocked civil war in Syria, reached an agreement that only a political solution would put an end to the civil war in Syria. As a result of this agreement, the Geneva conference pioneered by the U.S. and Russia was held with participation of the permanent members of the UN Security Council, European Union, United Nations, Arab League and some other countries in the region including Turkey in June 2013. The Geneva Communiqué, determining a road map for a political transition in Syria, was issued at the end of the conference on 30 June 2013. The communiqué states that the key steps in the transition should include: Establishment of a transitional governing body with full executive powers that could include members of the government and opposition; monitoring of the elections by the transitional government; and its paving the way for transition to democracy in the country. In addition to this, the communiqué also included the points such as participation of all groups and segments of society in Syria in a meaningful national dialogue process; review of the legal system; free and fair multi-party elections for the new institutions and offices that have been established.

Following the Geneva conference, there were some efforts to convene the parties in order to implement the points agreed during the meeting. However, the second conference did not take place due to disagreements over who would represent the opposition, and what would be President Bashar Assad's role in Syria's future. The efforts yielded result in November 2013, and UN Secretary-General Ban Ki-moon announced that he would convene the Geneva conference on Syria in Geneva on 22 January 2014 aiming to contribute to a peaceful transition in Syria.

The Syrian government announced on 27 November 2013 that it would participate in the Geneva II conference, but added that its official delegation would not be going “to hand over power to anyone”. The primary reason underlying failure of an agreement between the regime and opposition was the disputes on whether President Bashar Assad would have any role to play in Syria in future. “I see no reason why I shouldn’t stand for the elections if there is public desire and a public opinion in favour of my candidacy. In short, we can say that the chances for my candidacy are significant,” Assad said in an interview three days before the conference. Thus, he gave a message that his role in Syria's future is not open to discussion. In the same interview, he said they would by no means share power with opposition, and the Geneva conference should produce clear results with regard to the “fight against terrorism” in Syria.

These developments and statements before the conference lowered the expectations that the Geneva II would be a critical stage to put an end to the civil war in Syria. Nevertheless, agreeing that only a political solution would put an end to it resulted in supporting the Geneva process as the only way to solve problems. The predominant view was that the only achievement that the conference could offer would be to create safe corridors in Syria to allow the safe transit of humanitarian aid in the country. Beyond that, it was not possible to take any step towards a ceasefire or a political transition for various reasons. Which could be listed as follow:

- The biggest weakness of the Geneva II conference is that the talks are held between the regime that is capable of taking a step but is not sincere on the subject, and the opposition that really wants to achieve somethings but is not powerful enough to do so.

- Recently, the power balance between the regime and opposition has gone in the regime's favor in the field. In this environment, neither the regime would be eager to make concessions nor would the opposition in a weak position want to negotiate the political transition.

- The strong position of the regime renders the red line of the opposition which is “Assad's departure from power” meaningless. This situation creates an “uncompromising opposition” between the parties.

- Agreement and peace could be achieved only between powerful parties. However,  representatives of the opposition in the Geneva II conference do not represent the entire opposition in the field. Islamic – Salafi coalitions which are the rising power of armed opposition are not represented in the Geneva. Also, there is a trouble in representing Kurds who have become one of the most important fronts of the civil war. While certain Kurdish parties participated in the Geneva II conference under the umbrella of Coalition, PYD did not. Currently, PYD is the only Kurdish movement with military power and the strongest one in terms of the social support. Hence, it could be suggested that the Geneva II conference, in which PYD did not participate, lacked Kurdish representation. As Geneva II conference continued, Syrian Kurdish groups under the leadership of Kurdish Democratic Union Party (PYD) declared autonomous administrations in Kurdish-populated areas. Thus, while talks are held on formation of a new Syria, unilateral autonomy declarations take place in Syria independently of the talks.

- Representation problem raises question marks in minds about how an agreement could be implemented in the field, even if it was reached.

- Another major achievement that could be reached as a result of the Geneva II conference might be to recognize the Al Qaeda-affiliated Islamic State of Iraq and al-Sham (ISIS) as common threat and primarily take a decision to eliminate this threat.

The most significant goal expected to be reached in the Geneva II conference was to form a transitional government including members of the government and opposition, but it failed. Any concrete step could not be taken even on humanitarian subjects during the first session of the conference. It could not be agreed to open aid corridors for Syrian civilians. Following the first session, Special Representative of the UN and the Arab League, Lahdar Brahimi announced that the regime agreed to let women and children leave besieged rebel-held areas of Homs. Syrian Information Minister Umran al Zubi asserted that this development which is offered as the only positive step regarding the Geneva II conference was actually an agreement reached between the regime and International Committee of the Red Cross. Even this statement shows how strict the regime is in terms of making concessions to the opposition.

A concrete step could not be taken due to the uncompromising opposition between the parties and weak representation of the opposition. However from an optimist point of view; both parties' sitting around the same table, their not leaving the talks, and agreeing on convening again in the second week of February are all positive developments. Which comes to mean that the dialogue will continue, and this situation gives hope that concrete decisions could be taken in the upcoming period. On the other hand, the issues such as formation of transitional government; power transfer; ceasefire are still not open to negotiation in the short and medium terms. But the fact that negotiations will continue might pave the way for delivering aid to civilians, prisoner exchange; and return of some refugees. Another positive aspect is that both regime and political opposition recognize each other as legitimate representatives. From that point of view, it is possible to suggest that both parties stepped back.

It is not possible for the Geneva II conference to generate a solution on its own about the issues such as ceasefire, power transfer, and transitional government. It might be said that the conference paves the way for taking decisions on the aforesaid issues in future. Such critical issues could be tackled when a more balanced environment is provided between the regime and opposition in the field. At this point, both parties put forward maximalist demands, which renders reconciliation impossible. Reaching a balance in the field would draw the parties into a more realist line. The Syrian civil war has turned into a war by proxy, in which regional and global powers are involved. Hence, another condition for the Geneva process to achieve success on critical issues is for all external actors to reach an agreement, and also for countries which strive to find a solution to the civil war through military methods and support the opposition camps to reach an agreement among themselves.