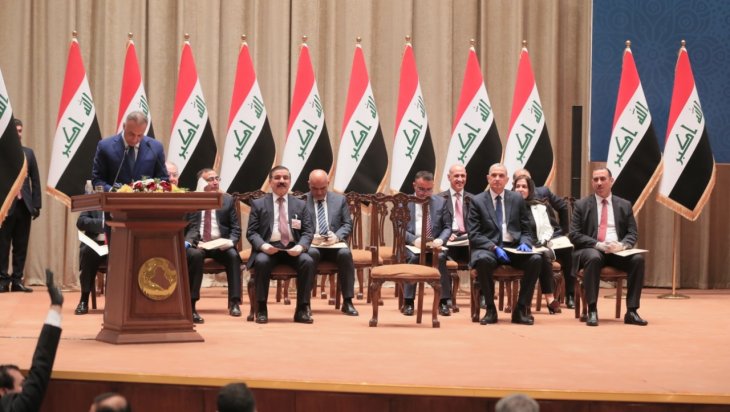 The government that was established by the long endeavors of Adil Abdulmahdi after the holding of general elections in Iraq in May 2018 came to an abrupt end with Adil Abdulmahdi's resignation on 30 November 2019 upon the ongoing demonstrations that began on 1 October 2019, thereafter paving the way for the formation of the new government process. In that regard, the Iraq’s President Barham Salih initially tasked the former Minister of Communication, Mohammed Tawfiq Allawi, with the formation of the new government on 6 February 2020. Having composed cabinet list, Tawfiq Allawi's new cabinet proposal failed to obtain enough support from political blocs before the parliamentary approval, thus, Allawi withdrew from forming a new government without a parliamentary session on his cabinet list.

While this situation brought about a new political crisis in Iraq, Barham Salih, taking the initiative over the demands of political blocs, designated the former governor of Najaf Adnan Zurfi as the Prime Minister-designate. Upon Zurfi's rapid formation of the cabinet list in the absence of consultation with the political groups, Shia political groups that previously pursued diverse interests came together and forged their efforts in determining a joint candidate. After the negotiation process, the Iraqi National Intelligence Service Director Mustafa al-Kadhimi was designated as the joint candidate. The fact that other groups advocated Kadhimi's candidacy put pressure on Barham Salih and Zurfi, as a result of which the latter resigned from his post while the former nominated Kadhimi to form the new government.

Even though the presence of representatives from all groups in the Iraqi Parliament during Kadhimi's nomination for the office appeared as reaching of national compromise on Kadhimi, it would not be mistaken for one to argue that such national compromise lasted only until the process of the selection of ministers. 3 days prior to the end of his 30-day constitutional deadline for the formation of a new government, Kadhimi proposed 20 names for a total of 22 ministerial positions, without determining ministers for the Ministry of Oil and the Ministry of Foreign Affairs. Iraqi Parliament held a session on May 6, 2020, during which the coalitions that initially advocated Kadhimi's candidacy, namely the State of Law Coalition led by Nouri al-Maliki and al-Wataniya Coalition led by Ayad Allawi, were absent along with some Kurdish  and Basra MPs. 226 MPs, out of a total of 329, attended the session in the parliament. The turnout in the parliament significantly exceeded the threshold that is needed to reach the quorum (half of the number of MPs plus one), hence facilitating Kadhimi's formation of the government. However, given that every minister is separately voted in the Iraqi political system, some candidates failed to get approval from the parliament as a result of the conflict of interest among some groups. While 15 ministerial candidates that Kadhimi proposed survived the vote of confidence, 5 were rejected by the lawmakers. Yet this does not represent a new political situation for Iraq, since the previous four governments were also formed with incomplete cabinets, with the vacant ministries to be fulfilled later on. Of the 11 Shia and 6 Sunni ministerial candidates, 9 Shias and 5 Sunnis managed to receive parliamentary support. On the other hand; of the proposed 2 Kurdish candidates, only the Reconstruction, Housing and Municipality Minister managed to obtain the parliamentary support while Mustafa Abdulrahman, the former governor of Kirkuk, was rejected as justice minister. Furthermore, while the Turkmens were not given a seat in the new cabinet, Christian candidate Sana Cercis for the Ministry of Displacement and Migration was also rejected by the lawmakers. Of the 20 names that were submitted for the parliamentary approval, the rejected 5 candidates included the ministers of Justice, Culture and Tourism (Faily Kurdish), Commerce (Sunni), Agriculture (Shia) and Displacement and Migration.

Kadhimi's taking of office by forming the new government appears to have relieved the tension upon the fragile political establishment in Iraq. It is especially noteworthy that Kadhimi initially visited Ammar al-Hakim, leader of the National Wisdom Movement, whose political discourse emphasizes "Iraqiness", and the former Prime Minister Haidar al-Abadi shortly after assuming the office. In that respect, it is reasonable to argue that Kadhimi would refrain from being dragged into U.S.-Iran rivalry. While Kadhimi's government is expected to carry Iraq into early elections, there also remains urgent steps to be taken. The budget for 2020 is yet to be passed in the parliament. ISIS's inflammation of its activities over the Kirkuk-Diyala line also exposes the Kadhimi cabinet with security problems. Moreover, it is also of importance that coherence between al-Hashed al-Shaabi (Popular Mobilization Units - PMU) and other security forces is reached. At this point, it appears that one of the most problematic issues awaiting Kadhimi is the division within PMU. The conflicts among the groups that compose PMU affect both domestic politics and the regional issues, resulting in a variety of problems on domestic, regional and international levels. Particularly, the escalation of rivalry between the U.S and Iran over the Iraqi soil since summer 2019 seems like one of the most challenging topics for Kadhimi administration. Both the US and Iran position itself as an ally of Kadhimi, while the latter became the first country to congratulate Kadhimi, the former announced its satisfaction with the new government and extended the waivers from sanctions for Iraq for 4 months over the purchases of gas and electricity from Iran. One should also realize the message of the "US-backed Kadhimi formed the government" headline published by The New York Times, one of the leading American newspapers. It is also announced that the US and Iraq will enter into strategic dialogue talks in June 2020 for settling on a lasting cooperation deal. Iranian groups might probably exploit the presence of US troops in Iraq as leverage against the Kadhimi government. The tensions, which sometimes turn into open conflict, between pro-Iran groups in Iraq and the US constitute another problem for Kadhimi. At this point, it is logical to claim that Kadhimi should retain a balanced position between the US and Iran. However, the financial burden on the Iraqi economy and possible US incentives for Iraq might draw Kadhimi closer to the US. It is worth paying attention to the news reports about a potential loan deal between IMF and Iraq with the blessings of the US To ease the tension in the domestic sphere and gain the public support, Kadhimi might turn its focus on economic policies, which could result in a more cooperative situation between Iraq and the US. The domestic situation should be highlighted, since the protests, which began on 1 October 2019, were triggered by the economic hardships and lack of services. Though Kadhimi's roadmap foremost aims at carrying Iraq toward the early elections, some expect that elections might be held in 2022 on its usual date due to the economic constraints. Hence, Kadhimi may take further steps in developing policies for the long-term issues, and if successful, it should not be underestimated that he might stand a change in furthering the office in the next term. At that point, Kadhimi would also need a balanced approached in Iraqi foreign policy. This might create opportunities for Turkey as the Turkish Foreign Ministry declared that it "stands ready to work with the new government in a spirit of cooperation in all possible fields, first and foremost on security, trade, investment and re-construction on the basis of mutual interests, as has been the case with the previous Iraqi governments". The support of the regional countries could also be crucial for Kadhimi's success at home. Kadhimi's possible success, given the sense of euphoria that it created in Iraq and elsewhere for the time being, might actually be a turning point in leading Iraq for a stable future.