Algeria: Change Only the Regime Wants 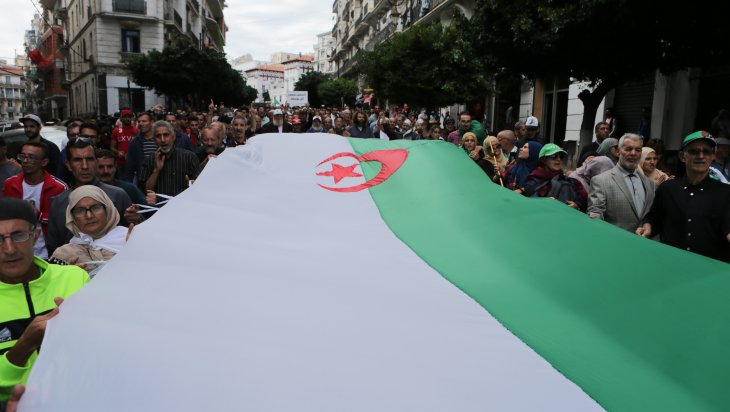 As usual Algerians did not fit in with the rest of the Arab countries’ customs. This time it's not because of their lingua franca dialect, but of a crucial presidential election outcome that will be taking place on Thursday, December 12th. The FLN party won’t present a candidate for the election, which is a first for that party, Algeria’s political Godfather. This stance has left analysts wondering about the party’s decision, despite its support for the election to be held on time and the potential for a break-through in the political impasse that the country’s been in since the postponement of the July 4th presidential election.

Thus the dynamic of the protest movement has changed since February 22nd, which is a milestone in Algeria’s politics. No one could argue that the military, without the use of the Hirak during their trench warfare against the ex-DRS State elements and a-Saïd gangs, would excel to defeat the ex-president Bouteflika’s system.

The radical groups in the Hirak want to see the entire regime brought to an end. An equation that could lead to a real change in Algeria, as millions of Algerians showed their opposition to another presidential election farce and the reelection of ex-president Bouteflika in the Hirak Act I (Feb 22 - July 4), chanting on Friday’s and Tuesday’s marches Yat nahaou Ga3 (they shall go all); then during Hirak Act II (July 4-September 15) hundreds of thousands showed their rejection asking for the military Chief of Staff and Defense Vice-Minister General Gaïd Salah, the country’s strongman and the de facto ruler, to leave; and now Hirak Act III (September 15 -) has entered the lap of obstruction and has radicalized further and polarized the Hirak and Algerians.

Going from opposition to rejection to obstruction, consequently leaving no choice for the military but to persuade the silent majority to go to the polls.

A unique election for Algerians who for the first time don’t know months if not years ahead the name of the next president -- likely Algerians will elect the first president who is not a liberation war veteran, or simply a military man in a Francesco Smalto suit. This is the first time in Algerian republic history that elections are not controlled by the administration. A National Election Independent Authority (ANIE) will be following the entire process to the official announcement of the winner. Meanwhile Algerians just followed a national debate on national TV between the five contenders for al-Mouradia Palace.

Nonetheless, Algerians are cynical about politics and their politicians -- the majority still believes that the next president will be the military’s man.

However, there is the specter ratio regarding the participation after the call for boycott from the rejectionists and the obstructionists who instead are calling for a political transition rather than presidential election -- even though this period looks already like a political transition. There was a national dialogue last summer, and political parties, including the Swiss cheese ones, managed to join the legal process, a new electoral law was adopted and a National Election Authority was created.

Oddly the Islamists, ex-FIS hard-liners (Ali Belhadj followers) the “neither-nor” of Sheïkh Abdallah Djaballah, leader of the Algerian Islamist party FJD, are boycotting the election. Hence the big loser in this election is the MSP party whose strategy brought the Algerian Islamists to their knees before the regime’s long term strategy: demonization and banalization of evil theory. As for the radical secularists, why don’t they trust the polls? To their credit, the answer is, nobody does in Algeria.

The point is not about the result per-se as it is about the role of the new president in this election.

But for the radical secularists are traumatized also by the polls’ result nationally, they represent the elitist and urban yuppy Algerian society, whose way of thinking and behaving is disconnected from the average Algerian who is struggling to survive on a daily basis. Their parties are ethnic and regionalist parties, their candidates could not reach the 10% of national vote at best.

But Thursday's December 12th presidential election will certainly boost the morale of the military, the silent majority and to some extent the FLN party's opportunist adherents. Therefore, Algerians today are watching a classic ancient Greek political drama.

In spite of the opposition of tens of thousands lost in distortion, who can seriously challenge the Algerian regime? This is why the “ghost” of the ex-FIS party is still hanging on, not only over the people's heads, but also in the regime's mind. Twenty-eight years ago Algerians voted massively in a front-to-front fight for the ex-FIS party. This was not for socio-political adhesion but to sanction severely and send the FLN party to the National Museum, which protesters in the Hirak are calling for today because of its high corruption and unjustifiable incompetence.

It's true, the consequence of January, 1992 led to the tragic Red decade. The secularist and the ethnic political parties had survived the sinking, used by the military who served as its lifeguard until it reached the shore. Today [they] are vehemently criticizing the military, and calling for a civilian State. Did these parties’ leaders and the corporatist feminists not support the January, ’92 generals’ coup?

They helped the regime to come back strongly from its coma, and later the regime’s policies dismantling any credible opposition, notably the Islamists who were the real physical political force and a tenacious opposition. They are in disarray without a charismatic leader, a global program and post-FIS strategy. The strategy of “hanging-out” with the regime in the Algerian Green Zone (Club des Pins) and next day going to the mosque to criticize a regime that feeds and protects these "politicians" -- Algerians are not that foolish.

Their future seems uncertain, despite a majority of Algerians who would vote for them if they did not enjoy the regime's garnished table under the ex-president’s system. The political equation will change, so two projects are pulling each other like a rope game: on one hand the nationalist coalition that makes the sociological cohesion structure of the regime, and liberal-secularist one whose base is still in the minority because of the elitist discourse of its leaders, which leave the neo-Islamists wondering where they stand in the new scheme of Algeria's politics post-December 12th presidential election.

Certainly the military are observing closely and watching with concern the level of oil and gas revenues (Baraka, blessing), because of the reported decrease in exportation in recent months — a revenue that should be equally distributed among the Algerians, thus the new mechanism for social and political demands emerging in the post-Hirak trilogy.

The FLN party’s masse organizations such as the powerful Labor Union (UGTA) on the social level and the role of the Zaouiyas or Tariqas on the societal level are still solid partners and intermediary corps for the military and the next president to use as a political wild card in any coming social crisis which lies ahead. The country is facing serious economic and financial crisis that needs urgent bold public policies from the next administration because any political amalgam would not only revitalize the Mosaic Hirak, but it would implode the entire Algerian society fabric into small pieces, and here it would be real change.