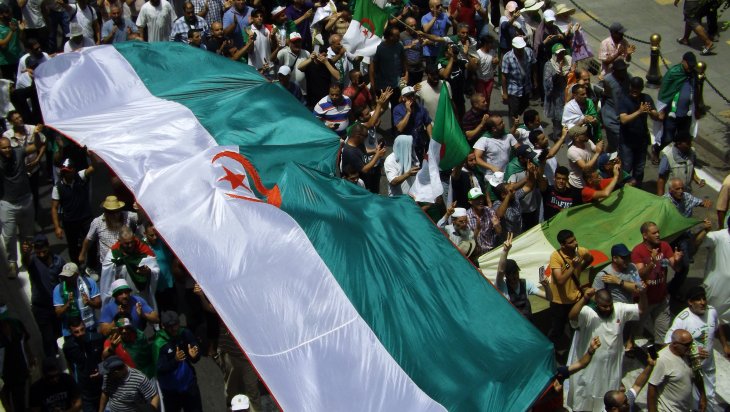 Algerians are still wondering about the February 22, 2019 peaceful Hirak’s achievements and animosity. According to the realist analysts, a large majority of Algerians agree on two important factors: the fall of the mask of fear and the country did not fall into political violence.

Thus, a new sociopolitical posture saw the light in Algeria. It did, however, free Algerians from being held hostage for decades by political leaders, elite, and the media. A political clientelism dominated the so-called political debate in Algeria for three decades, linking security with stability for their political survival. This sociopolitical posture opened up a new way of thinking and creativity “outside of the box,” and starting to break the populist discourse of change and continuity codes.

A political trajectory provoked the imperative of no-return to pre-Hirak years, imploding the political guardianship of any megalomaniac leader, oligarchic system, or even a solid physical political clientelist force like the FLN party.

Harmony of Change
Today’s protesters are maintaining the same slogans and discourse that were used in the glory days of the Hirak. Following the long break of the legitimate protests by two months, in the aftermath of the election President Tebboune on 12/12/19, a date that arguably ended the Hirak, there appeared a surprising guest on the world affairs’ and Algeria’s dinner tables. This was COVID-19, a pandemic that is changing the entire micro and macro-economics, and healthcare policies.

This minority of disenchanted students, disappointed unemployed youth, and radical secularist fringe are trying to revive the Hirak’s spirits with the same fever. They are calling “Hirak is the solution,” and for a “civilian,” not a military state, the release of detainees, asking the civil authorities and the generals to “leave” as well as questioning the legitimacy of President Tebboune.

Political figures are more or less are speaking on behalf of this nebulous radical opposition in the protest marches, known as the Democratic Alternative. Algeria’s incoherent social-liberal bloc’s whose electoral base is comprised heavily of ethnic fanatics in the region of the northeastern province of Tizi-Ouzou and Béjaïa. They participated last week in the march of the second year anniversary of the Hirak on February 22, 2019. They were Karim Tabbou, spokesperson of (DSU) Democratic Social Union party, Mohcine Belabbas, (RCD) Rally for Culture and Democracy party chairman, Attorney Zoubida Assoul, a vocal lawyer in Defense Committee for the Hirak Detainees and chairwoman of (UCP) the Union for Change and Progress party, representatives of the (FFS) Socialist Forces Front party, and a number of activists and lawyers affiliated with the coordination committee to “Defend prisoners of conscience,” such as Attorney Mustapha Bouchachi who want change without harmony.

From this perspective, the ongoing protest is undoubtedly a winter of seasonal winds. The winds are blowing a new understanding to let the new administration understand that there is nothing to be taken for granted as the previous administrations did. A political layer that could be compelled to give political concessions should also be included in the new political lexicon of the new Algeria.
These obstructionists did point out President Abdelmadjid Tebboune’s health status and differences within the military. Yet the Hirak peaceful movement wanted new mechanisms for equitable distribution of wealth and power-sharing, involving the masses in the local decision-making processes that concern their daily life.

Breaking the fear and the policy of the fait accompli
Nonetheless, the Hirak movement also revealed the inability of the entirety of the political parties, civil society activists, and a large part of the elite. This framed a coherent discourse that goes with the main demands of the Hirak: real change. Consequently, an entire generation seems lost in the elitist slogans of the Hirak on one hand, and because of the absence of trust in those political leaders, who were either passive or complicit with the oligarchs. This has left an ambiguous relationship to emerge between the military and the masses.

The immobility of the Hirak during these past months has weakened the obstructionists in the aftermath of the referendum on the drafted constitution last fall. Which let the rejectionists create a parallel populist discourse, vehemently questioning the legitimacy of both the president and his authority and the legitimacy of the new constitution that was voted for by Algerians on November 23, 2020.

Meanwhile, the soft opposition is trying to re-organize itself for the next June early legislative elections, a crucial political test for the administration and the political parties.
On the eve of the second year of the Hirak of February 22, 2019, President Abdelmadjid Tebboune in a solemn speech to the nation announced the dissolution of the (APN) Algerian parliament and called for early legislative elections next June, while he announced a minor government reshuffle and issued a pardon for dozens of jailed activists who were against the military and the president’s legitimacy and actions.

This slight government reshuffle has surprised the analysts. Not changing the prime minister who kept his post so that ministers who have been subjected to fair criticism from the people for their poor management.

The Hirak achievements and people’s expectations
Sixteen months have passed since the election of President Abdelmadjid Tebboune. The beginning of his term witnessed several challenges: a serious domestic political game of thrones needed to be settled at the high level of the republic, socio-economic issues must be taken care of quickly, and then a worldwide healthcare crisis has struck all of humanity, and the COVID-19 pandemic. In addition, the president faced political defiance in finding a compromise between the opposition and the elite.

He personally was hospitalized two times after contracting the Coronavirus, his absence left a political blur in the political, media, and even academic circles at home and abroad.

President Abdelmadjid Tebboune in his inaugural speech promised the Algerian people to achieve the change which millions of Algerians asked for during the 9 months of the Hirak against the system of former President Abdelaziz Bouteflika. This complex demand did not happen, yet it is further complicating the trust factor between the people and the authorities, civilian and military alike.

President Abdelmadjid Tebboune's persevered on the institutional front, last November putting in a drafted amendment of the new constitution before the voters for a referendum as another means of the peaceful political transition in Algeria. For the president’s critics, however, this move was without a real opening dialogue from the authorities. Though the referendum, later on, witnessed a ferocious reluctance from the voters to participate, 23% of the national voters showed up to the polls and the majority voted in favor of the new constitution.

Last month, this new constitution was signed into law and became the country's sixth constitution since 1962.

On the external front, lately, Algeria’s diplomacy got a wake-up call because the region is boiling. The country’s foreign minister Sabri Boukadoum met with the Malian authorities, he chaired the works of the 42nd session of the Monitoring Committee of the Peace and Reconciliation Accord in Mali. The meeting was hosted for the first time in the city of Kidal in northern Mali, resulting from the Algiers Accord in 2015. Meeting with Tunisian and Mauritanian counterparts, the Algerian foreign minister has made an official invitation to the new designated Libyan premier and the new Libyan council president for a state visit to Algeria.

Algerian foreign policy’s determinants include watching the borders with neighboring countries according to international laws; the principle of cooperation between neighboring countries; supporting the right of peoples to self-determination; resolving conflicts between countries with peaceful means; and not resorting to force and not interfering in the internal affairs of states.

In addition, the return of President Abdelmadjid Tebboune from Germany, who is slowly recovering from the COVID-19 virus, has sent a positive message to the people inside and abroad, and has boosted the morale of his cabinet’s members.

The Hirak was an opportunity to divorce from the old ruling generation for good. It has liberated an entire frustrated generation from the inferiority complex towards those corrupted politicians, opportunist elites, and arrogant corporatists.

This generation needs to get better organized in creating new political parties, civil society forums, help young leaders to emerge, and to trust the president and the military for the sake of a better Algeria at home, and not something or somewhere else. At the end of the tunnel, the real light that the president and military want to see is the Hirak’s 2019 light touch.