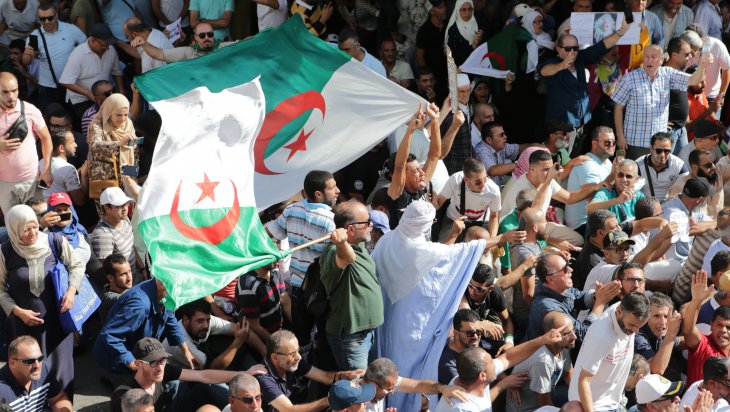 Sixty-five years have passed since the Algerian Liberation War broke out, a popular uprising that turned into seven and a half-years of a bloody war, one which forced the French to leave Algeria. France had colonized Algeria between 1830 and 1847; during that time European settlers took over the country, and Algeria became an integral part of France. While the settlers had full rights as French citizens, such privileges were extended only to a tiny minority of the native population, mainly Muslims, willing to renounce their religion.
The rest were subject to the notorious Code de l'indigénat (native code), which imposed special laws and criminalized the most minor insubordination. Any public statement challenging authority was classed as an offense.

In the 1920s Messali Hadj, a Communist factory worker and member of the PCF in France, and others founded the North African Star, a nationalist organization calling for an end to French rule in Algeria; in the 1930s Sheïkh Abdehamid Ibn Badis founded the Oulémas Association from which later movements for independence developed. In May, 1945 Allied victory celebrations in Sétif, Guelma and Kharata in eastern Algeria turned into a Muslim uprising, which was brutally crushed by French troops and settler death squads.

In 1954 younger militants, impatient with Messali Hadj, founded the FLN (National Liberation Front). On November 1st, 1954 they launched a wave of attacks across the country. The French government denied there was a war, treating nationalist fighters as criminals, calling them Fellagas (thugs) and terrorists. But militant resistance to French rule spread rapidly across the entire country.

The main parties of the French-left failed the Algerian test abysmally. In 1956 a new government was elected under the ”Socialist" French section (SFIO) headed by Counsel President Guy Mollet and François Mitterrand as Interior Minister. He set out to crush the rebellion by stepping up repression, and by the end of 1956 there were about half a million French troops in Algeria. But these revolts got no backing from any part of the mainstream left. In March, 1956 the National Assembly agreed on ”special powers", giving the army authority to detain and interrogate suspects.

The drudge of the war undermined France's parliamentary system. In May, 1958 there was a military-settler uprising in Algeria. General De Gaulle, a veteran right-wing military leader from the Second World War took over, establishing the Fifth Republic of which he became President. But despite his initial intentions De Gaulle could not hold on to Algeria. In 1959 he began to speak of "self-determination".

The war was becoming unacceptable to the French population. In 1959, 71 percent backed negotiations with the FLN. In October, 1961 the FLN called out its supporters for a peaceful demonstration in Paris, breaking the curfew imposed on Algerian workers. They were attacked by police and over 200 were killed. General De Gaulle had no choice but direct negotiations with the FLN. In March, 1962, after secret talks, an agreement was signed at Evian-les-Bains. This was put to a referendum and got 65 percent support. Right-wing settlers launched a final "scorched earth" campaign of violence and destruction, but could not prevent the inevitable. Algeria became fully independent on July 5, 1962.
The Evian Peace Accords were signed in the French resort town of Evian-les-Bains, after a long negotiation process between the FLN and General De Gaulle, bringing to an end the violent seven and a half-years long war. It was a war seen by the French as a "civil war", whereas Algerians proudly see it still as a liberation war. More importantly, the Accords terminated 132 years of harsh occupation, and the signing of these Accords laid the grounds officially for the birth of the Algerian nation-State on July 5th, 1962.

Hence Algerians joyfully celebrated their political victory, looking forward full of hopes and dreams to their young nation-State. Thus Algeria became the Mecca of national liberation movements around the world. However, the Algerian dream did not last long, for some months after the signing of the Accords and the historical referendum on self-determination, Algerian leaders, notably the military branch, lost the definition of "accord" and adopted the strategy of "disaccord" with anyone who questioned their policies.

Thus in both capitals the Evian Accords remain a cloudy chapter in the Franco-Algerian love-hate relation. Politicians use it for their cheap political means and people in France don't care at all, so Algerians' cynicism about their politicians' failures and corruption still push them to go swimming to France when the fiftieth anniversary of the Evian Accords fell just in the middle of the French 2012 presidential campaign. President Sarkozy, seeking a second term against the “socialist” party candidate François Hollande, speaking before an audience of “harkis and pieds-noirs” in Nice, France, re-opened old wounds when he stated that France would not "apologize" for the Algerian war. It is these same “harkis and pieds-noirs” who represent a solid voting reservoir for the ex-FN (RN) far-right extremist party and virtually for the French right party (LR).

This silly idea of asking for public apology was also on the FLN party Chairman's menu who said, "France has no choice, but to apologize."  Fifty-seven years later, the relation between the two nations is a sweet, minty taste in the mouth of the two nations' leaders. The FLN party leaders and ex-President Bouteflika oligarchs were justifying their mediocre gamble on the issue, but Algerians are not that duped. The post-Evian Accords' generation is profoundly disappointed, believing their leaders violated the spirit of the  November ’54 ideals. Indeed, their oligarchic system dared to eliminate the man who put the Algerian seal on the Evian Accords. So the November ’54 spirit was widespread throughout the Feb, 22nd  Mosaic Hirak Act I in 2019.

It is ironic when one looks today at the political impasse of Algeria. People are asking their leaders what their parents and grandparents courageously extracted from the French: in a word, dignity. It is sad to read and hear that 70% of the Algerian youth want to emigrate to France legally or illegally. It is heartbreaking to read also that every day Algerians die drowning having boarded those boats of death in the Mediterranean Sea, to leave al-Hogra (injustice) for al-Harga (illegal immigration). I hesitate to draw this parallel with the Europeans' time, but for those of today and those who left in 1962, the same slogan applies, La Valise ou le Cercueil (suitcase or coffin).

Nowadays, the young are leaving without a suitcase and are not sure to come back in a coffin.

The true celebration of the November ’54 liberation lies in Algerians bravely challenging their political leaders and the elite for a new social accord that respects their human rights and lets them take charge of their destiny. An echo to honor the November generation's legacy is for Algerians to elect next December a President who was born after the Evian Accords and put an end to the rule of the “revolutionary” legitimacy.