Algeria: The Citizen Hirak in a Time of Socioeconomic Depression & National Tragedy 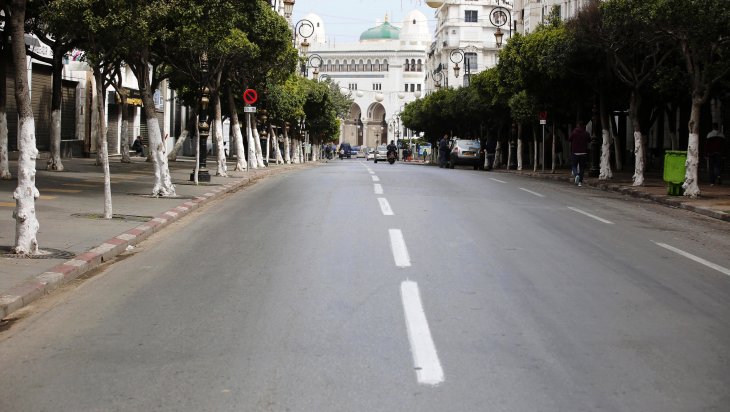 In Algeria, aside from the Red decade of dystopian groups’ terrorism and tragedy of state counter-terrorism acts, 1992-2000 was the gravest crisis in Algerian post-modern history. But for all the suffering and the ultimate effects of fear and the socioeconomic depression of the Red decade, it was reassuring to stand united. This led to an era of political stagnation and corruption which manifested during the two decades of the ruling Bouteflika system.

Ex-President Abdelaziz Bouteflika’s administration attempted to cope with the problems of the state security and less with people’s safety or offering a national reconciliation. Yet unemployment, and the disintegration of the Algerian economy increased and it was a time when a significant number of Algerians hated politicians and politics. Paradoxically, the turmoil of the 1990s turned out to be predominantly socially conservative and fiscally irresponsible in its impact on Algerian society.

The Red decade taught Algerians the need to endure and survive hard times rather than to take risks with one’s life or money. Moreover, faced with the specter of oligarchs under the Bouteflika system, Algerians rediscovered cronyism and incompetency instead of virtues of democracy and human decency.

Thus, two decades of the Bouteflika system were marked by fundamental, even radical social change, which ended for most with a reaffirmation of Algerians’ cultural past and their traditional political ideals. Hence the February 22nd, 2019 mosaic Hirak, which did, however, resurrect an ideal that never dies.

Following the pandemic of coronavirus that is striking worldwide, medical professors, members and professionals of the medical fields are urging Algerians to become aware of the dangerous nature of this virus, which is spreading quickly in the country. Last week President Tebboune met with the state’s Security High Council, the second meeting since he took office in December 2019. President Abdelmadjid Tebboune chaired the meeting to implement a plan to face Covid-19.

The meeting issued lockdown measures, notably on the province of Blida in the fertile plain of Metidja (Blida province shares borders with northern provinces in the country like Algiers, Tipaza, Boumerdès, Medéa, and Aïn Defla).  These lockdown measures are related to many sectors and are designed to give the flexibility that economic operators demand, especially those who hold investment projects, especially in the field of small and emerging institutions.

Undertaking all the incentive measures related to the implementation of the new policies that are detailed in the government’s business plan, including the oil price that fell drastically in international markets, will cause a huge loss for the country in terms of foreign revenue of one billion dollars in a period that does not exceed two weeks.

The spread of the coronavirus and this pandemic has made Algeria declare a public health state of emergency in 13 provinces to contain the spread of the Covid-19 virus. This includes a ban on mass transportation, and the discharge of 50% of public office employees, and urging people to stay-at-home. The country officially had about 716 patients who tested positive for Covid-19 and at least 44 are dead.

Nevertheless, the radicals in the Hirak were hoping for Hirak season II, yet once again a political movement and social change are not inclusive and revolutionary in a time of national tragedy that is affecting people’s safety and the state’s national security. Calls to hold protests have been increased and recently have been banned under President’s Tebboune’s public health state of emergency law. Meanwhile the government continues his carrot-and-stick policy for more containment of the Hirak and the radical figures in the Hirak accuse the authorities of using coronavirus to tackle and end the popular movement for good.

The protesters are worried after the arrest of Khaled Drarni, a freelance journalist, who was a former Echourouk News’ TV anchor, French edition. Khaled Drarni resigned from the network weeks before the spark of the Hirak. He became famous via his tweets and appearances on French media. His followers made him Hirak’s “face”, so that Karim Tabbou, former FFS party Chairman and spokesperson of l'Union démocratique et sociale (UDS), is jailed and facing trial for insulting the military institution.

Lately attorney Mustapha Bouchachi, one of the Hirak’s faces, has expressed support for a pause and most of the opposition political parties have done the same. The student organizations finally have announced a postponement of the peaceful protest on Tuesday. The day has become a national mobilization of the students. In a joint statement, they were responding to the call of the doctors who participate in the Hirak.

A public health crisis, Covid-19, is changing the entire world population’s social and public health behavior. A citizen Hirak came to light from the mosaic Hirak of February, 22nd 2019. Students and civil society group members gathered in the capital, Algiers’ main campuses and neighborhoods. Students are motivated for a noble cause that has touched the whole of humanity. Interestingly, their government’s public health policy and healthcare system as a whole and operations raising awareness were launched against the rapid spread of the deadly virus across the country.

This shifting public health crisis leads to the mobilization of a citizen Hirak that has been noticed in several provinces such as Blida that is in a full public health state of emergency. In the provinces of Béjaïa, Tizi-Ouzou, Batna, Constantine, Annaba, Oran, Tlemcen and al-Oued where groups of Hirak activists have begun to disinfect and distribute masks and gloves to the passersby and have a general campaign of disinfection, including bus stops, railway platforms, parks, and roads, etc...

Algerians continue to discover the two decades of corruption and incompetence of ex-President Abdelaziz Bouteflika and the collapse of the entire health care system.  In the summer of 2018, the region of Blida province and its neighboring provinces were hit by a cholera outbreak. The epidemic then led the ex-president Abdelaziz Bouteflika to sack the provincial wali (governor) because of filthy streets and public areas across the province that, ironically, the city of Blida calls the “City of Roses”! The poor knowledge about the transmission of cholera had allowed the disease to spread and hit the towns of Algiers, Blida, Tipaza, Bouria, Medéa and Aïn Defla.

Algerian healthcare authorities for their part, have been bitterly criticized for their weak response to the outbreak. They have been accused of waiting too long to announce the presence of the disease and to have made contradictory statements about the origins of the outbreak. The summer of 2018 cholera outbreak and epidemic was not a wake-up call but a knock-out punch to the entire Bouteflika system.

The majority of the intellectuals, national athletes and artists, like their fellow citizens, have joined the March of 2020 citizen Hirak, that bridges once again the society and the authorities. They have been showing full support for president’s Tebboune administration, with a growing number of Algerians lined up behind the president and his premier.

President Tebboune ordered “all State institutions and services to raise the threat alert level to the highest level, and ensure constant coordination among them so that the citizens feel safe because any neglect or inaction leads to a slowdown in saving lives and increases the area of the pandemic.

President Tebboune asserted that citizens’ primary responsibility is for discipline and to respect the preventive measures. He praised every effort to uphold the nation’s interest in this difficult circumstance and praised everyone who took preventive action to protect him/herself and the community.

The state is preparing for all possibilities to prevent and fight the spread of the pandemic which it will overcome with solidarity, discipline and patience. Though the masks of politics have fallen and the gloves are off today, Algerians, like the entire population across the world, are desperately wearing masks and gloves for prevention from this invisible enemy, Covid-19 and fear of socioeconomic depression.