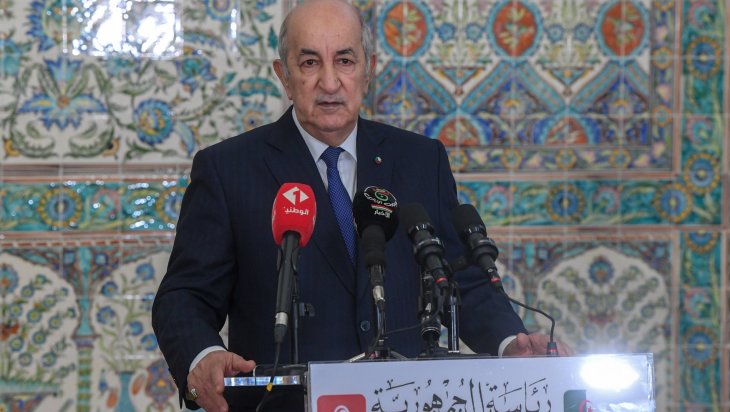 Since his election in December 2019, Algerian President Abdelmadjid Tebboune has been active on the thorny Libyan dossier. His action is based on regional and sub-regional security imperatives. The Algerian president, though, is pushing vehemently for a political solution in Libya, while all the indicators on the ground show that the military factors and movements of the belligerents are on the rise.

During his monthly interview with the Algerian national media on July 20th, President Tebboune stated that Algiers is willing to mediate in the Libyan crisis in order to find a solution to the ongoing civil war that has been tearing the country apart for almost a decade, and won't let Libya turn into another Somalia. On June 20th, the head of the legitimate government (GNA), formed with the agreement of Libya's main political factions, and following the Skhirat Agreement, (a United Nations–led initiative in 2015), Fayaz As-Sarraj, met with President Tebboune in Algiers.

The repeated visits that either As-Sarraj made or a special envoy from the Haftar camp made to Algiers in the last six months show how Algiers is concerned about the current situation of political and security turmoil in Libya.

From the spark of the political crisis in 2014 two outcomes followed that led to the ongoing armed struggle between a legitimate government recognized by the international community on the one hand, and a putschist self-declared military chief backed by a fragmented parliament in the eastern coastal city of Tobruk on the other. Haftar is militarily supported by an odd axis of super and regional powers (Arab and European countries) the so-called Abu-Dhabi-Moscow-Paris-Cairo axis. The Algerian position has been clear from a national security and domestic stability standpoint. In the aftermath of the fall of the Al-Qaddafi regime in February 2011, the national security obliged, the Algerian army secured the borders with Libya, kept a close eye on the Tunisian ones, and enforced its long borders with the two Sahel countries, Mali and Niger.

Hirak Imperatives
Later in the Libyan crisis, Algeria had to deal with its domestic power struggle between the army and the intelligence service. This is in light of the power vacancy caused by the disease of ex-president Abdelaziz Bouteflika who had a minor stroke in May 2013 that incapacitated him until his forced “resignation” in April 2019 by the military. This was in the aftermath of the Algerian peaceful Hirak that started in February 2019.

Thus, there is Algeria’s new Libya policy or, one could call it, President’s Tebboune doctrine, which is based on mediation and precaution.

Nonetheless, the Algerian military has been given the central role in managing the Libyan dossier. Because of the country’s national security imperatives and political stability, the generals in Algeria found themselves in power struggle within the intelligence service and the ex-president’s circle, notably in the aftermath of the Aïn Amenas gas facility terrorist attack in Illizi province in winter, 2013. The Algerian approach rests upon strategic national security on its eastern and southern borders. As the political and security situation in Mali exists, the military are coordinating with the president’s national security team on the Libyan dossier in Al-Mouaradia Palace. It should be remembered that the military in the Defense Ministry HQ, like the civilians in the Foreign Affairs Ministry, is still anxious if not traumatized by the kidnapping of the seven Algerian diplomats in the northeastern  city of Gao in Mali by the Armed Islamist group in spring 2012.

It is worth mentioning that the military in Algeria is closely watching the country’s western borders with Mauritania and Morocco. On the Mauritanian border, Algiers and Nouakchott have opened a new crossing point that will be secured and managed in a regulated manner in order to ensure the transit of people and goods. The military oversees the complex dossier of the Western Sahara as they follow the presence of the terrorist groups, human trafficking, and the influx of migrants from the Sub-Saharan countries crossing to Europe.

The New strategy of containment
Libya is considered to be an extension of Algeria’s strategic dimension on the east side, but Libya has always been a defensive line towards the other pivotal states in North Africa. An example of these would be Egypt, which is seen as being another rival country in the sub-regional system.

Algiers insists in its foreign policy doctrine on the rejection of any foreign military role and presence in Libya. This explains Algeria's position rejecting the intervention of the North Atlantic Treaty Organization (NATO) against the Al-Qaddafi regime in winter 2011. On the other hand, this expresses the longstanding relationship that existed between Algiers and Tripoli throughout the long period of Colonel Al-Qaddafi's ruling era (1969-2011).

The fall of the Al-Qaddafi regime had pushed the military in Algiers to review the entire Sahel strategy. In this instance, a new military doctrine has emerged in light of the draft of the new constitution that is being debated on as a debate mentioned in the drafted constitution, article 29. This means that Algeria might, within the framework of the United Nations, the African Union and the Arab League States, participate in peacekeeping operations.

In addition to a new military doctrine, the president can decide to send troops abroad after a two-thirds majority vote in the two chambers of the Algerian parliament according to Article 95, amended.

The rise of terrorist groups as a threat in the Sahel and the political turmoil in Libya have expanded the Algerian military’s spending on the 650 miles of Algeria-Libya borders to ($500 million per year) It has doubled and thousands of national guard soldiers have been permanently deployed and mobilized.

However, the new Algerian approach is following the defeat of the Libyan National Army (LNA) forces by the GNA forces in most of the western region, and their retreat in the Gulf of Sirte. This has become the demarcation zone between the west and the east of the country.

Yet the growing international disagreement on the Libyan crisis between the so-called Ankara-Doha axis on one side and the Abu-Dhabi-Moscow-Paris-Cairo axis on the other, presents further obstacles for the two main neighboring pivotal states, Algeria and Egypt. These obstacles would be not being an honest broker between the main belligerents in the conflict. Egypt is oddly siding with the Abu-Dhabi axis for purely financial and “ideological” (fighting political Islam) reasons and is jeopardizing its national security and strategic role in the region in the long run.

Algeria found itself cornered because of its “no-problem” foreign policy with all the international and regional actors involved in the Libyan conflict. This is a position that has allowed Algiers to act quickly in response to the Egyptian initiative that did not echo well in Algiers. Algeria found the initiative unbalanced. Hence President Tebboune's new Libya policy is based on mediation and precaution, having strong relations with all of Libya's tribal and political leaders in the west of the country, and including what is left from the Al-Qaddafi regime, his son, Saïf Al-Islam.

On the other hand, the military in Algiers does not see Khalifa Haftar as a reliable partner. According to Algerian intelligence sources, the military has been trying to convince Paris to abandon him. Meanwhile, they are already looking for his replacement by the Speaker of the Libyan Council of Representatives in Tobruk, Chairman, Aqila Saleh, who was expected to make a two-day visit to Algiers last weekend to meet President Tebboune. The visit was canceled at the last minute.

The military’s long-term security vision
Algeria’s new Libya policy is a combo of its classic foreign policy doctrine and a new military doctrine. In other words, the military is approving regional and international actors to get involved, regardless of whatever way it goes with their own national security and geo-economic interests, meanwhile Algiers is having a say and a large maritime maneuver in the Mediterranean, while securing its wild desert for national security and domestic stability reasons.

The military in Algiers, which has been managing the Libyan crisis, knows well that coordination of the Maghreb countries in the Libyan conflict is a must. This is despite the limits of the countries who are fully favoring legitimacy over anarchy, recognizing the GNA, and are supporting a political solution in Libya.

During his visit to Moscow on Wednesday July 22, Foreign Affairs Minister Sabri Boukadoum of Algeria with his Russian counterpart in a joint press conference agreed on the role that Libya’s western and eastern neighboring countries should play.  This would be an active role because this is about security and stability in the entire region.

Yet the Libyan civil war is starting to look like the Lebanese civil war (1975-1989). Algeria played a major role in the 1989 Taïf Accord that led to the end of the civil war.