Algeria’s New President Threw the Apple of Discord at Paris 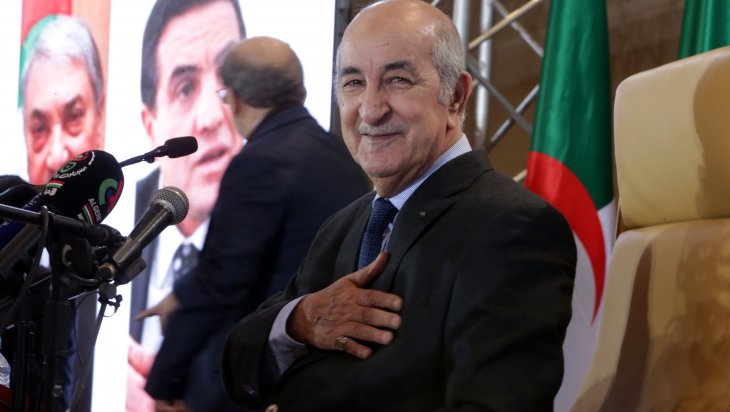 Relations between France and Algeria have gotten tense, which is leading to troubled waters under President Macron’s bridge with Algiers. He told reporters in Brussels regarding Algeria’s new President Abdelmadjid Tebboune, that "I have come to know that Abdelmadjid Tebboune won the Algerian presidential election in the first round, and I hope for authorities to engage in a real dialogue with the protesting populations."

It’s an unusual comment from a French President towards his counterpart in Algeria, since traditionally France is the first country on the planet to congratulate the newly “elected” Algerian president, even before the official announcement of his election.

Algeria’s President Tebboune did not waste time in responding to the French president’s statement. When he was asked by reporters in Algiers about President Macron’s comment on his election, the president said: "I have no comment, he (Macron) is free to market the goods he wants in his country, I only recognize the Algerian people.”

President Abdelmadjid Tebboune, 74, was elected Algeria’s eighth president with the vote of 58.15 percent in the presidential polls held on Thursday, December 12th. More than 4.9 million voters chose the president-elect out of 8.5 million expressed votes.

What went wrong? Other nations sent their congratulatory messages like the Egyptian President, King of Morocco and other Arab and African countries, but also Russia, Spain, Italy and the U.S congratulated him, too. However, President Macron is busy at home dealing with the specter of the Yellow Vest and hundreds of thousands of protesters, who are paralyzing France’s public transportation and hospitals in this high-scale strike movement. Thus, the Algerian Hirak changed the dynamic and the trajectory of the relations between Paris and Algiers.

This change has brought an end to the “velvet” relations between Paris and Algiers in the light of the purge operation headed by the military Chief of Staff General Ahmed Gaïd Salah against the ex-president’s oligarchs who have close ties with France’s President -- like Issad Rabrab. Rabrab is an Algerian billionaire currently jailed in al-Harrach prison and CEO of the Cevital group who was among then-French Presidential candidate Macron’s campaign donors. he had a similar relation with Ali Haddad, former boss chief of the “Bosses” who is also jailed.

Last week Algeria’s new Ambassador to France, Salah Lebdioui, presented his accreditation to the French president as the new Ambassador and plenipotentiary of the People's Democratic Republic of Algeria to the French Republic. A “strategic” position, the appointing process started in September 2019; Salah Lebdioui succeeded Abdelkader Mesdoua, who headed this strategic post for more than two years.

It is important to mention that Abdallah Baali, former Algerian Ambassador to the U.N. and the U.S., was rejected by Paris before he joined President-elect Abdelmadjid Tebboune’s campaign, a sign of Paris’ stance about the persona and the diplomatic background of Ambassador Baali. Some analysts in France believe that the new president of Algeria is hostile to the French interests and is pro-American. They based their analysis on evidence, that two years ago President Tebboune, when he was the Prime Minister, implemented tough measures against French agricultural products.

He dared to ban the import of French apples due to suspicions of inflating the bills after he investigated its price at its source and what was being marketed in Algeria. This caused a stir among farmers in France and the usual suspect alliance at home by some of the ex-system oligarchs, a bold policy that cost him his job. He was fired after eighty-nine days in office as Premier (the shortest term of a Premier in Algeria since 1979).

This was because he threw the apple of discord at Paris.

On the other hand, Algerians see their French counterparts behind the provocations coming from Paris. InOctober 2019, the Algerian authorities arrested French MP Mathilde Panot in Béjaïa east of Algeria, who, with her deputy Mourad Tagzout, was “meeting the actors of the Hirak popular movement” in this sensitive ethnic area of the country. MP Panot is the Vice-president of the parliamentarian group of the left wing party La France Insoumise.

Lately the amateurish motion of the European MP Raphael Glucksmann at the E.U. Parliament suggested calling for a discussion of the current Algerian political situation, which provided a further irritant. Glucksmann headed the Socialist party list in last summer’s European election and he is a French philosopher like his father André  Glucksmann also spoke twenty years ago on Algerian political turmoil and violence, calling the Algerian civilian war “a war against the civilians.” A comment read in Algeria and certain to stir up a bees' nest.

Further, there were news reports in September 2019  that the preeminent and active French Ambassador Xavier Driancourt in Algiers had requested to be relieved from his position due to difficulties in carrying out his diplomatic mission amid the rising tumult with the Algerian authorities related to  his close ties and contacts with the pro-France political party leaders, elite and the oligarchs from the ex-Bouteflika system.

President Macron sounds like a pragmatic leader and his foreign policy in the region would not be surreal. This is also a time when the Maghreb countries are enjoying some breeze of freedom and a ray of hope. Presidential and parliamentarian elections in Tunisia in September 2019 sent a strong message to Paris; hence last Thursday’s presidential election in Algiers also, and this time it’s not the “Islamists” who are winning, but the people who are saying "it’s enough" to the French hegemony and contemptuous attitude towards their people and their elected leaders.

Paris should approach all these disturbances in the Maghreb region with a strategy aimed at stabilization of the countries, intelligence, military and law enforcement cooperation, and more importantly, an economic agenda to contain the exodus of illegal immigration (haraga) and migrants. Eventually it will help the region's leaders launch the U.M.A. (Arab Maghreb Union) to obtain a cohesive foreign policy based on partnership. This partnership would be not only with Paris, but on a regional level with Brussels as well. Regional leaders are still taking an idea to “act” from the election of President Abdelmadjid Tebboune like President Macron who took “note.”

Whatever President Macron's new Algerian foreign policy will be with the administration in Algiers (civilians or military alike), he should focus on the historical relations between the two countries. Algiers has more room today to diversify its foreign policy under the new determinants with new partners like Turkey for instance. Also, Algiers’ foreign policy in light of the tri-polar system of Washington, Moscow and Beijing, would irritate the soft liberal French President, whose foreign policy looks like his domestic policy, forgot in terms of foreign policy. This could be described with the statement, "There are neither foes nor friends, only interest." as General De Gaulle put it.

Despite these dramatic political shifts in Paris’ foreign policy, the national security question caught him in the middle of his term, so he should re-orient his focus on a "war on terror" à la Bush. Hence his ‘herculean’ project of “rebuilding” the Sahel and finding a new paradigm in his Sahel foreign policy was an "all-bets-off" endeavor for a determinant President like President Macron.

His Libyan policy, however, is a quagmire, which has caused France a lot of damage in the region he should consider Algeria, as a full sovereign country if he wants to stop the leak of troubled waters under the paper bridge.