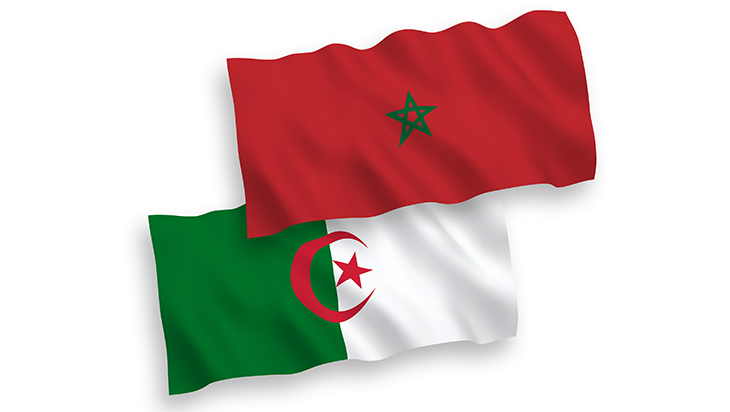 After years of relative calm, these past weeks have seen the rise of one of the hottest levels of diplomatic tension between the Moroccan and Algerian governments to date. News media battling between the two capitals is not new, and recent statements from Moroccan officials signal an alarming escalation that seems predictable relative to recent weeks’ developments. Although relations between the two pivotal Maghreb countries have intensified, they know each other well, and if they want, there is a landscape of entente that, at the end of the day, will not facilitate further verbal escalation.

So far, Algiers is favoring a prudent approach, whereas Rabat remains on the offensive at least in rhetorical speech. The current level of tension can be traced initially and with certainty to the African Union summit in Addis Ababa, Ethiopia in late January 2020. Algeria has been a powerful voice on the thorny question of the Western Sahara, although it is not a party to the conflict -- the new Algerian president reiterated Algeria’s position on the Western Sahara in a statement to the Algerian media. “We said and we will repeat this, no matter the amount of insults and pressure we receive, the issue of Western Sahara is an issue of decolonization.” Algiers’ position on the Sahara question is about the Sahraoui people’s right to self-determination, which is the right of people to determine their own destiny.

This diplomatic tool was at the lead-up presentation to the U.N. Security Council in 2013 conducted by Christopher Ross, former U.N. Secretary's special envoy for the Western Sahara, at which he offered his findings on the Western Sahara question based on a visit to refugee camps in Moroccan-held territory and those in Tindouf, Algeria. While the U.N. had refrained from imposing a solution in this longstanding dispute, the Polisario Front and the Moroccan government maintain positions that are mutually exclusive, and neither had been willing to concede. Mr. Ross' report, however, announced "a new phase in the negotiations based on discreet and separate bilateral exchanges with each of the parties."

Thus, recently tensions rose dramatically when the Moroccan Foreign Affairs Minister Nasser Bourita had strongly attacked Algeria, against the backdrop of its stance towards some African countries’ opening of consulates in La’ayoun city that the Polisario Front considers the capital of Western Sahara.

However, Algeria’s Foreign Affairs Minister, Sabri Boukadoum, responded: “we never said something against Morocco. We always think of the future and we don’t think of building a relationship based on insults and inappropriate words.” This boring ping-pong forehand exchange re-opened an old wound when, in 2017, Algeria’s justice minister delivered a speech on behalf of ex-President Abdelaziz Bouteflika calling on the U.N. to support efforts aimed at setting up an international mechanism to monitor "the massive and systematic human rights violations" by Morocco in Western Sahara territories. Rabat's response to the speech, carried by Moroccan media, was seen by governmental circles and political parties, notably al-Esteqlal (Independence) as a deliberate provocation.

Analysts linked the plea for intervention directly to President Tebboune's new foreign policy doctrine and action unlike the ex-president who was tied with internal power struggle against rivals in the regime. Tensions escalated before in November 2013 with Moroccan protesters as Algeria marked the 59th anniversary chanting anti-Algerian slogans. One of the protesters climbed up the building of Algeria’s general consulate in Rabat and tore down the Algerian flag. This incident caused widespread consternation across Algeria, as well as in the independent media and social networks.

Algerian Foreign Ministry spokesman Mr. Amer Belani said, "this serious act would not have been possible without the unleashing of hatred and mudslinging by the Moroccan press and the political class to inflame the population against Algeria." Historically tense relations between the two countries go back decades to 1963, to an episode known as the "Sands' War," fought over territorial claims to southern border regions. Since then, the relationship has been further strained by Algeria's support for the Sahraoui people's quest for independence, a struggle continuing since Morocco annexed the territory after Spain left in 1975. In 1976 violent army confrontations occurred between Moroccan and Algerian troops in Amgalla (Western Sahara). On February 27th, the Polisario declared the Sahara Arab Democratic Republic (RASD). On March 7th it broke off diplomatic relations between Algiers and Rabat.

In 1988 on May 6th, it restored diplomatic relations between the two capitals. These events mark the first renewal of hostilities since April 2013, when Algeria supported a U.S.-sponsored proposal to integrate human rights monitoring into the remit of the U.N. mission in the Western Sahara. The initiative was ultimately defeated in the face of vehement opposition by Morocco and its allies with the passing of a U.N. resolution (UNSCR 2099).

Last month President Abdelmadjid Tebboune told the French right-wing paper, Le Figaro, in a long interview, “even when Algeria proposes peaceful solutions to regional crisis, Moroccan lobbies always find a way of intervening.” The elusive destiny of the Western Sahara reflects a deep crisis posed by double-edged diplomacy, and regional imperatives are changing the foreign and defense policies of both capitals. Algiers particularly is plagued by elevated national security issues with its southern and eastern borders.

Additionally, both capitals have come under increasing pressure over their human rights records in recent times, Algeria is recovering from a one-year peaceful popular protest and the regime’s internal bloodless trench war. Meanwhile Morocco is sitting on a social volcanic eruption and analysts feel that this latest round of diplomatic dispute is mostly a convenient distraction that works to the advantage of both capitals. These disputes represent a sad situation for most people in both countries.

Yet Algeriaʼs CAN 19 Africa Cup win last summer created enthusiasm and hope between neighboring countries, notably Morocco. When Algeria won the ﬁnal match against Senegal, thousands seized the occasion to take the Kingdomʼs major cities, joyfully chanting: “one, two, three viva lʼAlgérie,” asking to open the borders. An example is like Ahmed, an Algerian fan from the city of Oran who lives in Casablanca, screaming on Moroccan M2 TV who called this “ofﬁcial” political tension shameful, senseless, and inhuman for families who have siblings living in the two countries. As a result, a solidarity sentiment formed between the two neighboring countries, whose borders closed in 1994 for national security reasons.

Moroccans and Algerians demonstrated their desire, marching in the small border cities of Saïdia-Marsa in Oujda, Morocco and Maghnia, Algeria. Activists on social media launched an #OpenBorders hashtag, hoping that their respective governments would put aside decades of dispute that have jeopardized the humanitarian and economic needs of generations on either side of the political tension between the two neighboring countries.

It is especially true of events which took place on the anniversary of the Algerian revolution, a revolution that found support among the Moroccans in aiding Algerians in their struggle for liberation. Also, the people still believe in the edification of the MAU (Maghreb Arab Union), which has been on hold since 1994; certainly, the Sahara question is one of the obstacles for the MAU as well as the issue of Islamism and the Berber question.

Despite the sour media exchanges of these past weeks, one could look for prospects for unity among the Maghreb people if only at the level of culture and sports. Thus, the history of the two countries and the relations between their peoples remain intact, despite the national chauvinism that could be noted even in France in the control of Mosques and the inter-Arab community cultural activities. Algerians and Moroccans are aware of this toxic diplomatic tension; however, they believe in their brotherhood and that is what unites them more than it divides them.