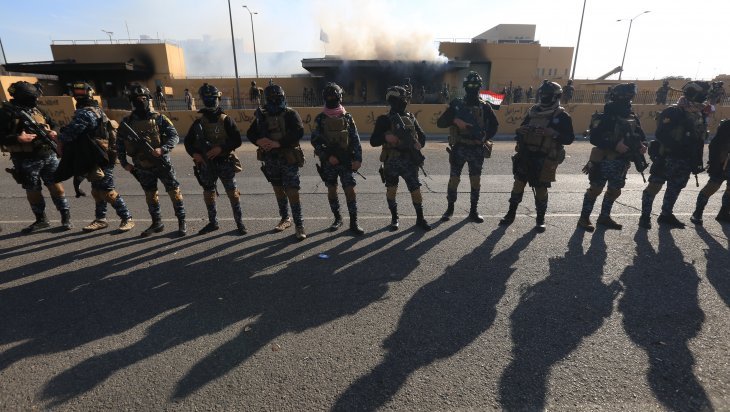 The rocket attacks against the Camp Taji military base in the north of Baghdad, Iraq’s capital city on March 11, claimed the lives of two American soldiers and one British while wounding twelve others. While no one claimed responsibility for the attack, American officials claim that the style of the attack resembles that of the Iran-backed militia in terms of tactics and equipment. The US-led anti-ISIS coalition aircraft carried out strikes against three bases of the Iran-backed militia killing thirty fighters near Abu Kamal in the Syrian province of Deir ez-Zor along the Iraq-Syria border. In addition, American aircraft launched numerous strikes against the Hashd al-Shaabi bases in the provinces of Kirkuk, Babil, Kerbela, Salahaddin and Anbar just after the Camp Taji attack. While tensions were still running high, another missile attack took place for the second time in one week, against the Camp Taji military base that hosts American soldiers. It is expected that the USA will not step back from its existence in Iraq and will adopt more open and harsh policies against the Hashd al-Shaabi organization together with the reciprocal attacks that are part of the long-standing tension between Tehran and Washington and contain various messages in terms of Iraqi domestic politics.

On 27 December 2019, an American citizen was killed in an attack against the K-1 airbase of the USA in Kirkuk and the American forces retaliated by attacking the Hashd al-Shaabi  bases in Anbar, killing thirty militia soldiers. The tensions led to the killing of Qassem Soleimani, commander of the Qods Force of Iran’s Islamic Revolutionary Guards Corps (IRGC), and Abu Mahdi al-Muhandis, Deputy Chief of the Hashd al-Shaabi Committee, by American airstrikes on January 3rd. Iran has announced it has ‘avenged’ Soleimani by launching ballistic missile attacks on January 8th against the US bases in Erbil and Anbar. In addition to that, the Iran-backed militia groups such Asa’ib Ahl al Haq and Qataib Hezbollah, which are among the most important components of the Hashd al-Shaabi organization, threatened the USA by stating that they would target the American presence in Iraq. In this respect, Iran seems to have preferred to use the militia groups within the Hashd al-Shaabi organization as proxies instead of escalating tensions with the USA and thereby avoiding direct confrontation.

In other respects, one can possibly claim that the USA targets the Iranian proxies instead of directly targeting Iran. It seeks to avoid the high political and military costs associated with a direct confrontation with Iran. Therefore, it retaliates against Iran by hitting its proxies. The USA has been designating some militia groups as terrorists since last year and targeting them with sanctions. Lastly on February 27, Ahmed Hamidavi, Secretary General of the Qataib Hezbollah militia group was added to the ‘global terrorist’ list. Moreover, the majority of American airstrikes against the militia groups were conducted against bases belonging to the Qataib Hezbollah militia. Therefore, even though no group has assumed responsibility, some comments indicated a possible Qataib Hezbollah involvement in the attacks against the Camp Taji, which has an important geographical location on the north-south and east-west axis, because the organization praised the attacks. At this point, the Qataib Hezbollah militia group, one of the leading forces among the Iran-backed militia in Iraq, can be considered to be the most suspicious actor in terms of equipment capacity. Thus, after the American airstrikes against the Qataib Hezbollah headquarters in the Syria-Iraq border, its arms depots in Iraq were also hit.

It can also be observed that the Iran-backed Iraqi militia groups have carried out more than twenty attacks against the American presence in Iraq since December 2019. Iraqi Shiite militias, who suffered from internal problems after the death of al-Muhandis by airstrikes, have sought to indicate that they continue to escalate tensions against the USA by conducting the Camp Taji attacks. The Hashd al-Shaabi organization and its political affiliates in the Iraqi parliament presented an advisory proposal to the government about the expulsion of the American forces from Iraq after the assassination of Soleimani and al-Muhandis, and it was accepted. The aforementioned attacks and retaliation might imply an intention about bringing the issue of the American presence once again to the agenda. Furthermore, March 11 is the birthday of Qassem Soleimani, who was killed in an airstrike. Considering the fact, that the Shiite tradition reveres symbols, the first Camp Taji attacks have a symbolic character.

At this point, it is anticipated that the US will give a more direct and tougher response against the Shiite militia groups and will not step back in the discussions about its presence in Iraq given its quick retaliation against the attacks against the K-1 and Camp Taji attack. The US preferred to put pressure on the Hashd al-Shaabi organization with diplomatic sanctions until the attack on the K1 base. The USA did not assume responsibility for the attacks against the groups’ bases in summer months, which, according to some discussions were outsourced to Israel. However, by killing Soleimani and al-Muhandis on January 3, the US demonstrated to both Iran and the Hashd al-Shaabi organization, that it would not withdraw its presence in Iraq, that it would be more aggressive after the attacks against Camp Taji, and it would openly target the organization. Also, despite the resolution taken by the Iraqi parliament after the assassination of Soleimani to expel the foreign troops in the country, the US shows no sign of withdrawal with its latest operations. Moreover, it is likely that the US will seek ways to increase influence on both Iraqi domestic politics and security mechanism.

The appointment of Abu Fadak, one of the Qataib Hezbollah militia leaders, as the Chief of Staff of the Hashd al-Shaabi organization after the death of al-Muhandis is likely to discomfort the USA. Some militia components of the Hashd al Shaabi organization, which are followers of Ayatollah Ali Sistani, the most powerful Shiite marja in Iraq, oppose the appointment of Abu Fadak. Since the appointment of Abu Fadak will be confirmed by the Prime Minister, who is open to the influence of the US and Sistani, the attacks are likely related to this issue. This is because Qataib Hezbollah militia blamed Mustafa Kazimi, the head of the Iraqi National Intelligence, who is also likely to be nominated for the post of Prime Minister, for complicity in the killing of Soleimani. Even though, the pro-Iranian political parties in Iraq oppose it, Kazimi is likely to receive the support of the US and Sistani, which is a potential cause of concern for the Iran-backed militia groups and parties. In this respect, the Camp Taji attacks can be considered to be an effort to increase the influence of the pro-Iranian groups in the process of appointing the prime minister, as well as a message to the Iraqi parties and the USA not to insist on the candidate that Iran does not approve.

The visit to Iraq during a government crisis by Ali Shamkhani, the Secretary General of the Iranian National Security Council, is not coincidental. Ali Shamkhani threatened on March 8 that retaliation against the US for the killing of Soleimani would not be limited and Soleimani would be avenged. Shamkhani attracts attention as the first top Iranian official to visit Iraq since the death of Soleimani. In this sense, it is a signal that Iran is openly challenging the US. The fact that the Camp Taji attacks took place immediately after Shamkhani’s visit to Iraq can be considered to be an indicator of this challenge. In addition to that, the main reason for Shamkhani's visit to Iraq was revealed to be the holding of talks to extend the term of office of the government led by Adil Abdulmehdi, who resigned, until the elections that will take place at the end of this year and that he had a meeting on this issue with Kazimi.

However, such a confrontation deepens the security vacuum in Iraq. The authority gap in Iraq is amplified as the Iraqi security forces remain ineffective against militia groups. Iraq becomes even more unstable with the rise of the US-Iranian tensions. Considering the fragmented structure of the Iraqi security institutions and the current authority vacuum, coup rumors are more likely to emerge. Coup rumors have already increased in Iraq in the recent period. In particular there are rumors that the US can instigate a coup in order to limit the influence of Iran. It should also be kept in mind that, there could be a possibility that the militia groups could initiate a counter-coup against any American-instigated coup because the Shiite parties could not agree on the candidate for prime minister and the pro-militia political parties would seek to influence the appointment of the candidate and there is a growing resistance against that. However, any coup attempt in Iraq is likely to result in multiple conflict dynamics. Considering the problems across the country, such as the authority vacuum, the increase in ISIS activities, the economic crisis, the speed of the coronavirus pandemic spreading in the country and the government's inability to curb the spread, and that protests have been going on since October 1, 2019, the emergence of such a conflict can bring Iraq to the brink of disintegration.