Cards are Dealt Anew in Syria 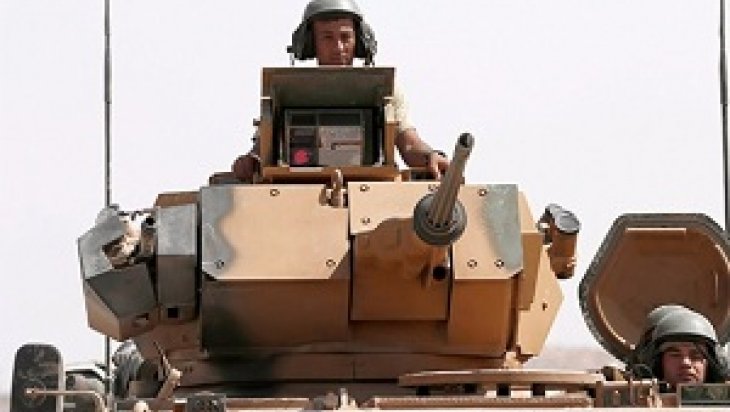 Signals of change were given following the formation of a new government in Turkey. The crisis between Russia and Turkey was overcome, which was one of the first fruits of the initiative summarized as “reducing the number of enemies and increasing that of friends.” While several factors played a role in the rapprochement between Turkey and Russia, one of the most important motivations of both parties was the cooperation in Syria. In the statements made in the meetings between the officials of two states, it was also underlined that “cooperation was ensured against terrorism in Syria.” This process raised the expectation that Turkey’s position which was weakened after the jet crisis in northern Syria will grow stronger again in coordination with Russia.

As a result of this expectation, several Syrian opposition groups supported by Turkish army launched an operation in Jarabulus on 24 August 2016 and took control at the center and in the vicinity of the district within one day. It is expected that this move will critically affect the balances of power, the relations and the areas of control in northern Syria. In this article, answers will be searched to the question: What are the mentioned changes? The timing and goals of the Jarabulus operation, its potential extension and the possibility that Turkey will come face to face with ISIS and YPG will also be discussed.

Turkey has defended the establishment of a safe zone/buffer zone/no-flight zone in northern Syria since the earlier times of the Syrian civil war. However, the purpose of establishment and the extent of geography of the zone changed depending on the shifting characteristics of the Syrian civil war. A safe zone was initially seen as a measure to fight al-Assad regime and to prevent the Syrian influx in Turkey. The purpose of establishment of the region was also considered as a means to fight such organizations as ISIS and PYD/YPG after the mentioned organizations gained power in the vicinity of the border between Syria and Turkey. Lastly, it was agreed to establish “ISIS free zone” between Azaz and Jarabulus which would remove the border between ISIS and Turkey within the framework of the compromise between the US and Turkey in July 2015. Nevertheless, this article could not be put into practice as a result of the jet crisis between Turkey and Russia. This obstacle was removed with the rapprochement between Turkey and Russia and Turkey found the possibility of influence/intervention in northern Syria. Two developments in parallel with this process are that ISIS has increased its terrorist acts in Turkey and its attacks in the border towns and that YPG has found the possibility to seize Manbij and to advance to al-Bab or Jarabulus. While the compromise made between the US and Turkey last year and the rapprochement between Turkey and Russia have paved the way for the operation, ISIS attacks and the possibility of YPG advancing to Turkey’s border in the west of the Euphrates caused the Euphrates Shield operation to be launched more quickly and urgently.

Goals of the operation

It is possible to say that the Euphrates Shield operation has various goals on tactical and strategic levels. The short-term goals can be enumerated as follows: a. removing the border between ISIS and Turkey and eliminating or at least limiting the possibility that ISIS will penetrate into Turkey and set up Turkey’s border towns as target. b. Fighting more effectively the foreign terrorist fighters who come from various countries in the world and try to cross into Syria through Turkey or to return to the country of origin again through Turkey after fighting in Syria. c. Helping the advance of Turkey-backed Syrian opposition which cannot gain permanent success against ISIS and thus assisting the friendly/allied groups to take control in some part of the Turkey-Syria border.

Besides these goals, it may be expected that the Euphrates Shield operation will serve more strategic and long-term purposes. a. Receiving new Syrian refugee influx which may come from northern Syria, especially from Aleppo on Syrian territory, creating the conditions for return of Syrians who have migrated to Turkey due to ISIS invasion. b. Stopping YPG’s advancing to al-Bab or Jarabulus and preventing the de-facto establishment of a region under PKK/PYD control in the entire northern Syria. c. Maintaining Turkey’s geographic connection with Aleppo and Syrian opposition and, in broader sense, with the Arab world in the long term, preventing the restriction on Turkey’s initiatives in the Middle East through terrorist organizations.

Considering these goals, it can be expected that the Euphrates Shield operation will be initially extended along the borderline from Jarabulus to the west. This advance will reach Cobanbey (al Rai) which has recently been seized by the opposition groups under the artillery support of Turkey. Therefore, a region of almost 30 kilometers will be formed under the control of the Syrian opposition and the protection of Turkey along the Azaz-Jarabulus line of around 90 kilometers. However, in its present form, the mentioned region can only serve the tactical purposes of fight against ISIS, security of the border towns and more efficient fight against foreign terrorist fighters. That is why it can be expected that the seemingly open-ended Euphrates Shield operation will be extended to southern regions. It will be difficult to receive the Syrian influx in Syria on such a narrow line and to allow Syrian refugees in Turkey to return to their country. Similarly, PKK/YPG will be able to reach Afrin through Menbic-al-Bab-Mare’ even though it cannot approach Turkey’s border. Therefore, the line which is expected to reach Cobanbey by Syrian opposition should gain depth towards the south. The opposition could primarily advance to the regions under ISIS control in the east of Azaz and Mare’ in order to secure the Azaz-Mare’ line. The natural border of this line will be the north of al-Bab. Al-Bab is one of the settlements where ISIS is the most powerful actor in the region and all forces escaping from Menbic and Jarabulus are gathered here. The organization in a life-and-death struggle will resist here to the end. It is controversial whether the Syrian opposition will be successful in al-Bab even with air support. Victory against ISIS in al-Bab is only possible with the support of the land forces of Turkish army. The risks or feasibility of this is another matter for debate. Syrian opposition will probably and even primarily want to advance to Menbic as well as al-Bab. Therefore, Syrian opposition may be in conflict with YPG before ISIS.

One of the primary goals of the Euphrates Shield operation is to hinder YPG’s efforts to establish a de facto federal region in northern Syria. For this very reason, YPG which has opened a space for itself on the pretext of fight against ISIS has shown the biggest reaction to a military operation against ISIS. Salih Muslim, the leader of PYD which is the political wing of YPG, said that “Turkey would lose a lot in Syria quagmire” after the operation was launched. In response to this, Turkish President Erdogan anonymously stated: “You had better think about your future instead of that of Turkey.” Therefore, it is seen that Turkey is determined to end the presence of YPG in the west of the Euphrates which Turkey previously announced as a red line. Minister of Foreign Affairs Çavuşoğlu has indicated that “they will do what is necessary if the YPG does not withdraw.” This also supports Turkey’s determination. The USA has the critical position at this point. YPG has so far advanced with the US support and developed intimacy with the USA on the basis of fight against ISIS. It is known that Turkey and the USA have problems due to their different views on YPG. However, considering the statements of the US Vice President Joe Biden in his last visit to Turkey, it is understood that YPG will no longer be able to receive support from the USA in the steps it will take in the west of the Euphrates. The USA does not let YPG down. Despite Turkey’s reactions, the USA has tried to support it as much as it has been able to. However, it seems that the parties have reached the border at least for the west of the Euphrates. The USA will continue to act together with YPG in the east of the Euphrates. As it is shown in the conflicts between the regime and YPG in al-Hasakah, the USA has even revealed that it will protect the gains of YPG here not only against ISIS but also the regime. Therefore, the USA gives the message that “YPG is responsible for the steps it will take from now on and it is alone in the west of the Euphrates.” In spite of this, the cooperation may increasingly continue in the east of the Euphrates. The USA will mostly want to focus on al-Raqqah together with YPG.

Turkey will possibly encounter YPG in this case. Turkey will initially expect YPG to leave Menbic and pass to the east of the Euphrates upon pressure. It can be said that the USA has a strong hand in this sense due to the promises that it previously made. YPG has largely been under US influence in the last period and the USA has higher capacity to lead the organization. The USA will demand the withdrawal of YPG fighters that constitute the major force under the roof organization called Syrian Democratic Forces which has seized Menbic.   However, YPG undertakes all political and civil administration of a region and conducts infrastructure works as well as ensuring security when it takes the region under control. The same works have also been carried out in Menbic. Therefore, the withdrawal of some YPG military forces may not be satisfactory for Turkey. Some YPG officials even states that “they will not withdraw from Menbic only because Turkey wants them to do so.” In both cases, Turkey will possibly target YPG. The opposition forces that Turkey supports in Jarabulus will already want to advance to Menbic. Therefore, Turkey-backed Syrian opposition will possibly clash with YPG in case YPG does not literally withdraw from Menbic. Furthermore, it can be said that YPG does not have a chance to advance from Menbic to the west with the Euphrates Shield operation.