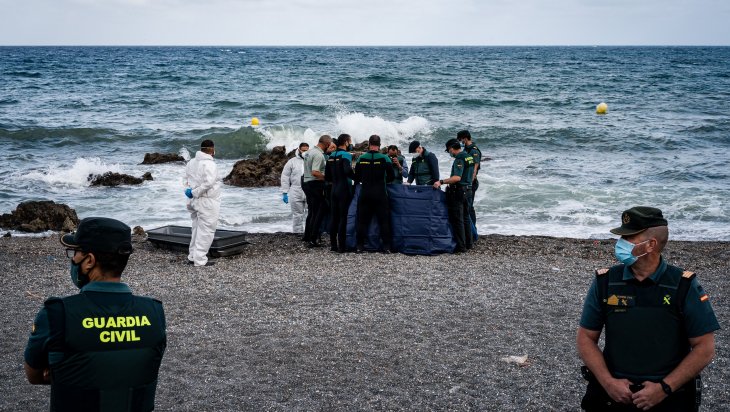 The relations between Madrid and Rabat are heating up, following the last month’s influx of Moroccan and sub-Saharan migrants to the Spanish enclave of Ceuta on the Northern strip of Morocco. Eight thousand migrants entered the seaside border area, thousands of which returned to Moroccan soil after Spain sent troops to the enclave between the two countries.

Recently, Rabat is using the migrants card as a “nuclear” option in retaliation to Madrid, which provided COVID-19 treatment to Mr. Brahim Ghali, Polisario Front’s leader. Thus, this diplomatic episodic event between the two countries looks like a diplomatic provocation that might backfire on Rabat’s national interests in the face of this tragic humanitarian despair, manifested by thousands of Moroccan and non-Moroccan migrants who are seeking a better life elsewhere.

Aid and Protection or Law and Order
Nonetheless, thousands of people of all ages; men, women, young people and children, managed to swim to Ceuta, in the middle of an unprecedented diplomatic crisis between Rabat and Madrid. Oddly, after passively observing the crossing for nearly 24 hours, Moroccan police decided to block the migrants and disperse the crowd, which had flocked to the Mediterranean coast.

Ceuta and Melilla, the two enclaves ruled by Spain for centuries, are the only land borders between Africa and the European Union.

Social injustice has deepened since the start of the COVID-19 pandemic in Morocco. Poverty has increased seven-fold according to data from the High Commission for Plan (HCP). Rabat’s measures of border closure due to COVID-19, which lasted more than fifteen months, have put an end to smuggling of all kinds of imported goods, cigarettes, alcohol, etc. and adversely impacted the whole northern region, leaving thousands of people without regular income.

As a result, several protests took place in Fnideq last winter due to the economic difficulties, despite the promises of the Moroccan government to tackle this thorny socioeconomic issue. However, Ceuta beach crisis turned from a tragic humanitarian issue into another episodic diplomatic tension between Rabat and Madrid. Rabat summoned the Spanish ambassador to convey its exasperation and asked for explanations after the treatment of Polisario’s leader in Spain.

Yet following the Ghali Gate, officials from both countries seem to want a cool-down in the rhetoric damaging the relations. Spanish Foreign Minister Arancha González declared that the influx of migrants to Ceuta was the result of a disagreement with Rabat.

Misleading Crisis
The situation in Ceuta is becoming the Achilles’ heel of the bilateral relations between the two countries, affecting Morocco’s status as a privileged partner of the EU, which did not hesitate to show full support to Spain, while insisting on the normalization of EU-Morocco relations.

Hence, the tragic humanitarian event in Ceuta has unveiled the complex historical relations between Rabat and Madrid, notably under the ruling of the Socialist Workers Party, led by Prime Minister Pedro Sánchez since 2018. Usually, Rabat gets along well with the Republican Party, whose agenda focuses on domestic politics rather than on extra-regional ones — and the right-wing governments are implicitly supportive of the Moroccan thesis regarding the frozen conflict in the Western Sahara dossier.

However, Rabat saw that lately, Spain’s domestic politics has been quite shaky under Prime Minister Sanchez, who is fighting for his political future and for the functioning of his odd national coalition government, which might lead to the loss of confidence vote in the Parliament, and early elections next fall. This would give an opportunity to right parties to regain power.

This helps better understand why Rabat is using the migrants card to put pressure on Sánchez government to back down from its latest timid rapprochement with Algiers, following the announcement of large-scale maritime and gas deals, and to cast light on the future of relation between Algiers and Madrid in the coming months.

How much leverage will Rabat gain from the migrants card? Some analysts have linked this scenario with Ankara’s migrants policy with the EU. This tactic looks suicidal for Rabat because neither the left- nor the right-wing politicians in Madrid would accept this humanitarian blackmail. Even other European countries traumatized by the migrants question such as France, this is a winning political card against the xenophobic RN Party. Morocco and Spain have solid commerce, agriculture and fishing co-operations. With hundreds of thousands of legal Moroccan immigrants generating millions of Euros, Moroccans remain as the largest diaspora of foreign workers in Spain.

Thus, is Rabat able to face the migration issue alone? Because, there are also hundreds of thousands of migrants crossing from Sahel countries via Mauritania, which is another country in water disputes with Rabat. This adds to the long-term national security threats posed by jihadist armed groups, which also constitute an integral part of the EU’s domestic security concerns.

Migrants vs. National Security
The EU will continue to put pressure on Rabat to prevent irregular flow of migrants and migrants crossing from northern Moroccan shores, and to properly and efficiently readmit illegal immigrants on Spanish soil.

Migration is a key element of the EU members’ national security concerns, in particular those of southern EU countries such as Spain, Italy and France, where the migrants question is occupying a large space in domestic politics and political debate. The free circulation of people, goods and services is at the heart of the EU, who adopted a new strategy for the future of Schengen Agreement, in order to ensure security and mobility while also boosting resilience to migration-related challenges in Eastern or Southern Europe.

Rabat’s Spain policy is unlike its relations with any other European country—even with its former occupier France. The relations have always been tense because of the geographical proximity and the historical animosity between the two monarchies that goes back to the 16th century. Despite the cold yet peaceful relations between the two countries in the last century, Rabat is still sensitive to any political rub off on Morocco politics like a real constitutional monarchy, which the Spaniards have had established in the aftermath of the fall of General Franco regime in 1975.

In sum, the year 1975 is not only a political shift in the relations between the two countries, but also a diplomatic issue that Rabat has to deal with in its relations with its neighbors in Maghreb, African Union members, and lately European super-powers like Germany. Moroccan diplomacy has recently appeared active on the Libyan dossier and showed impressive efforts in its relations with western and central African countries, even with Arab monarchies like Jordan and the Emirates on the Western Sahara dossier.

Madrid is, however, assessing the ongoing tensions as a complex process in its relations with Morocco. Madrid won’t let the ambivalence issue of Western Sahara to hurt the two countries’ relations. These rhetorical tensions will end with a detente note, and the two countries might work together to extend their influence to tackle the serious question of migrants, which should remain exclusively as a humanitarian issue and not as a tool of diplomatic pressure.