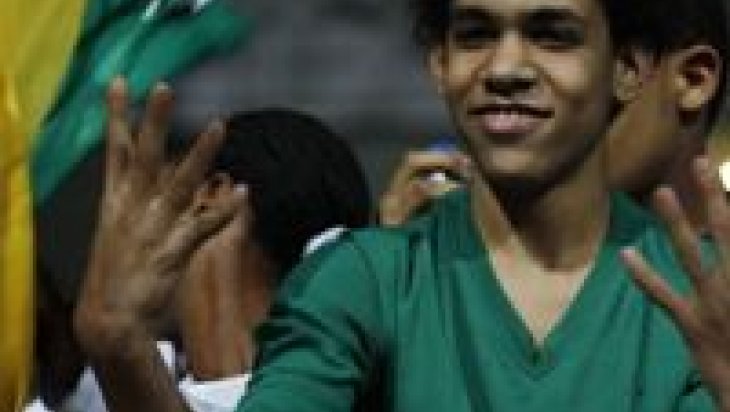 When the popular uprisings that began as December-January protests in Tunisia and spread to many Middle Eastern and North African countries knocked the long-standing authoritarian regimes sideways, the two-fingered “V for Victory” salute became symbolic with anti-government protests and the Arab Spring. But the salute recalls decades of historic moments for countries of the Middle East and North Africa and is one of the most significant collective gestures in the region.

Yasser Arafat popularized this gesture in 1969 to underscore the struggle against Israel. In the 1970s, it became an important symbol among the Lebanese. In that decade, the Iranians raised two fingers against the shah during the Iranian revolution. The gesture manifested itself in Iraq’s first general election since the US invasion and removal of Saddam Hussein, as well as mass protests in 2009 in Iran after the disputed re-election of then-President Mahmoud Ahmadinejad. During the Arab Spring, the two-fingered “V for Victory” salute was flashed by various social and political groups, not only within the countries but also across the Middle East and North Africa. Like a rebel in Benghazi or protester in Tunis, the demonstrator in Tahrir Square displayed this universal salute as a symbol of uprising against repressive regimes.

Over the last three years, the collective gestures of the protests have been localized and have differentiated among the fragmented groups in Egypt. Tensions are running high as protests still continue in the country after the ouster of Egyptian President Mohammed Morsi on July 3, 2013. Polarization, especially between Morsi supporters and the current regime, has become the main characteristic of Egyptian politics since then. Egyptian politics as well as the Egyptians themselves are split and disgruntled over almost every single issue pertaining to the country’s future -- and even on the number of fingers being raised in the air. As these politics reproduce confrontation, each political and social group struggles to create its own collective gesture to differentiate itself from the “political others” in Egypt.

Shortly after Egyptian security forces violently dispersed sit-ins in support of Morsi in August, killing hundreds, protesters began raising four fingers in the air and carrying yellow posters depicting a hand folded into a four-fingered salute to show their solidarity with victims. The new sign, called “Rabaa” (“the fourth” in Arabic) references many things that have significance to Egyptians, such as Rabaa al-Adawiya Square, where the larger of the two August sit-ins that in ended in bloodshed took place, and the fourth president of Egypt, Morsi.

The Rabaa salute has become the symbol of the pro-Morsi protests. As the National Alliance to Support Legitimacy -- formed after the ouster of Morsi by about 40 Islamist parties and groups in order to force the military and new regime to step back from the coup -- searches for ways to achieve its goals by calling together protests and searching for international support, the Rabaa salute has spread on the streets of Egypt, even reaching other countries. It has become commercialized, with people selling items with the salute printed on them -- everything from T-shirts to rings to key chains. It has become one of the most visible and shared pieces of collective “language” of the pro-Morsi masses.

On the other side of things, the current regime and coup supporters lack any significant salute, but there are posters, coffee mugs and clothes bearing the picture of the leading man of July 3, military chief Gen. Abdel-Fattah al-Sisi. For the regime supporters, Sisi has turned into their most prominent symbol, especially as they are likening him to Gamal Abdel Nasser. Since July 3, both Arab and Egyptian nationalism have been on the rise in the country with the help of the regime’s media campaign to contain the Muslim Brotherhood politically and socially. It is working to sustain the legitimacy of the regime’s stance on security, which it adopted after the removal of Morsi. The nostalgia for the Nasser era is in many ways feeding the perception of Sisi as a charismatic leader, but this nostalgia is also frightening political groups that are conditionally supporting the interim government.

Demonstrations on the second anniversary of the 2011 Mohamed Mahmoud Street clashes drew attention to a “third square” movement -- where people were raising three fingers in the air. This new three-fingered salute symbolizes three “nos” -- no to the military, no to the remnants of the old regime and no to the Brotherhood. It is an attractive symbol for the young Egyptians who oppose both the army and the Brotherhood, especially. The harsh security measures adopted after July 3 by the Ministry of Interior and the Egyptian Military have triggered an increase in the activities of the third square movement. However, it is hard to determine whether they have become a significant political and social force in Egypt.

These collective gestures have revealed the divisions that have continued to deepen during this tumultuous political transition in Egypt. How many fingers an Egyptian holds up at a protest -- or even while doing something non-political in a group -- determines his or her affiliation. Moreover, deepening polarization is dragging Egyptians to overproduce various collective gestures and symbols.

After a certain point, communication will become compelling for Egyptians among these diverse “political others.”