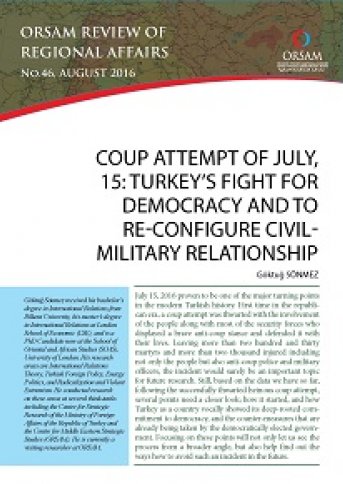 Coup Attempt Of July, 15: Turkey’s Fight For Democracy and To Re-Configure Civil-Military Relationship

July 15, 2016 proven to be one of the major turning points in the modern Turkish history. First time in the republican era, a coup attempt was thwarted with the involvement of the people along with most of the security forces who displayed a brave anti-coup stance and defended it with their lives. Leaving more than two hundred and thirty martyrs and more than two thousand injured including not only the people but also anti-coup police and military officers, the incident would surely be an important topic for future research. Still, based on the data we have so far, following the successfully thwarted heinous coup attempt, several points need a closer look; how it started, and how Turkey as a country vocally showed its deep-rooted commitment to democracy, and the counter-measures that are already being taken by the democratically elected government. Focusing on these points will not only let us see the process from a broader angle, but also help find out the ways how to avoid such an incident in the future.