Covid-19: Should Shift the Maghreb Union Out of Neutral Gear 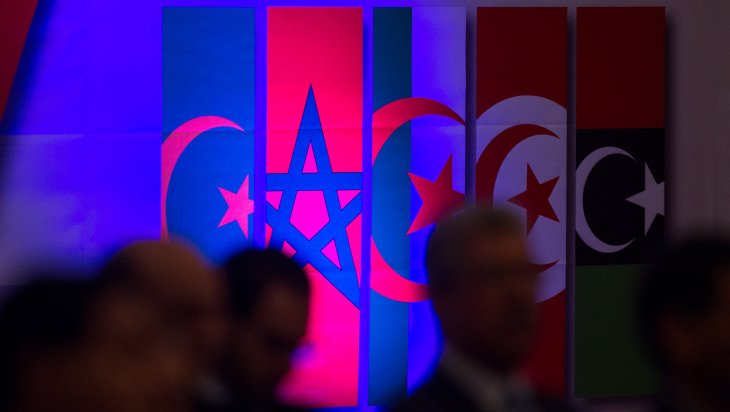 The way the Arab Maghreb Union states manage the public health crisis caused by the Covid-19 pandemic will shape the future of the region and will have socioeconomic and political implications. If the states are able to manage such an unexpected crisis with fewer human losses, they could emerge strengthened from the Covid-19 crisis. This would be only if, however, they do not return to their usual practices when dealing with calamities like natural disaster, seeking blame abroad and indulging in conspiracy theories. If they do, the consequences of the coronavirus will aggravate the fractures and deepen the complex problems that run through the region: instability, incompetence and unaccountability.

This is also an opportunity to change the basis of international cooperation within the sub-regional systems that were hit quite hard by the economic effects of the pandemic and the global recession that is looming. The southern countries in the E.U., for instance, should start thinking about ways to relaunch a new form of Euro-Maghreb cooperation, coinciding with the 26th anniversary of the Marrakech Summit of the Arab Maghreb Union countries, and should imperatively work closely for a peace process in Libya after the pandemic crisis is over.

It is time for the Arab Maghreb Union (AMU), with the support of other regional actors like Turkey, to promote multi-lateral development with regional institutions, i.e., the E.U. Turkey seems to have come out stronger than ever from the pandemic: it has sent medical aid to the five AMU countries. The E.U. has announced that it has granted €450 million to Morocco and €250 million to Tunisia to fight the Coronavirus pandemic. This is a good start, but it will serve little purpose if it is not accompanied by a regional and global effort to enhance the cooperation on both sides of the western Mediterranean.

Because of the drastic collapse of oil and gas prices that the Algerian and Libyan economies depend on, the pandemic has caused a major problem for their public treasuries. Libya is in a five-year civil war that is sucking all the country’s public accounts. There are now 61 confirmed Covid-19 cases in Libya, including three deaths,   and around 750 tests have been performed and 18 people have recovered.

Algeria, after ten-months of peaceful uprisings, (the Hirak), against the Bouteflika system in 2019 and five months after the election of a new president (who is facing his first major domestic public policy crisis with the Covid-19 crisis) Algeria is also experiencing struggles to avoid the risk of infection in a country with a poor health system and infrastructure. After decades of bad governance and corruption, the new administration led by President Tebboune has shown aggressive measures in this regard. These are a sort of a “new deal” based on public health policy and a new medicare system in the country. President Tebboune ordered the creation of a National Public Health Agency, which will help Algerian physicians with better conditions and equipment. Despite the drastic measures, the lockdown and a state of emergency in more than 30 wilayas (provinces), the country leads MENA region of the highest number of Covid-19 deaths with 4,006 cases confirmed, 1779 recovered, and 450 deaths.

Morocco is also facing a significant drop in revenues in 2020. Morocco’s High Commissioner for Planning declared last month that this year would be the worst for the Moroccan economy in two decades. In addition to the fall in tourism, a global recession could significantly reduce the sums of money sent by Moroccan immigrants working abroad, mainly in Europe. This will largely depend on factors that go beyond the government’s control, because of the international micro and macro-economic imperatives involved. This also will affect the government’s agriculture projects and productions that were initiated in 2019.

This comes in addition to visible signs of social discontent already seen in recent years, caused by the lack of opportunities and economic inequalities, together with the chronic question of the absence of a wise and strategic public health policy and poor judgement across the Maghreb region. The country has registered 4,423 cases, 984 recovered, and 170 deaths

In Mauritania, like its neighboring countries, Morocco and Algeria, authorities have taken preventive measures to check the spread of the coronavirus, closing all schools, cafés and restaurants, banning non-essential gatherings such as mosques and public markets, and closing air borders. The question of people’s movements within the country and at its southern borders exposed the disorderly response and poor understanding of this disease, and this is the most vulnerable area to the Covid-19 outbreak.

IOM, with local humanitarian NGOs, nonetheless led the way in raising awareness to better protect these communities in collaboration with the government. This also meant protecting illegal migration, i.e., illegal migrants moving from Mauritania’s northern border with Morocco and Algeria, for example. However, the numbers of stranded migrants in Mauritanian-Moroccan-Algerian and Senegalese borders are likely to increase.

These measures will sustain the protocol accords signed with the European Union, financed by western donors via Trust Fund for Africa through the E.U-IOM Joint Initiative for Migrant Protection and Reintegration. Interestingly, the country has registered the lowest number of Covid-19 cases and deaths in the entire MENA region; Mauritania has registered eight cases, six recovered, and one death.

For Tunisia, the Covid-19 pandemic is a major crisis management test for the new government of premier Elyes al-Fakhfakh and President Kaïs Saïed. The government was formed last February, following the legislative and presidential elections held last fall, and a long “rope pull” political competition. The country, like the other Maghreb countries, is facing serious socioeconomic problems and a healthcare crisis, and is quite concerned about the ongoing civil war in Libya. Tunisia, like Morocco, will suffer a great deal from the drop in foreign income from tourism and trade with Europe. Nevertheless, the Tunisian government, like the Moroccan and the Algerian governments, has launched a national solidarity campaign fund, asking for public donations to meet the expenses the state cannot cover to fight Coronavirus, with 994 confirmed cases, 305 recovered, and 41 deaths.

The impact of the Covid-19 pandemic is being felt severely in the Maghreb communities. The crisis unmasked the state of the entire healthcare system of these countries. They never established this vital sector as one of their governments’ public policy priorities. Also, the deadly virus threat has aggravated the existing socioeconomic problems. In addition, the Maghreb diaspora in Europe is subject to the effects of these changes and challenges, beyond the difficulties involved in implementing large-scale social-control measures, and in the absence of an effective vaccine against Covid-19. The countries of  the Maghreb and across the MENA region, should look at this tragic event as an opportunity to work together and start to think about a Maghreb Healthcare Common Policy Counsel Union, with the participation of Maghreb diaspora experts, establishing a close coordination with their counterparts and colleagues in their origin countries.

It is clear that, the Maghreb countries today should not miss this opportunity to overcome their political divisions, and therefore cooperate in the fight against the spread of the coronavirus in the region. However, the emergency should also serve to reactivate the sub-regional system, the Arab Maghreb Union (AMU), which is now in neutral gear.