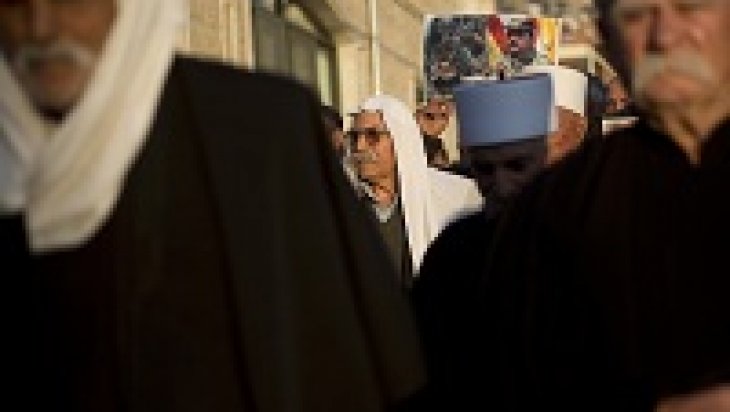 The position of Syrian ethnic/religious minorities has been one of the determining factors over the course of Syrian civil war. Syrian regime has been in a struggle to form an “alliance of minorities” since the beginning of civil uprising. Therefore, it has aimed to divide the country as “the Sunnite and others” and to mobilize all the other groups among themselves and also radicalizing the other camp as much as possible. As a religious minority group in Syria, the Druze is one of the target groups which the regime has tried to win over. The strategy of the regime has been “successful” from certain aspects specific to the Druze. The majority of Druze population in Syria is centered around the As-Suwayda Province on Jordanian border. Anti-regime incidents or opposition movements haven’t taken place here without some exceptions. Despite this, it is possible to say that Syrian Druze adopts a specific attitude differently than the other minority groups in the country such as Arab Alawites and Christians.

With the psychological effect of being a minority group, the Druze tries to remain impartial in the conflict between the regime and the opposition. Syrian Druze has succeeded to escape the conflicts, massacres and civil wars for centuries even in case of security considerations. Therefore, they believe in their natural instincts to survive. Historical memory and agelong struggle to survive have improved the natural reflexes of Syrian Druze in terms of how to act in such situations. The Druze has considerably improved their self-defense mechanism. The position and policies of Syrian Druze in Syrian civil war are the very reflections of this tradition and political culture. A Lebanese Druze gave a stunning example of the mentioned attitude in the history. One of the Druze tribes sent some of its members to Mongolian army and some others to Mameluke army in order to fight in the Battle of Ain Jalut. Therefore, it ensured the security of its tribe independently from who would be the winning of the war.

Syrian Druze indicates that they have never had a chance to place their cards on the table. They believe that it is Kurds who determine the policy and go to any lengths in the Middle East whereas themselves cannot play the game in this way as a small minority group. It can be said that they are generally in harmony with the community which they live in and with the government. As a Druze opinion leader states, “the Druze cannot face up to losing.” Syrian Druze prefers to follow an open door policy which will allow for communication with everyone rather than an alliance of minorities.

For all these reasons, it can be said that the Druze has adopted a specific attitude in Syrian civil war. Although the Druze has largely supported the regime, they have abstained from a direct conflict with the opposition and resorted to communicating and cooperating with them when needed. They perform a cautious approach towards fighting the opposition at the side of the army. Even though the majority of the Druze population supports the regime, they have somehow absolved themselves from literally being a pro-regime group. Syrian Druze religious leaders stated that the Druze would bear arms only to defend their own province, that is As-Suwayda and they also refused to send soldiers to fight for Syrian army in different regions of the country. This approach causes trouble between Syrian Druze and the regime. The Druze encourages their own young population to bear arms and trains them and they receive financial and military support from the regime for this. Over 20 thousand Druze fighters in Syrian army protect their own regions. Furthermore, they don’t allow any external pro-regime power to enter As-Suwayda Province where Syrian Druze lives. While there are a great number of foreign fighters, especially from Hezbollah, in several other regions under regime control, there is no external power in As-Suwayda. This is important in order for the Druze to provide their security independently from the winning of the civil war and to maintain their de facto autonomous positions.

The extension and relatives of Syrian Druze live in Lebanon. Lebanese Druze centered in Chouf District of Lebanon is separated into two groups. Walid Jumblatt, prominent leader of Lebanese Druze and his party have an anti-Assad position in Syria. On the other hand, the Arslan family which is another large Druze family and the political rival of the Jumblatt family has a pro-Assad position.

Syrian Druze has different tendencies even if weak. In this sense, some circles ask the question: “Why do we, the Druze, sacrifice ourselves on behalf of al-Assad and his regime?” An anti-regime Druze leader, Sheikh Wahid al-Balous was killed in As-Suwayda in September 2015. Al-Balous objected to sending Druze youth to serve in the army and demonstrations were organized to demand the resignation of As-Suwayda governor and police commissioner. Although it isn’t known who carried out the attack, it is strongly believed that al-Assad regime launched the attack with the support of powerful Druze within the community. This act of the regime is seen as an effort to harmonize the Druze who thinks of shifting their grounds and making them think over.

Syrian Druze doesn’t have an anti-regime or pro-regime political movement. Syrian Druze are led by the guide/leader of religious functionaries and opinion leaders. It can be said that the people are generally parallel to religious functionaries. Anti-regime Druze leader Sheikh Wahid al-Balous expressed alternative opinions even though they didn’t reflect the mainstream politics. Nevertheless, he was considered as a traitor among some Druze people. Although it is possible that an alternative opinion may come out among Syrian Druze, it is said that this is almost impossible after Balous assasination.

The biggest threat for the Druze is Al-Nusra Front. There is a great extent of Al-Nusra presence in proximity to As-Suwayda Province. It was even possible that the organization might gain ground at the city center of As-Suwayda in mid-2015. Similarly, Al-Nusra Front killed 20 Druze civilians in June 2015 as a result of a disagreement between Al-Nusra front and the Druze in Ain Larooz, a center of Druze population on the borders of Idlib Province. Following these very incidents, Al-Nusra Front imprisoned again a Druze religious leader. Lebanese Druze leader Walid Jumlatt launched an initiative for dialogue with Syrian opposition and Druze Minister of Health of Lebanon, Wael Abou Faour visited Turkey within this scope. The tension between Syrian Druze and the opposition ended thanks to the efforts of Walid Jumblatt and Turkey’s support. Due to all these reasons, the leaders of Druze population try to maintain good relations with Syrian opposition and especially with Al-Nusra Front which is close to Druze regions in order to provide the security of the people. The Druze indicates that they don’t consider Al-Nusra Front, Syrian branch of Al-Qaeda as a terrorist organization. It is believed that ISIS will never accept the Druze but that Al-Nusra Front is different. This doesn’t probably mean that Al-Nusra Front doesn’t threaten them. However, the Druze struggles to survive as mentioned above, which is the justification of this political discourse. Syrian Druze is sometimes obliged to have contradictory positions by considering the balances of power in different regions in order to provide the security of the Druze.

Another factor which will determine the future of Syrian Druze is Israel. 130 thousand Druze live in Israel. This minority has an influential position in Israel’s security bureaucracy. The role that the Druze has in Israeli decision making mechanisms is to build an Israeli shield to protect Syrian Druze. Israeli aircrafts launched an airstrike against Al-Nusra Front after the latter killed a religious functionary in Idlib. There are even several comments which mention that Israel may support a Druze state within its territory in order to establish a buffer zone between Israel and Syria. Nonetheless, Syrian Druze maintains an extremely conservative attitude towards the issues like independent state and autonomous zone. They indicate that they will not resort to this way even in case of Syria’s dissolution and the conditions met since this may lead them to become a target. The Druze already believes that they have an autonomous zone in As-Suwayda. One of the typical characteristics of the Druze is that they conform with the community they live in and are loyal to the political structure they live under.

The last but not the least, concerning the Druze relationship with Turkey and the Druze perception of Turkey, it is not possible to say that the parties don’t have a negative historical heritage which would pose an obstacle in terms of close relations. The Druze indicates that the central authority of the Ottoman Empire settled them in several regions in order to form buffer zones. Tax affairs lied behind certain problems between the Ottoman and the Druze rather than religious issues. In specific case of Syrian civil war, the Druze has contacted the opposition when needed, which brings about the need to hold this channel open through Turkey.

This study was prepared depending on the interviews made with Druze opinion leaders in Syria and Lebanon between the 8-13th December 2015 in Lebanon.