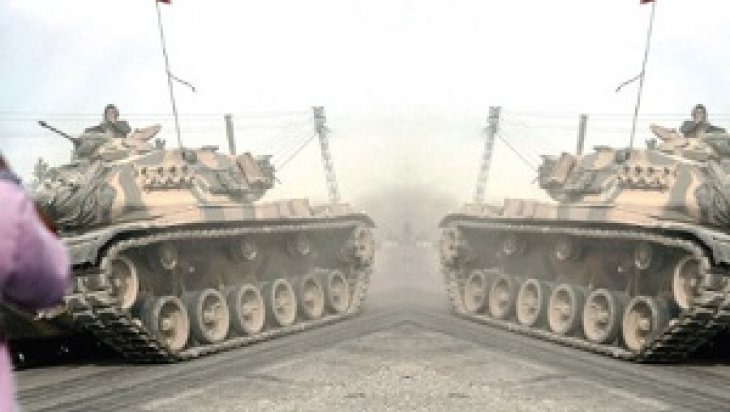 The nature of Syrian civil war changed within the process and the fighting actors diversified, which led Turkey to change its priorities in Syria. Two actors emerged and gained strength in the Syrian civil war, which played an effective role in this change. The first actor was the PYD/YPG; Syrian branch of PKK and the other was DAESH, derivative of Al-Qaeda. Both structures which are accepted as terrorist organizations by Turkey gained influence in the regions close to Turkey and the PYD/YPG and DAESH alleged to have unilateral sovereignty under the name of “canton” and “Islamic State”. This meant that Syrian-based threats diversified for Turkey which considered the Assad regime as the only threat in Syria until then.

Turkey anxiously watched the PKK/YPG and DAESH rising in Syria from the very beginning but two developments caused Turkey to shift its interest from the center of Syria to the north. Firstly, the US-YPG alliance was formed after the developments in Ayn al-Arab (Kobani) and the YPG quickly expanded the territory under its control and took steps to form a federal region which was going to include the entire region of northern Syria. In mid-August 2016, the YPG captured Manbij in the west of the Euphrates with US air support and launched the preparations to advance towards al-Bab, the last big settlement which would provide geographic connection with Afrin. Unless any external factor was involved, the foundations of a pseudo-state under the control of the PKK/YPG were laid in a geographic region far beyond the settlements where a heavy Kurdish population lived, in northern Syria under the US leadership. This meant that Turkey would become neighbors with the PKK and, more significantly, it would be possible for the PKK to do politics as a legitimate actor on regional and international level in the long run. The second development which led Turkey to focus on the northern region was that ISIS also intensified its terrorist acts in Turkey and increased the number of attacks in Turkey’s border towns.

During this period, Turkey started to emphasize more strongly its request for the formation of a safe zone in northern Syria. The goals that Turkey wanted to achieve through a safe zone in Syria were as follows: (It is also possible to interpret these goals as those of the Euphrates Shield operation): 1. Preventing the de facto formation of an autonomous region by connecting the regions under the YPG control in northern Syria. 2. Moving ISIS away from the border region and removing/limiting the possibility that ISIS could take terrorist acts in Turkey and hit the border towns. 3. Welcoming the new refugee influx to Turkey in Syria and preparing the ground for the return of a part of Syrians in Turkey. 4. Guaranteeing Turkey to access the Middle East and the Arab world in the long run. 5. Strengthening its position at the political solution table regarding Syria.

Within the framework of these goals, Turkey launched the Euphrates Shield Operation with the Free Syrian Army (FSA) on 24 July 2016. Turkish army and the FSA initially achieved success more quickly than the general expectation and captured Jarabulus where DAESH gained ground in the short term. Turkey-backed opposition which advanced through Jarabulus in the east and al-Rai (Cobanbey) in the west ended DAESH presence on the borderline in a short time. After this step, two options were before Turkey and the FSA. They were going to advance towards the regions either under the PKK/YPG control or under DAESH control while advancing towards the south in order to deepen the safe zone and remove the threats. It is equally important and may be more important to capture Manbij than al-Bab for Turkey. However, Turkey preferred to head towards the regions under DAESH control, probably thinking that there would be an international consensus that the operation will advance towards al-Bab at the first phase. Since mid-October 2016 when Dabiq was cleared from DAESH, a safe zone has even been de facto formed in a geographic zone of around 30 km depth between Azaz and Jarabulus.

Why does the US feel uncomfortable?

The Euphrates Shield operation gave Turkey the turn to move on Azaz-Jarabulus line. However, the US will play its YPG trump card against DAESH, alleging that "it is now its turn" if the military operations do not succeed in al-Bab and no progress is made. For this very reason, the result of the FSA-DAESH fight in al-Bab will determine the answer to the question what Turkey's position will be in Manbij and al-Raqqah. Again, for the same reason, the USA and the YPG may hope that Turkey will bog down in northern Syria and they may even make such attempts to this end.

Obama administration wants to succeed against DAESH. What the US primarily prefers is to clear DAESH by using YPG and to form an influence area under its full control. However, Turkey's engagement in the field and possible success may oblige the US to adapt itself to this new conjuncture. If Turkey and the Free Syrian Army succeed in the fight against DAESH, Obama administration may want to use this. Except for a wing in the US government, we cannot say that there is an obsessive approach in terms of forming an alliance with the YPG in the fight against DAESH. Turkey's success will strengthen the hands of the circles defending that importance should be attached to the issues that Turkey's sensitive to. The US is probably aware that an alliance with the YPG does not have a strategic meaning for itself. Therefore, the US may lose its chance to resist and thus, may reach the limits of the YPG-US cooperation if Turkey successfully completes the Euphrates Shield operation. In this regard, the most significant developments which will affect the viewpoint of the US are as follows: 1. Turkey's military success in the Euphrates Shield operation and clearing al-Bab from DAESH. 2. Establishment of a civil administration which will take into account the local social structure in the regions cleared from ISIS, successful provision of basic services in the region, maintenance of stability and creation of a generally functioning/stable administration model.

Even though it is possible to change, the dominant view in the US government is that the alliance with the YPG will be maintained and what the YPG will gain will be respected under any circumstances in the east of the Euphrates. Therefore, the institutions which defend alliance with the YPG in the US, notably Pentagon may make moves which will lead the Euphrates Shield operation to nothing. A group of soldiers from the US Special Forces entered al-Rai in mid-September 2016 and retreated after the protests, which is considered as one of the attempts made in this direction. Following this move that the US made, some groups joining the Euphrates Shield operation protested the US presence and withdrawn from the operation and DAESH could reclaim some settlements in the short term. Even though the majority of the groups joining the operation are close to Turkey, Hamza Division, Al-Mu'tasim Brigade and the 13th Division are the groups which are mostly supported by the US and open to its instructions. It is not possible to make them advance towards Manbij and fight the YPG without US permission. Therefore, the US has also the capacity to affect the Euphrates Shield operation from inside. Despite this fact, it is true that Turkey largely takes the initiative especially with its engagement in the field. If Turkey acts determinedly, succeeds in the operations and creates a successful administration model in the regions cleared from DAESH, the US will lose its chance to resist in Manbij and even in al-Raqqah.