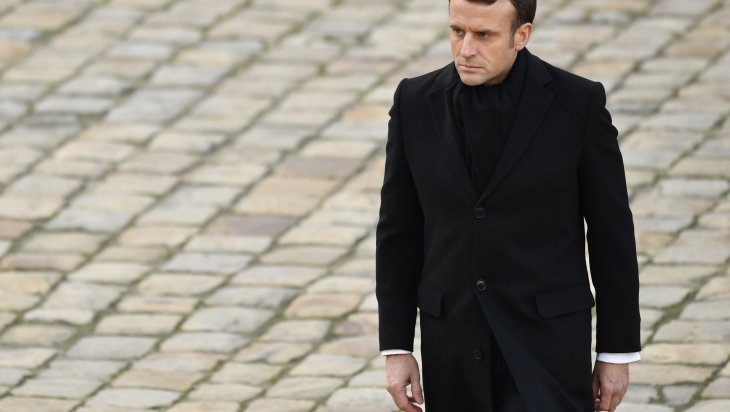 The tension between Turkey and France has become more visible with the comments of the leaders of two countries. During a press conference alongside NATO Chief in Paris on Thursday, President Macron said Ankara had presented its NATO allies with a "fait accompli" by launching a military operation “that endangers the actions of the anti-ISIS coalition." The comments drew a stinging rebuke from President Erdogan during a televised speech on Friday. "These statements are suitable only to people like you who are in a state of brain death," President Erdogan said. "You know how to show off, but you cannot even properly pay for NATO. You are a novice," he added.

President Erdogan repeated an expression President Macron had used to describe NATO to hit back at the French President over his criticism of fellow NATO member Turkey’s operation  against  terrorist group PYD/YPG, the self-rule in northeast Syria an off-shoot of the PKK. "This is not a statement, these are insults," an Élysée official said, adding: "The ambassador will be summoned to the ministry to explain things." The official added that France had "no comment to make on these insults." The French government decided to summon the Turkish envoy in Paris for talks after what it termed "insults" by Turkey's President Erdogan, who accused President Emmanuel Macron of suffering "brain death" the president's office said Friday.

This tough exchange of words between the two leaders has been a result of regional competition between Ankara and Paris. President Macron has been one of the most vocal critics of Ankara's Operation Peace Spring  against the PYD/YPG terrorist  group in Syria. The war of words set the stage for what is likely to be a fractious discussion at the 70th anniversary NATO summit outside London, which will be attended by President Macron and President Erdogan as well as U.S. President Donald Trump.

Last month France’s soccer team played against Turkey as part of Euro 2020 qualifications, a match that was overshadowed by diplomatic and security tensions after Paris condemned Ankara for its military Operation Peace Spring in Syria. The game at the  Stade de France  comes as the operation in northern Syria  exacerbates strains with Europe and prompts large protests by Kurds, including in France. Police planned a reinforced security presence at the game, which was expected to be attended by some 78,000 spectators. The soccer game was classified as high risk by police. Over 1,000 officers were on duty.

French Foreign Affairs Minister Jean-Yves Le Drian had scrapped plans to attend the football game in what was expected to be a tense game as Ankara was pushing its military operation in Syria. "The minister had been due to attend, but he decided not to go," said a source close to Le Drian, without giving further details. Thus, French ultra-conservative politicians from the RN and LR parties called for the game to be called off. "Football should not serve as Turkish President's   propaganda," said Jordan Bardella, the   RN   party European MP, and the party’s “darling” boy of Marineland! "It is unthinkable that the Turkish players do the military salute on our soil or that the Marseillaise be whistled over tonight," he wrote on Twitter, so goes MP Eric Ciotti from the LR party also called for the game to be postponed "for reasons of security given the tensions that exist."

The relations between France and Turkey have gotten sour, knowing sweetness is a distinctive mark of the two countries. Turkish delight is getting moldy, and French chocolate is requiring extra champagne. Since the French Senate had approved the vote of the National Assembly on the bitter Armenian dish, this case goes back to 1915-1916 when the Ottoman army intervened in Armenia, and the act was qualified by the French Congress as genocide.

In the past, anytime Turkey's candidacy to the E.U. gets closer to serious consideration, the rejectionist camp in the E.U. brings up the Armenian case, which without a doubt, successive Turkish governments prefer to leave it to their domestic and sub-regional objective policies. Then-President Sarkozy, who was described by the French media as a “political kamikaze”, had landed this time up against a vigorous Turkish wall.

Today President Macron is playing a new diplomatic game called Tac-O-Tac. President Macron is desperately looking for a resurrection after his domestic politics troubles created bywith “the Yellow Vest” on one hand and more students and workers organizations planning to join the planned strike on Dec, 5. The movement's major grievance is against pension reform. So he is like former President Sarkozy, who sought to seduce the Armenian vote. The French Armenians are divided between the  provinçiaux   blue color whose vote is divided between the so-called lefty parties and Parisian bourgeois elite who are in his camp anyway.

The debate on the Armenian issue inspired by political considerations, hence the historical-legal tension goes back to the Gayssot Law that incriminates any individual who denies the reality of a crime against humanity. However, if the application of the Gayssot Law is applied to the Ottoman army's acts in Armenia, its spirit is also true regarding the French Fourth and Fifth Republics’ atrocities in Algeria, its mass killings in Algeria, and the infamous May 8, 1945.

Hundreds of Algerians were massacred by the French forces in Sétif, Guelma, and Kherata, a punch-line then-Premeir Erdogan used in his response to the French Senate vote. Nonetheless, if the Gayssot Law has a dissuasive effect to avoid any future human disregard, whether an ethnic cleansing or extermination of a religious group, it is a morally high and legal tool to stop any tyrant daring to order such a cowardly act.

Subsequently, in 2009 Ankara and Yerevan, in an effort to begin a new chapter, opened channels of engagement and diplomatic rapprochement referred to as "soccer diplomacy." They know their countries' political values and cultural variations, and they are eager to work out their differences and demonstrate their readiness for a constructive dialogue.

What does France stand to gain or to achieve? Legally, it is hypocritical. France is still chased by its own heavy-load colonial crimes. Politically, it is poor judgement. France needs Ankara for the entire MENA turmoils, from the Iranian dossier to the Syrian impasse, and recently to the Lebanon political crisistothemigrants/refugees; Ankara has been doing a great job serving as a robust  gendarme  and protecting the E.U countries of influx migrants.

At the sub-regional level, in France's courtyard in the Maghreb and the Sahel, its national interests and security are in jeopardy. The French should look at Ankara with tender eyes for help in Libya. Paris’   surreal-politik   policy in Libya, like in Syria, has put Paris in an alarmed panic. Ankara could play a major role with the tribal Muslim leaders in the   Sahelean   countries and also to the West of Africa in their fight against Boko Haram, which is menacing the stability of the large, populated African country of Nigeria and its neighbors in the North.

Economically, it is a  frustrating situation for Paris if the country sticks with the narrative of sourness. History has never been a good source of governing for politicians because its myths bite them and make them look foolish.Alliances work better with a mind to restrain conflict, and maintain NATO members' balance and entente over leaders' mésentente.