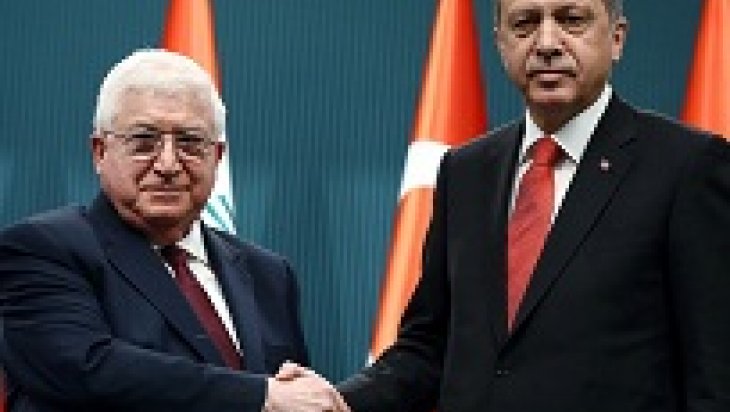 President of Iraq, Fuad Masum visited Turkey on 23-24th April 2015. Although Fuad Masum was in Turkey for the Memorials of the 100th Anniversary of the Victory of Çanakkale, the visit occurred at a very critical time both given the period Iraq and the Middle East is going through and in terms of Turkey-Iraq relations. In fact, Feryad Revanduzi, Iraqi Culture Minister, Muhammed Gabban, Iraqi Internal Affairs Minister and Falah Feyyad, Iraqi National Security Advisor were in the delegation of Fuad Masum. Fuad Masum and the delegation accompanying him held a series of meetings with their Turkish counterparts. Fuad Masum especially met with President Recep Tayyip Erdoğan and also Prime Minister Ahmet Davutoğlu and President of the Turkish Grand National Assembly Cemil Çiçek. Likewise, despite the small minority of Armenians in Iraq, Fuad Masum’s diplomatic visit to Turkey for the activities organized on 24th April is a notion showing that Iraq is taking into account Turkey’s sensitivities.

It is seen from the Iraqi delegation’s visit to Turkey that generally issues on security and especially potential fields of collaboration in the fight against ISIS, stood out. At this point, the statements issued after the meeting of Iraqi President Fuad Masum with President Recep Tayyip Erdoğan is noteworthy. Especially the fight against ISIS and also the priorities of Turkey towards Iraq has been once again clearly stated. Looking from Turkey’s point of view;

- That Iraq’s unity, solidarity and integrity is supported,

- That Turkey treats all groups in Iraq equally,

- That ISIS is a terrorist organization, which has turned into a global threat and Turkey will continue to give its support to the fight against ISIS,

- That it is needed to form an extensive strategy on both national and international levels against ISIS,

- That it is important to support local forces and use them against the fight with ISIS,

- That humanitarian aid by Turkey will continue,

- That it should not be allowed to let the Muslim Ummah to break apart,

- The urgency to solve the Syria crisis,

- That enhancing the relations between the two countries and developing the volume of trade is emphasized and as such Turkey’s position is clearly demonstrated.

At this point, when the priorities of Turkey towards Iraq are elaborated, it can be seen that it harbours the points which will aid the solution of the problems in Iraq.

Iraq’s unity, solidarity and integrity and Turkey’s approach: In every period the main emphasis of Turkey concerning its priorities for Iraq has been on Iraq’s political unity and integrity. Turkey accordingly has taken steps to enhance better relations with every group in Iraq and has given its all to include all groups in Iraq into the political process. Although from time to time this situation has been misinterpreted by the Iraqis and regional countries, Turkey’s rightfulness has been further demonstrated in the aftermath of the ISIS advance. The exclusion of the Sunnis from the political process and the Sunnis trying to solve their problems with the Iraqi central government through different non-political methods has created a political and security gap. ISIS has been the power who filled this gap. Thus Turkey still emphasises that ISIS cannot only be fought by military methods but also efforts should be made to integrate the Sunnis to the political process. Similarly Turkey, in its relations with the Iraqi Kurdish Regional Government (IKRG) has been in accordance with the Iraq’s integrity and political unity. In the 2008-2009 period when the IKRG increased its independence rhetoric Turkey’s developing relations with the IKRG kept the Kurds in central politics, pressured the Kurds to take part in the government formation process, after the general elections in 2010 and 2014. It is believed that, Turkey developing good relations with the new Iraqi government formed by Haider Al-Abadi in the post ISIS period, has affected the softening of the relationship between Arbil and Baghdad. In addition to this, Turkey has shown that it clearly favours the stability of Iraq by forming good relations with the Iraqi government headed by Haider Al-Abadi and was the first to country to congratulate the Iraqi government. By softening its policy towards Turkey, the Iraqi government helped the rapid development in relations between the two countries. In the coming period, it is possible to say that steps will be taken to support Iraq’s political unity and integrity and the cooperation between Turkey and Iraq will develop.

The fight against ISIS: Turkey, since June 2014 when ISIS captured areas in Iraq’s soil, has clearly exhibited its stance against ISIS. Even before, in the year 2013, Turkey listed ISIS as an official terrorist organization and proved that ISIS is a threat for Turkey.  However, due to a negative campaign issued by the international press against Turkey and after the news that some members of ISIS has moved on to Syria through Turkey's borders has left Turkey under suspicion. Although, as seen from the attacks in Mosul Consulate, Niğde, Basil and İstanbul, Turkey is under direct ISIS threat and a target and so has continued the fight against ISIS with determination. Since the beginning of the ISIS advance, approximately 13,600 people, who were either trying to enter Turkey or who were found to be associated with ISIS were banned from entering the country and about 1330 people were arrested while crossing from Turkey to Syria. However, it is clear that Turkey’s efforts alone will not be enough, especially for the cessation of money, weapons and human resources of ISIS.  For this reason, Turkey has pointed out that an extensive strategy both on a national and international level is required. Furthermore, Turkey has taken initiative to maintain the political equilibrium in Iraq and continuing its effective position over the Sunnis in order to reintegrate the Sunnis to the political system. At this point, it is emphasized that attention should be paid to the local balance of power in Iraq. Especially, in a possible Mosul operation, it will be important to use local forces in order to maintain national balance in Iraq.

Aid given by Turkey to Iraq: In this period Turkey has expressed clearly that it is ready to help Iraq in every way that is possible in order to eliminate ISIS. Thus, the Iraqi Internal Affairs Minister Muhammed Gabban and Iraqi National Security Advisor Falah Feyyad, who were with the delegation accompanying Fuad Masum, during their meetings with the Turkish authorities have stated that they reached an understanding especially on training of Iraqi security forces. On the other hand, it is known that improvements on strengthening the sharing of intelligence between Turkey and Iraq are also in progress. Apart from this, Turkey may be the country that has taken the most important role in the human crisis in Iraq. Turkey up until now has sent more than 800 trucks of humanitarian aid to Iraq. At the same time, Turkey is trying to help the sheltering problem of the Syrians and Iraqis, who have fled from the ISIS terror, with the tent cities constructed both at the north of Iraq in Arbil and Duhok and also at Kirkuk. Moreover, there are over 300 thousand Iraqi refugees in Turkey and Turkey meets their needs almost without any international aid. Herein, in terms of ameliorating the conditions of both the refugees in Turkey and the fugitives in Iraq, Turkey is in the pioneer country position. Here, as well as the current situation, in the aftermath of ISIS for those who have been displaced to return to their place again and in such a case to take steps in terms of the elimination of losses from those damaged places will be important. At this point, while Turkey will continue its humanitarian aid, the necessity for developing international coordination and cooperation is apparent.  It is expected of Turkey to take initiative in this respect.

The economy and trade factor in Turkey- Iraq relations: The most important aspect of Turkey-Iraq relations is the economical relations. Iraq, being the Turkey’s second biggest trade partner, has a trade volume of 11.1 million dollars in favour of Turkey. This volume of trade that went up to 13 billion dollars in the past years has been negatively affected by the ISIS terror. In addition to the volume of trade between Turkey and Iraq, Turkey has an important role for the restructuring and construction of Iraq. As of the current situation around 1,800 Turkish companies are operating and investing in Iraq. While it is aimed to increase the volume of trade between the two countries up to 16 billion dollars by the year 2015, Iraq’s instability in terms of security and politics, is standing in the way of fulfilling the economic potential within the Turkey-Iraq relations. Nevertheless, in the aftermath of ISIS, it is expected both for the investments of Turkey in Iraq and for the economical activities especially in the field of energy between the two countries to rise.

Syrian crisis and the regional equation: With regard to the Turkey-Iraq relations, another factor that is effective is seen as that of Syrian crisis and the developments in the Middle East. Especially ending the crisis with Syria and the fight against ISIS are highly important for Iraq’s stability. At this point, the unconditional support given to Bashar Al-Assad during the tenure of Nouri Al-Maliki and Shiite militia groups aiding Bashar Al-Assad has complicated the solution in Syria. Moreover, Iran’s role both in Iraq and in Syria has brought the equation to an even more complicated point. Especially during the fight against ISIS, Iran’s increasing influence over the militia groups called “Voluntary Forces”, which are actually called Hashti Shaabi (Popular Crowd) and in which are the Shiite militia that formed after the fatwa of Ayetullah Ali El Sistani and the fact that Iranian generals and military officials play a direct part in the process in Iraq, seems to affect Iraq’s political unity and stability in a negative way. In the same way it is possible to say that Iran having an attitude to deepen the crisis in Syria and Yemen is having a fuelling affect on the negative dynamics ISIS created. In fact, Iran’s change in attitude towards a more moderate policy in Yemen, signalling a cooperation to solve the problem and start a political dialog period with Saudi Arabia who engaged in military operations in Yemen, is seen as significant for preventing the deepening of the rift in the region. Thus, concerning the steps of regional cooperation and reconciliation to be taken to prevent the deepening moves of ethnic, religious and denominational separation of ISIS in the region, it is important for Turkey and Iraq to make joint efforts.