Future of Syria Crisis after Aleppo 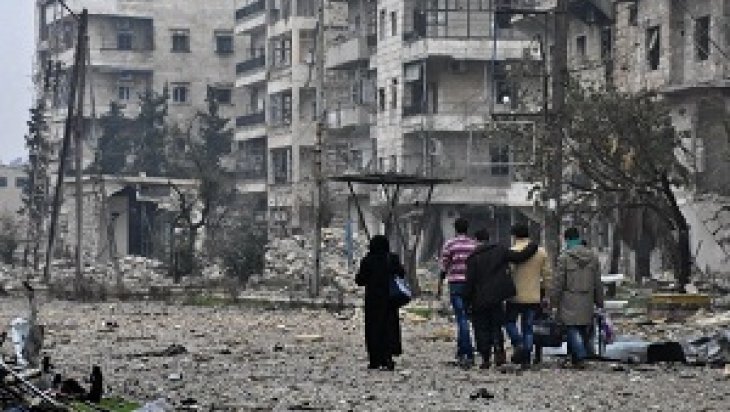 Since 2014, Syrian regime has resorted to a method with Iran which can be summarized as besieging the settlements in order to reclaim the opposition-held regions and forcing the opposition and civilians to surrender by leading to a humanitarian crisis. In this sense, the most striking example was Homs; this province which was the center of the resistance in the earlier times of the uprising was taken under controlby the regime in 2014. Attempts were made to implement this tactics, pursued in coordination with Iran as of mid-2014, also in Aleppo. Even though the regime made particular progress in order to besiege Aleppo, it was understood in mid-2015 that this would not be possible. In parallel with further prolongation of the civil war, Syrian army weakened and started to have difficulties in recruiting soldiers to fight in the army, as Syrian leader Bashar al-Assad stated. Following this statement, some developments took place in a way that would critically change the power distribution in the Syrian civil war.

Iran, which benefitted from the weakness of Iraqi army in the face of DAESH was ready to control the Iraqi field through the Shiite militia which Iran trained, financed, armed, mobilized with high religious motivation and organized under the name of al-Hashd al-Shaabi. It was understood that the Syrian regime would not be able to resist for a long time against the opposition, which opened doors for Iran as in Iraq. Firstly, the foreign Shiite militia that appeared in the Syrian field in mid-2012 started to enter the field more intensely in order to meet the needs of the Syrian army for land forces as of mid-2015. The fighters who were brought from several countries, notably Lebanon, Iraq, Afghanistan, Pakistan and Yemen upon Iran’s organization further allowed Iran to take Syria under its influence/control. Another development which changed the power distribution in the civil war was Russia’s direct intervention in this war in September 2015. Paradoxically, this alliance changed the military balance in favor of the regime but also caused the regime to lose power from within and to surrender control to the external powers on the other hand. The practical consequence of this was primarily the military advance of the regime. Secondly, the regime was divided into fractions represented by the external interests and moved away from a controllable actor.

Aleppo was completely besieged in July 2016 upon YPG components' joining the alliance of the regime, Russia and Iran at the city center of Aleppo. The opposition could not succeed even though they took initiatives to break the siege through the southwestern wing and the opposition under oppression in the city started to withdraw gradually. The regime firstly divided the opposition-held regions stuck in East Aleppo into two areas and then trapped them on a small islet by seizing control in the northern part. Russia, Iran and the regime which were relieved since the international community remained silent tried to create a serious humanitarian crisis and seize full control in the city. As of this very moment, assumedly existing but invisible disagreements started to arise among the forces which acted together with the regime. While Russia defended that the civilians and armed groups in East Aleppo should be evacuated safely, the regime and Iran did not allow any actors to leave the city. Disagreements among the sides reached such a point that Russia even firmly indicated that “it would hit the regime and Iranian militia if the ceasefire was breached.”

As the opposition loses power, it is seen that a competition appears between Russia and Iran which conduct a common fight in order to prevent the collapse of the regime, on the basis of who will be influential to what extent in Syria’s future. As for Russia, it is more important to maintain its current gains rather than sustaining the Syrian civil war for a longer time. Russia thinks that it has gradually started to reach its favored borders and its top priority is to maintain its military presence in Tartus and Latakia. It focuses its efforts on keeping al-Assad on his feet since it believes that only the regime can protect these interests. Apart from this, it wants to settle accounts in Idlib with Caucasian fighters and radical movements which, it believes, threaten its internal security. The last scene of the war could be Idlib for Russia which thinks that it has achieved the first two purposes. However, Russia considers that it should sit at the table in a strong position and political solutions should be found rather than reflecting upon the lost regions in the north and east of Syria and further prolonging the war.

On the other hand, Iran has not yet reached its goals in Syria. As for Iran, the most important purpose is to form a safe corridor cleared from the social groups which it considers as a threat, in the geography from the Iran-Iraq border to Lebanon. From this viewpoint, Mosul and Aleppo operations are the steps taken to reach the same goal for Iran. The sine qua non of this goal is to lead to demographic change in the field. As in the example of Iraq, Iran wants to seize control in Syria through the militia. A Syria which is radical, highly motivated in religious terms and under the control of uncontrolled groups does not overlap the final picture of Syria that Russia wants to see. Finally, Iran acts with its ideology and identity motives while Russia is only focused on the protection of its concrete interests. This causes differences in the tactics to be implemented in order to set the goals and priorities and reach these goals.

Russia will be disturbed to see that the Syrian field will be lost to Iran in a conjuncture where its own military role is such determinant. It is possible that Russia will force the regime to make some concessions and compromise with the moderate opposition. Iran, in its part, may be anticipated to give inspiration for sustaining the war until the corridor is formed on Iraqi border. The regime which has reclaimed Aleppo will be more ambitious and will now firmly believe that it can end the civil war through military means. This will lead the regime closer to Iran's position and the ties between the regime and Russia may be strained. This does not mean that the alliance between Russia and the regime will collapse. Russia will continue to think that its interests can only be protected by the regime on any condition.

As the natural consequence of this development, the ties between Turkey and Russia which have already thawed in terms of Syria may increasingly continue thawing. The first signs for this were seen in the process of evacuation of East Aleppo. In an environment where the international community remains silent, Turkey which assumes a role in the safe evacuation of East Aleppo has continued its efforts on ceasefire with Russia. However, these efforts have been ruined several times with the moves of Iranian militia and the regime in the field.

What is anticipated in the Syrian civil war from now on?

Contrary to popular belief, the regime seizing control in Aleppo does not mean that the civil war is coming to an end. Different threats are present for different actors. Efforts were made to legitimize the massacres in Aleppo with the presence of Fateh al-Sham Front (previously called al-Nusra Front). Nevertheless, al-Nusra was maybe one of the weakest groups in East Aleppo. Al-Nusra is essentially powerful in Idlib and some groups are now going to withdraw towards Idlib. The massacre of civilians in Aleppo strengthened the hand of al-Nusra. The people in Idlib will now consider that they have to fight as the last resort and may be inclined towards more radical groups. This was the very consequence that the regime wanted to reach. In conclusion, the image of “radicals against legitimate Syrian government” will be created more easily. The fight in Idlib is of utter importance for Russia and China, as well. A number of people from North Caucasus and China fight here against the regime in different groups. Both countries want to settle accounts with these components in the Syrian field and to eliminate them before turning to their own territory if possible. Therefore, Idlib could be the next close combat field in the Syrian war. However, what makes Idlib problematic for the regime is that it cannot follow its siege strategy that it has implemented so far because Idlib can be open to the world through Turkey.

From Turkey’s viewpoint, the external radical factors settling in and around Aleppo, which is in Turkey’s field of close interest, raise concerns. Furthermore, it does not seem possible that Turkey will be convinced to reach a conclusion without finding a solution which may satisfy Turkey in terms of YPG/PKK question in northern Syria and across the de facto borders. Even though the common problem of the world, DAESH is inclined to losing power, it still keeps considerable amount of regions under control and Raqqa, “its capital” where it is the most strongest, is still in its hand. Raqqa operation which was launched under the leadership of the USA and YPG/PKK in order to clear Raqqa from DAESH appears to aim at creating a buffer zone between Raqqa and the Euphrates Shield rather than clearing the organization away. YPG/PKK advanced from the north to the south in the region right in the east of the Euphrates with this operation. Therefore, it seems that efforts are made to hinder Turkey’s further advance to the east if al-Bab is cleared from DAESH. The regime which feels that it has gained extra power after Aleppo may increasingly object to YPG/PKK federalism. The two actors that do not object to YPG for tactical reasons for the time being and continue their alliance in certain regions may come face to face in the following stages. Besides all this, Syrian opposition continues to control limited amount of scattered regions even though it seems trapped in Idlib. The regime will have to fight the opposition in the rural areas of Damascus, Hama, Homs and Daraa. The regime may reclaim some regions with the support of the militia and Russian air support but the following problem will be how these regions will be kept in hand and how security will be ensured in the larger areas. To conclude, it could be an optimistic presumption to say that the Syrian civil war is coming to an end.