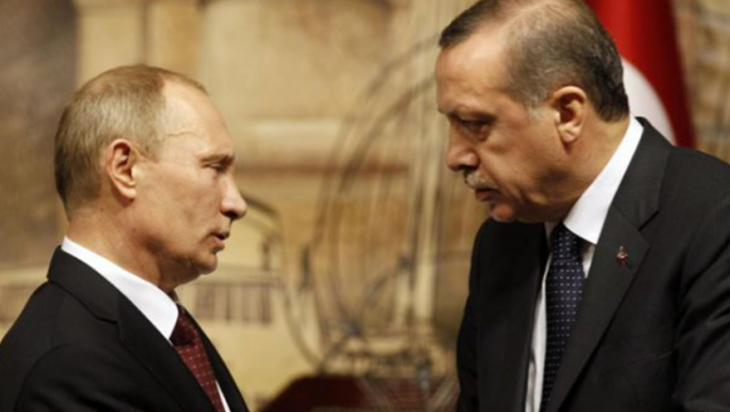 Idlib has become the new military target of the Syrian regime forces backed by Russia and Iran that have succeeded in taking the Iraqi border under control. Abu al-Duhur Airbase is at the center of the operations launched by the regime which has shifted the elite military forces completing the operations in Deir ez-Zor to Idlib.

As a consequence of the operations initiated in the north of Hama, the regime forces have started to advance swiftly towards Aleppo. The Aleppo-Hama route will be probably taken under control by the regime forces in a short while and it will become the new borderline between the opposition and the regime forces in Idlib. The opposition-held region which is in the east of this route and will be fully besieged may also be taken under regime control soon. Therefore, the Syrian opposition will be stuck in a narrower zone in the west of the Aleppo-Hama route.  Within this process, Russia has also intensified its airstrikes, setting civilian targets, especially the hospitals in the borders of the de-escalation zone in Idlib.

In parallel with these developments in Idlib, there were certain attacks targeting Russian military presence in Syria. First, the opposition fired Grad missiles on the Khmeimim Airbase in Latakia on 31 December. It was stated that Russian aircraft was damaged and two Russian soldiers lost their life as a result of this attack. In the aftermath, it was announced that an attempt was made with 13 armed unmanned aerial vehicles to launch an airstrike on Russian military bases in Khmeimim and Tartus on the night of 6 January.

All these developments are linked to the Idlib operation launched in coordination of Russia, Iran and regime forces. Syrian opposition groups try to show Russia how much it would cost for it to insist on the Idlib operation. It has also been recently seen that Turkey adopts a harsh discourse regarding the al-Assad regime and its Astana allies Russia and Iran.  Following the statement of President Erdoğan calling al-Assad “terrorist”, Minister of Foreign Affairs Mevlüt Çavuşoğlu also criticized the Idlib operation, indicating that “the regime hit the moderate opposition groups on the pretext of al-Nusra presence and this attitude undermined the political solution process”.

Russian Foreign Minister Lavrov announced a short time ago that DAESH was defeated in Syria and al-Nusra would be Russia’s new target in 2018. Turkey shares the same opinion as Russia on the elimination of radical elements in Syria. Therefore, the essence of Russia’s mentioned statement does not pose any problem for Turkey. However, Turkey attaches vital importance to how this fight will be conducted. If Russia imposes a full punishment in Idlib without discriminating between civilians and armed groups or moderate and radical groups, as seen in the previous military operations of Russia, a chaotic athmosphere which will emerge will directly spread to Turkey. Therefore, Turkey defends that a different policy should be followed in the fight against radical groups in Idlib, where there are three million civilians and tens of thousands of moderate FSA fighters that also take part in the Astana process. This policy is based on the discrimination between radical and moderate groups through some non-military means in the longer term and the fight against radical groups afterwards.

However, the condition for putting this policy into practice is ensuring definite stability in Idlib. Russian airstrikes targeting civilian areas and expansion of its military operations towards the opposition-held regions, exceeding the borders set in the de-escalation zone deal of Iranian-Syrian forces makes it impossible for Turkey to implement its Idlib policy. This situation causes the Astana and Sochi process to become increasingly more fragile. As the number of attacks targeting civilians increases in Idlib, it becomes more difficult to distinguish between moderate opposition and radical groups and all the opposition groups become closer to each other. Besides, it becomes less possible for Turkey to convince the moderate opposition to come to table in an environment where the airstrikes have not yet been ceased.

Another reason for the recently witnessed harsh attitudes of both sides is that Turkey’s expectations are not met in Afrin. Turkey’s top priority in Syria is the fight against YPG/PKK and it is in search of allies that will strengthen its hand. This is also the basis of its cooperation with Russia in Syria. While Turkey undertakes a role in ensuring the respect of the opposition groups to ceasefire and their integration in the political process, it expects to see a green light from Russia in Afrin. However, Russia still maintains its protective approach concerning Afrin and YPG, which is disturbing for Turkey.

Turkey has probably reached the limit of what it can take from Russia in the fight against PYD/YPG. Russia’s attitude has never been as supportive as the USA and the West when it comes to PYD/YPG. Russia has mostly considered PYD/YPG as a leverage against Turkey. Russia has acted carefully to keep its close contact with PYD/YPG at a level that would not sabotage its relations with the countries in the region. Therefore, Russia has taken up a protective position for YPG, rather than supporting it. This has also reached a supportive dimension in cases where Russia has had crisis in its relations with Turkey or has wished to change the position of the latter. Permitting Kurdish actors including PYD members to hold a conference in Moscow, allowing PYD to open an office in Moscow and PYD’s demand for invitation to Sochi can be counted among these examples.

Although Russia’s attitude towards PYD/YPG has never been satisfying for Turkey, it has been seen as a preferable ally when compared with the USA. Furthermore, Turkey has held negotiations with Russia, unlike the USA, and has believed that it can benefit from certain confessions about YPG. The Euphrates Shield operation is an example of this. However, Turkey makes efforts now to provide the conditions under which it can directly target YPG and Afrin stands out in this sense. Nevertheless, Russia ensures a protection shield around YPG in Afrin, which disturbs Turkey further. Russia indicates how vital it is for itself to cooperate with Turkey in Syria. Despite this, Russia attaches little, even no importance to Turkey’s vital problem, which leads to increasing tensions. The reciprocal display of force in Idlib should also be taken into consideration within this context.

It is seen that the difference of views between Russia and Iran increasingly arise in terms of Syria’s future. Iran has different views than Russia on matters like YPG regions in Syria and federalism in Syria. This may lead Turkey and Iran to have closer positions in Syria, at least concerning YPG and federalism, in the following period. Completely different Syria visions of both countries may not pose an obstacle in this regard. Turkey and Iran also supports different local actors in Iraq but they have succeeded in cooperating for the protection of Iraqi territorial integrity and reducing the role of external forces in Iraq following the independence referendum of the Kurdish Regional Government. The process including Baghdad has led to the change of balances of power and of the de facto borders of the country in a short time. The increase in the influence of Iranian-backed militia even in the regions of Turkey’s close interest is not probably welcomed by Turkish decision makers. However, the mentioned cooperation has strengthened the hand of Turkey in the fight against PKK in Iraq. In this process, it has also been witnessed that Turkey has partially changed its perception of Iranian-backed al-Hashd al-Shaabi (Shiite militia). A similar case may also be seen in Syria.

One of the factors that will determine the future of Turkey-Iran cooperation, as in Iraq, will be the Middle East policy that the USA is likely to follow in the post-DAESH period. Trump administration will focus on the containment of Iran in the region in the new period. The manifestations triggered by the internal dynamics in Iran may guide the USA in determining the path to be followed. In an environment where it is very difficult to choose options such as military intervention and proxy wars in order to contain Iran, the USA may want to deepen the cracks in Iran through economic sanctions. Seeing the approach of the US pressure, Iran would wish to keep Turkey on its side. On the other hand, Turkey-US relations still go through the worst times in the history. For the known reasons, the relations are likely to deteriorate further in 2018. Therefore, as seen in the manifestations in Iran, the USA and Turkey will have opposing positions in terms of the destabilization of Iran. Turkey will not take part in the US policy to contain Iran not only because it has problematic relations with the USA but also that Iran would perceive its destabilization as a regional project targeting itself, that PKK might gain new positions and that Turkey’s economic interests would be at stake. This might help Turkey and Iran to shift their cooperation starting in Iraq to Syria.

Despite all these supportive factors, it can be said that the mentioned process will not be as easy as in Iraq. There are two important reasons for this. Firstly, Turkey-Iraq relations have never been severed despite several problems and both sides can find a common ground easily. This seems possible at least in the middle term in Syria. Secondly, Iran insists on a military solution in Syria together with Damascus. Iran’s aggressive policy in Idlib which is vital for Turkey will make it more difficult for the parties to cooperate. However, the recent developments in Idlib show that it is extremely difficult to ensure permanent stability in an environment where no one feels safe.