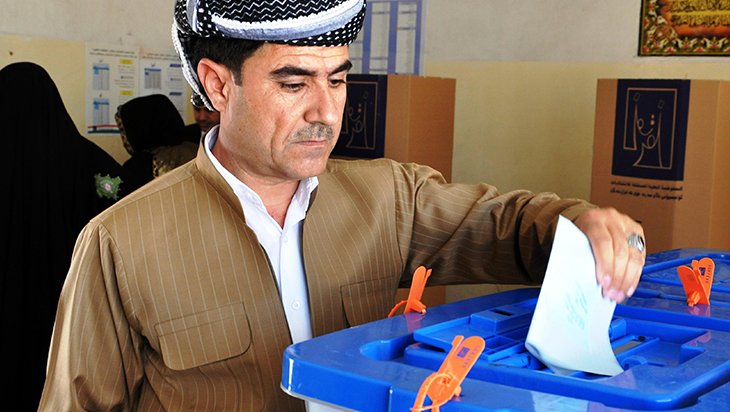 The main Iraqi Kurdish parties remain on opposing sides in the continuing political battle over the shape of Iraq’s next government. The principal dividing line is between the Kurdistan Democratic Party (KDP) and the Patriotic Union of Kurdistan (PUK), whose rivalry in Baghdad is an extension of their long-standing disputes in Iraqi Kurdistan. This rift is now threatening to engulf the semi-autonomous region in a major political crisis.

The Kurdistan Region of Iraq (KRI) is bracing to hold elections for its 111-member parliament on Oct. 1. The polls will be the sixth for the legislature since it was established in 1992. The KDP currently holds a 45-seat plurality in the body and has ambitions to expand its power both in Baghdad and Erbil.

However, against this backdrop, the PUK and other smaller Kurdish political parties contend that the current electoral law in the KRI prevents fair representation in the regional parliament. They seek far-reaching reforms before the upcoming elections, spurring doubts about whether the Oct. 1 polls will be held on  the scheduled date.

How minorities in Iraqi Kurdistan are co-opted
The PUK has been joined by several other Kurdish parties in demanding electoral reforms—including the Gorran (Change) Movement, the New Generation Movement, the Kurdistan Justice Group, and the Kurdistan Islamic Union. 39 MPs from these parties are currently pushing for an amendment to change the electoral law. Their core complaint is that the existing single-district model for elections in Iraqi Kurdistan has allowed the KDP to gain outsized parliamentary representation by taking advantage of quotas for minorities.

According to the current electoral law, 11 seats in the KRI parliament are allocated to minorities in the predominantly Kurdish region. Five of these seats go to Assyrians, five to Turkmens, and one to Armenians. Other local minority groups, such as Arabs, Bahai’s, Kaka’is, Mandaeans, Yazidis, and Zoroastrians are not allocated quotas in the regional parliament.

The PUK and other political parties believe that the KDP has been able to co-opt minority representatives and thus gain more seats in parliament. Of note, most Assyrians and Turkmens in the KRI live in the KDP-controlled cities of Dohuk  and Erbil. The KDP and other Kurdish parties have been accused of creating political organizations that are loyal to them from these minority groups. The Gorran Movement has also claimed that the KDP encouraged many Peshmerga fighters and police officers to vote for minority lists in the previous (2018) parliamentary elections.

Shaswar Abdulwahid, the leader of the New Generation Movement, has chastised the ruling parties of Iraq—including the KRI—for using minority groups as political pawns. Indeed, the existing political process is fragmenting minority communities and eroding already-weak trust in the democratic process.

Kurdish parties are locked in a stalemate
The current KRI parliament’s term ends on Nov. 6, and elections must be held before then. But all sides have dug in their heels over the electoral law, creating immense political uncertainty. For instance, Sherko Jawdat, the head of the Kurdistan Islamic Union’s parliamentary bloc, stated on Apr. 5, “The Kurdistan region should not be a single electoral district as that leads to the control of one party over all districts,which will have negative repercussions.”

The PUK and its allied parties want the KRI to be split into four electoral districts, namely Erbil, Duhok, Halabja, and Sulaimaniyah. Of note, while different minority groups live in Sulaimaniyah and its surroundings, they currently have no representation in the regional parliament.

The PUK is drawing a hard line on electoral reform taking place before the upcoming Oct. 1 elections. Stran Abdullah, a member of the political bureau of the PUK, confirmed on Apr. 5 that his party “will not participate in the parliamentary elections…unless the election law is amended.”

The PUK’s insistence on electoral reform may also be a part of the ongoing negotiations to form the next government in Baghdad. Iraq has been left without a new government in the six months since the elections for the Baghdad parliament last October. While the PUK is aligned with the Iran-backed Shiite Coordination Framework in the political battle in Iraq’s capital, the KDP is part of a rival coalition with the Sadrist Movement and the main Sunni Arab parties.

As such, the longer the political deadlock in Baghdad drags on, the more it will exacerbate differences in Iraqi Kurdistan. If the stalemate between the KDP and PUK continues and no agreement is reached on the KRI electoral law, the Kurdish parliamentary elections will likely be postponed.

In the previous 2018 polls, the main parties needed roughly 15,000 votes for a legislator to be elected, with turnout at roughly 50%. In contrast, for the 11 seats in the regional parliament reserved for minorities, only about 1,500 ballots were necessary.

Consequently, minority seats are an easy grab for dominant parties such as the KDP. But if the electoral law is reformed and minority quotas are spread out across multiple districts, the KDP may no longer be able to co-opt these groups and could lose its control of minority seats in  parliament.

All in all, the instrumentalization of minorities has been a pervasive and anti-democratic feature of politics not just in Iraqi Kurdistan but the whole country since the 2003 US-led invasion. If Iraq is to develop a more representative political system, minority groups must be permitted to become independent of major political parties and elect representatives from their own constituencies.

This article was published on the  Amwaj Media website on April 14, 2022, under the title  “Iraqi Kurdish politics in gridlock over minority representation” .