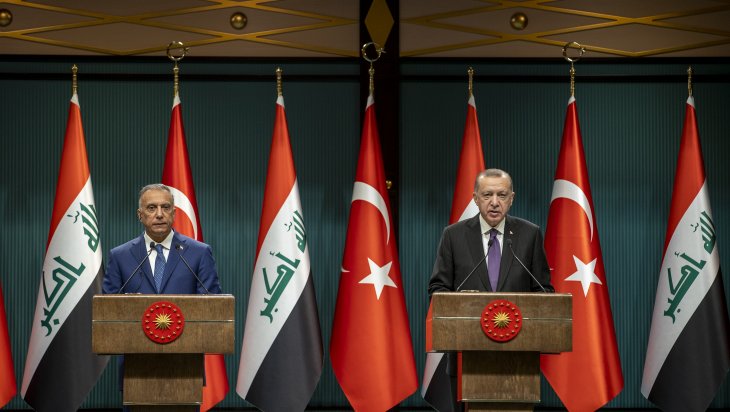 Iraqi Prime Minister Mustafa al-Kadhimi visited Ankara on 17 December 2020 with a high-level delegation to strengthen the relations between Turkey and Iraq and to discuss the problems involving the two countries. The visit, which was held at the invitation of President Recep Tayyip Erdogan on October 14, 2020, is critical for the two countries in terms of determining the future of relations, as vaccines against the coronavirus (Covid-19) epidemic are developing and world trade is preparing to revive. Nine issues including security, economy, investment, energy, water, connecting the two countries by rail, visas, frozen assets, and the new border gate were discussed during al-Kadhimi’s visit. In addition to these issues, the Turkmen presence in Iraq and representation of the Turkmen population in the central Iraqi government have come to the fore as one of the major issues between Turkey and Iraq.

Although Turkmens are the third principal element in Iraq in general, they cannot obtain the political rights that their population distribution in Iraqi society should provide them. Turkmens, who are the principal elements in Iraq, have played an important role in alleviating the Arab-Kurdish and Sunni-Shiite conflict in different periods of the country due to the geography they live in. In addition to their role in maintaining peace among the Iraqi people, their efforts for the implementation of the understanding of common administration in central, regional, and local governments in terms of protecting the diversity and democratic values in the country are very important for the progress of democracy in the country. Although the Turkmens played an important role in the unity of the country and in enriching diversity among the people, they remained out of the government in modern Iraqi politics.

To ensure the representation of Turkmens in the government of Mustafa al-Kadhimi, which was formed on 6 May 2020, the Iraqi Parliament gave al-Kadhimi the authority to constitute the ministry of state on 7 June 2020. Hasan Ozmen, the candidate for minister nominated by the Turkmens and presented to the parliament, passed away and Murat Gedik, the Executive Committee Secretary of the Iraqi Turkmen Front, was nominated instead. However, Murat Gedik also died as a result of a traffic accident.

After the death of Hasan Ozmen, Hiyam Nimet Koprulu, one of the two candidates along with Murat Gedik, surprisingly was nominated to the parliament just two days before al-Kadhimi’s Ankara visit and received approval from the parliament as a minister. Although al-Kadhimi’s visit was announced prior to Koprulu’s approval, the Turkmen minister accompanied the head of the Iraqi Turkmen Front and Kirkuk Deputy Erşat in the delegation to visit Turkey. Appointing Koprulu and having Turkmen officials in the delegation can be seen as steps toward strengthening the relations between Turkey and the al-Kadhimi government and overcoming the problems between the two countries. Furthermore, it appears that al-Kadhimi is trying to show he is sensitive to Turkey's concerns in Iraq regarding the Turkmen population.

It is unlikely that the Turkmen minister receiving a vote of confidence in the Iraqi parliament just two days before al-Kadhimi’s visit was a coincidence. After all, Mevlut Cavusoglu’s visit to Baghdad, Basra, and Arbil in April 2019 was effective in the appointment of the IKRG Minister Aydin Maruf as a state minister. Cavusoglu’s visits to the Turkmen Group in the Iraqi parliament and the Iraqi Turkmen Front-Erbil Provincial Directorate are crucial in the efforts of the Republic of Turkey to secure the Iraqi Turkmen population’s political rights. In the press conference held by President Erdogan and Mustafa al-Kadhimi on December 17, 2020, Erdogan stated that “We see Turkmens, Kurds, Arabs, Shiites, and Sunnis as well as the Iraqi people as our brothers, regardless of their sect or ethnicity. We believe that the Iraqi government will ensure the peace of all Iraqi people through inclusive and encompassing policies. The fact that Prime Minister al-Kadhimi gave a place to a Turkmen minister in the Iraqi cabinet after a long time has reinforced our belief. Once again, I congratulate the Prime Minister for his decision, which is very meaningful for our nation and the Iraqi Turkmen.” His statement shows that Turkey maintains and prioritizes Iraqi Turkmens obtaining their political rights and being treated as the third principal element in the Iraqi administration. It is even thought that Recep Tayyip Erdogan’s definition of Iraqi people, starting with “Turkmens” and then mentioning other groups in Iraq was to highlight the importance of Turkmens for Turkey and to convey that message to al-Kadhimi.

Iraqi Turkmen Front President and Kirkuk MP Ershad Salihi made a statement on social media on the first day of al-Kadhimi’s visit. He said “Iraqi Turkmens will strive constantly to keep the bond strong between Turkey and Iraq. We also tried to strengthen this bond on our visit to Turkey. Important issues such as the Ovaköy Border Gate, commercial agreements, and the lifting visa requirements were discussed today.” This statement shows that Turkmens are an anchor for both countries and that they can play a facilitating role in the development of relations between Turkey and Iraq.  Just as Turkey has not developed a policy towards Iraq by ignoring the Iraqi Turkmens, the Iraqi government shows that it does not want to establish problematic relations with an important country like Turkey by excluding Turkmens. It can be inferred from Salihi's statement that the Turkmens are trying to follow a policy of balancing in the foreign policy of both countries in the relations between Turkey and Iraq.

On the other hand, President Erdogan's pose with Turkmen Minister Hiyam Nimet Koprulu, Turkmen artist Ahmet Tuzlu, and Iraqi Prime Minister al-Kadhimi during the ceremony held at the Presidential Complex during the al-Kadhimi’s visit can be considered as a very meaningful message regarding Turkey's interest in the Iraqi Turkmen population. Ahmet Tuzlu, whose origin is Tuz Khurmatu, sang Turkmen, Arabic Turkmen, and classical Iraqi songs at the ceremony. The event was to show that Turkmens are one of the well-established elements of Iraqi society who have lived in Iraq for more than a thousand years.

Other important issues regarding al-Kadhimi’s visit from the point of view of the Turkmen were the Ovaköy border crossing, which Salihi pointed out, and the railway project that will connect Basra to Turkey which was announced by the Iraqi Transport Minister Nasser. In Tal Afar, where Turkmens live predominantly, negotiations were held to open the Ovaköy border in the north of Tal Afar, which is critical for the development of trade and the realization of development in the region. The Ovaköy border gate, which makes Iraq a commercial bridge connecting Turkey and the Persian Gulf and connects Turkey to Gulf countries, has crucial importance. Opening the border gate can make Ovaköy one of the stopping points on the trade route of Tal Afar and Mosul. It can contribute to the development of the region and pave the way for the return of those who fled the terrorist organization ISIS but want to return due to unemployment. Besides, opening the border crossing can create jobs and reduce unemployment, considering the terrorist organization PKK is known to generate recruits by exploiting the weak economic conditions in the region.

On the other hand, thanks to the appointment of Hiyam Nimet Koprulu, Turkmens who were not represented in the Iraqi central government between 2014 and 2020 can now be able to assume the positions of vice president, deputy prime minister, and qualified ministries in the future central governments in Iraq. Due to the improvement of relations between Turkey and Iraq, Turkmens can act as a bridge between the two countries. Furthermore, Turkey’s increased influence in Iraq will facilitate the granting of political rights for the Turkmen population in Iraq. The unaffected relationship between Turkmens and Turkey continued after the Ottoman Empire, and at no time did the tie between Turkey and Turkmens’ break. Even in periods such as the 1980-1988 Iraq-Iran War, the 1991 Gulf War, the 2003 US invasion, subsequent processes, and the 2014 establishment of the terrorist organization ISIS in Iraq in the Turkmen regions, there were mass Turkmen migrations to Turkey. Due to the consistent migration flow, tens of thousands of Iraqi Turkmen still live in Turkey. With the rapprochement of Turkey and Iraq, Turkey's assistance and investments in the Turkmen regions in Iraq in particular, will facilitate the return of Turkmen who emigrated to Turkey, thus paving the way for Turkmens to play an effective and even integrative role between the two countries.