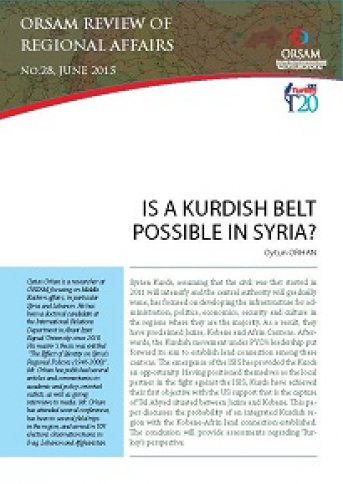 Is a Kurdish Belt Possible in Syria?

Syrian Kurds, assuming that the civil war that started in 2011 will intensify and the central authority will gradually wane, has focused on developing the infrastructure for administration, politics, economics, security and culture in the regions where they are the majority. As a result, they have proclaimed Jazira, Kobane and Afrin Cantons. Afterwards, the Kurdish movement under PYD’s leadership put forward its aim to establish land connection among these cantons. The emergence of the ISIS has provided the Kurds an opportunity. Having positioned themselves as the local partner in the fight against the ISIS, Kurds have achieved their first objective with the US support that is the capture of Tel Abyad situated between Jazira and Kobane. This paper discusses the probability of an integrated Kurdish region with the Kobane-Afrin land connection established. The conclusion will provide assessments regarding Turkey’s perspective.