Is the U.S. preparing the world for the Plan B? 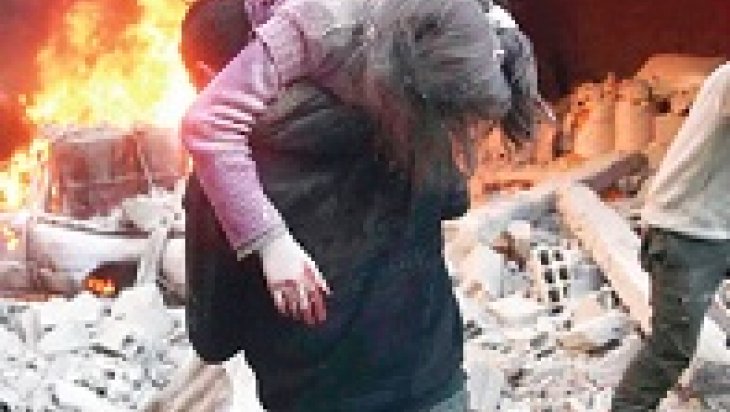 In the beginning of the popular uprising in Syria, almost everyone expected that the Assad regime will be replaced in a short while. The widespread projection was that the transformation in Tunisia, Egypt and Libya would not be contained in North Africa and the authoritarian regimes in the Middle East would be replaced by democratic political structures.

From the mid-2011 onwards, the Syrian popular uprising turned into an armed resistance movement. With the arming of the opposition, the Assad regime intensified its use of violence. the opposition struck at the heart of the Syrian regime in July 2012. High level officials were killed in the attack against the national security complex. The balance of power tilted against the regime and defections gained momentum. Pro-regime actor had started to increase their support progressively. While Iran and its proxies supported the Syrian Army’s operations on the ground, Russia mobilized its political and diplomatic leverage for the benefit of the Assad regime. In this period, the opposition had proved to be a serious force, even capable of threatening the Presidential Palace. Nevertheless, the Assad regime has managed to prevent the capture of Damascus, finalized its defense phases and gone on the offensive.

Destroy if you cannot control

The military balance in Syria has started to shift in the beginning of 2013 with the direct involvement of Hizbullah in the civil war. The Assad regime has developed a new aerial tactic, indiscriminately bombarding the places that it cannot reach on land. This method had heavy humanitarian consequences such as large numbers of civilian casualties and migration waves, yet it enabled the regime to clear the areas it cannot control. Though, both the military and civilian opposition was unable to solve their unity problem. It is the same for their foreign supporters. Each foreign supporter has sought to promote the actors that it can easily cooperate, therefore deepening the rift between the opposition groups about their competition and ideological differences.

The Assad regime’s military strategy involved creating a “minority alliance” in the country, radicalizing the Sunni population, dividing the country in ethnic and sectarian lines and procuring legitimacy through the minorities’ security concerns. This strategy has worked thanks to the regime’s efforts, the poor performance of the opposition in some areas and most importantly the interference of DAESH in the civil war. It was particularly the emergence of DAESH that contributed to the Assad regime’s quest for domestic and international legitimacy. From that period onwards, the regime was able to defend better its argument to both Syrians and international community that it is “fighting against terrorists.” In spite of the emergence of DAESH, the strengthening of the regime and the weakening of the opposition from 2013 onwards, there has always been a third alternative in Syria besides the regime and DAESH.

The threat perceptions have changed

In the beginning of 2015, the military balance tilted in favor of the opposition. That was possible due to the increased foreign support and the opposition’s joint operations under umbrella organizations. The Army of Conquest comprising 13 different opposition groups managed to wrestle control of the Idlib countryside and the urban area from the regime. The capture of Idlib was the second time the regime lost control of a major provincial center, while the first was Raqqa. The opposition made some gains in Aleppo central and countryside, Deraa and its surroundings and the Damascus countryside. These developments could have made the regime realize that a military victory is no longer possible and view a political solution more favorably. Yet, two other groups, DAESH and YPG, have also made gains in this period. DAESH vastly expanded its territories after capturing Mosul in Iraq in June 2014. Benefiting from its military and financial gains in Iraq, DAESH started to advance in the north of Syria. In this period, the priorities and threat perceptions of the international community started to change. In the last quarter of 2014, an international intervention led by the U.S. took place in Syria, though it was not against the regime as many expected from the onset of the civil war, rather it was against DAESH. The winners of the international coalition and intervention against DAESH was the regime and YPG, while the opposition lost in the military aspect. The U.S. and the West picked YPG, the self proclaimed representatives of Syrian Kurds, as the only reliable local partner in the fight against DAESH, enabling it to expand its territory. YPG has advanced beyond the Kurdish areas and towards the Turkmen and Arab settlements. In addition, it had the chance to become a regional actor in the fight against DAESH. The single most important development that made the situation more complex took place near the end of 2015. As the regime grew weaker, Russia decided to get involved in the civil war. This move tilted the military balance in favor of the regime, which started to advance against the opposition in Latakia countryside, Aleppo countryside and Deraa under the Russian air cover. ıts most important achievement was the siege of Aleppo and advance towards the Turkish border.

As of the beginning of 2016, the Syrian civil war has transformed into perhaps the most complex problem of the world history, involving an intense degree of foreign influence and intertwined connections. Currently, one may observe a four-front warfare and geographical disunity in Syria comprising the regime, the opposition, DAESH and YPG. Among these, DAESH and YPG enjoy relative internal coherence, while the regime and the opposition lack such an integral structure. The regime side includes Russia, Iran, local militia and foreign militia comprising foreign fighters from Lebanon, Iraq and Afghanistan. The opposition front is even more complex. Even though the opposition acts together in many areas, their alliance is fragile at best. They tend to compete over leadership, area control, resource sharing, and ideological differences. Nevertheless, they have been fighting against the common threat for long years.

The Cessation of Hostilities and Its Chances for Success

The regime has motivated itself for a military victory now that the Russian involvement in the war guarantees quick military advance. It will think that its short term goal of capturing Aleppo and Idlib in the north and reaching the Jordanian border in the south is attainable. In this period, Russia and the regime will annihilate the alternatives to DAESH and force the world to choose between “either the regime or DAESH.” This is exactly the reasoning beneath their advance against the opposition-held areas. Despite their recent setbacks, the opposition will seek to curb the momentum of the Russian assault by keeping Aleppo and Idlib in the short term. They will think that the time will work in their favor if the manage to survive this onslaught. YPG is the most determined actor in terms of its objectives. From the onset of the civil war onwards, it has sought to establish control along the Turkish border probing for exit to the Mediterranean Sea. The Azaz-Jarablus axis is the last obstacle in front of YPG’s goal. Unable to approach westwards from Kobane due to the Turkish pressure, YPG has opted for advancing eastwards from Afrin with Russian support in order to reach Azaz. Though, the regime and YPG are likely to come at odds in the period ahead, after a long period of cooperation. The both actors seek to eliminate the opposition and reach the border with DAESH. Once they reach DAESH, they will not have problems of legitimacy or military support. All the while, DAESH will seek to advance around Aleppo, benefiting from the fighting between the opposition and the regime.

Along with the military developments in the field, political solution attempts depending on the U.S.-Russia consensus hastened. The most important reason beneath the urgency of a political solution is that the Syrian crisis started to directly threaten the West. The refugee flow to Europe and the terrorist attacks by DAESH fighters in European countries has made the West realize that the Syria problem can no longer be contained in its own borders

The efforts resulted in the sides agreeing for the cessation of hostilities in February 27. DAESH and al Nusra, the Syrian branch of Al Qaeda, were not included in the agreement. Besides, there is still uncertainty as to which groups are considered moderate opposition. It further jeopardizes the cessation of hostilities. The U.S. and Russia remark that operations against DAESH and al Nusra will continue. Though, the line between al Nusra and the opposition is unclear for an air operation in many places particularly Idlib. It is questionable as to how the distinction will be applied. In addition, the cessation of hostilities will be meaningless for many local opposition groups and regional actors including Turkey, once that Russia labels the groups in the north as terrorists and starts bombarding them.It is no longer possible for one actor to impose its own plan for Syria. A roadmap for a genuine political solution and ceasefire is possible only through a middle road that takes into consideration the priorities of all sides, rather than a super-imposed “peace” settlement. There is a chance for success if all sides are genuinely frank. Though, the U.S. Secretary of State John Kerry stated that if the cease fire agreement fails, the Plan B would be the partition of Syria. This statement has two meanings, either the U.S. seeks to enforce peace through suggesting the worst case scenario or prepares itself and the world for the Plan B.