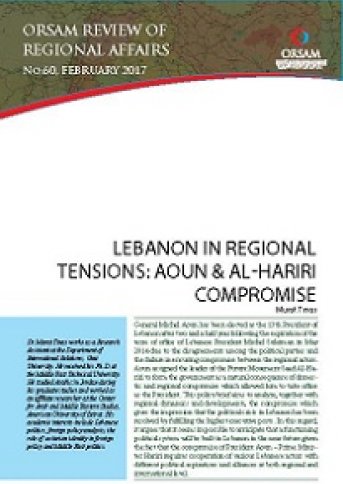 General Michel Aoun has been elected as the 13th President of Lebanon after two and a half year following the expiration of the term of office of Lebanese President Michel Suleiman in May 2014 due to the disagreements among the political parties and the failure in ensuring compromise between the regional actors. Aoun assigned the leader of the Future Movement Saad Al-Hariri to form the government as a natural consequence of domestic and regional compromise which allowed him to take office as the President. This policy brief aims to analyze, together with regional dynamics and developments, the compromise which gives the impression that the political crisis in Lebanon has been resolved by fulfilling the highest executive posts. In this regard, it argues that it seems impossible to anticipate that a functioning political system will be built in Lebanon in the near future given the fact that the compromise of President Aoun – Prime Minister Hariri requires cooperation of various Lebanese actors with different political aspirations and alliances at both regional and international level.