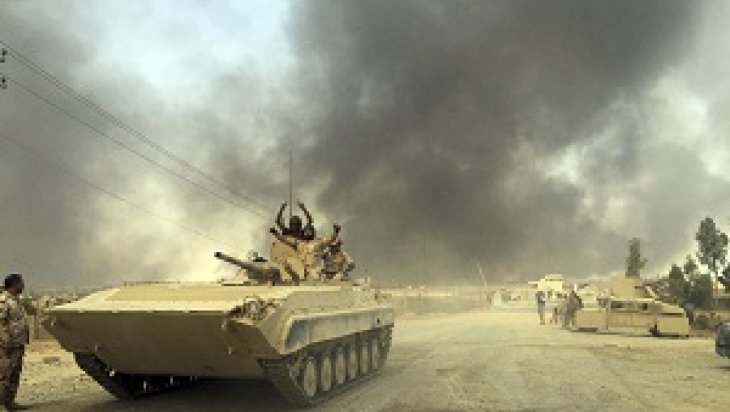 US is seeking a success story in the fight against ISIS before the new president takes office. That’s why as the elections approach, conducting operations in Mosul and Raqqa, the two ISIS “capitals” in Iraq and Syria, has been brought to the agenda. The main problem with the fight against ISIS is which powers will replace the gap that ISIS will leave behind, rather than defeating it through military operations. Another problem is the deep distrust between the forces which fight against ISIS. This has been a major factor which prolonged the life of ISIS.

In fact, US’s priority in Syria was capturing Raqqa rather than advancing in the west of Euphrates. Raqqa, however, doesn’t have a strategic importance for PKK/YPG. Raqqa is a big city with majority of Arab population, where ISIS is the strongest. Even if YPG drives ISIS out of Raqqa, YPG knows that it would be difficult to keep the city under control. This is why YPG was trying to pull US to the Manbij-al-Bab line while US was leading YPG to Raqqa offensive. So first US helped its local ally to form a federal district with administrative and geographical integrity in Northern Syria and then planned to move to Raqqa. YPG first captured Manbij and was about to reach Afrin through Tell Rifaat by taking al-Bab, as well. At this point, the cooperation was expected to continue in Raqqa. But Turkey’s military intervention in Syria with Operation Euphrates Shield complicated things for US in terms of uniting YPG regions and the upcoming Raqqa offensive. Turkey, who seemed like outside the game in Northern Syria, took direct responsibility in the field and stood out as the most powerful actor in this power struggle in Northern Syria. Having started to push ISIS out of Azaz-Jarabulus line, Turkey also offered US to launch the Raqqa offensive together. Under normal circumstances, US could have considered Turkey’s actions to take responsibility as an opportunity. But defeating ISIS was just as important as who will control the region after ISIS. US wants YPG to fill the gap after ISIS and formation of an area of influence for US in Northern Syria. That’s why as Turkey was added to the equation in Raqqa; the situation became complicated for US and Mosul offensive was put forward.

There are many questions regarding the Mosul offensive launched on September 17, 2016 and more importantly the situation after ISIS. Many internal and external actors with different expectations have already engaged in a power struggle in Mosul after ISIS. The internal actors are Iraqi government, Kurdistan Regional Government (KRG), Hashdi Shaabi (Shiite Militias), Mosul forces trained by USA, Hashdi Vatani (Mosul forces supported by Turkey), and PKK affiliated groups. Iraqi government, as the legitimate authority seeks to control Mosul’s center. But the Iraqi Army lost its ability to be the national force and suffers from serious lack of capacity. Mosul Arabs consider Iraqi Army as occupying force and believe that it is no different than the Shiite militia. Shiite militia, on the other hand, wants to take revenge for what happened in Mosul, in 2014 after ISIS captured the city. Although Iraqi government says that the Shiite militia will not enter Mosul, neither it has control over these groups, nor it stands a chance to defeat ISIS without their power. Shiite militias are uncontrollable and have radical tendencies. If they enter Mosul, there could be ISIS-like massacres in the Sunni regions saved from ISIS. If that’s the case, Mosul people can only join the fight for their own safety, not for supporting ISIS. KRG is focused on its narrow target rather than the center of Mosul. KRG’s only concern is; the areas inhabited by the minorities in the east of Mosul, and Sinjar, which was under KRG’s control before ISIS but now shares the control with PKK. It is highly possible for the Peshmerga to have success in the east of Mosul with the US’s air support. But the situation in Sinjar is more complicated. It is unlikely for KRG to go into combat with PKK, but KRG may hope for other forces to drive PKK out of the region. KRG could be the only internal actor benefiting from the Mosul offensive and taking an important step for defining its borders. The forces trained by Turkey and US, separately, can be accepted by Mosul people as they are local, but these forces have lack of fighter number, motivation and capacity. And finally, PKK and YBŞ (Sinjar Resistance Units), a PKK-affiliated Yazidi militia group, are interested in Tal Afar, close to Mosul. PKK and YBŞ are acting together with the Shiite militia and Iran. This was why President Erdoğan warned some Iraqi Yazidis before the Mosul offensive was launched. Standing out as the outside actors are US, Turkey, and Iran. With its air support, US is the most important actor regarding how the Mosul offensive will result in. US will try hard so that Iraqi government and Mosul forces trained by US have the control of the city. On the other hand, US will want to limit Turkey and Shiite militia, meaning Iran’s influence. US is aware that things will be very difficult in Mosul. That is why US may choose to keep a low profile, at first, to observe the battle and then take a stand accordingly. Iran, however, is supporting Iraqi government and Hashdi-Shaabi. Keeping its distance from KDP, Iran might be planning to open a corridor to Syria through PKK and YBŞ. The reason for Iran’s close contact with PKK and YBŞ is to have Tal Afar under its influence through these forces. It is known that the militia forces supported by Iran have intentions to enter Tal Afar. President Erdoğan must have mentioned Tal Afar in the same statement to point out these intentions. Considering the military balances Turkey seems to have weakest stand as an outside actor. However, Mosul’s geography and identity might make Turkey stronger in the long run. Turkey’s main expectation is to prevent the Shiite militia, which may cause new conflicts in Mosul, from entering the city. And more importantly, Turkey wants to stop PKK from advancing in Mosul and end PKK’s efforts to form a power center in Sinjar by creating a de facto situation, like the one in Syria. PKK/YPG is out to establish a state-like entity on the line from Sinjar to Afrin. The main reason behind Turkey’s interest in Mosul is to keep PKK out of Sinjar. Turkey and KRG might have a common interest in this respect. Turkey supported the idea, all along, that the local elements control their regions after-ISIS, in order to have permanent stability in Mosul. In that sense, Turkey trained Mosul Arabs, Turkmens, and fighters from minority groups in Bashika camp. But the number of fighters in Hashdi Vatani is not much and also they lack motivation and capacity. In the presence of these actors who all have different interests regarding the future of Mosul and who do not get along with one another, Mosul offensive may be hopeful to drive ISIS out but it is definitely not promising for the stability of Mosul after ISIS. Since every actor is interested in a different part of Mosul and if Mosul becomes part of game of push-in-the-corner after ISIS, it is very likely for Mosul to fall apart on the inside.

During the operation, different actors are expected to lay siege to the city from east, south and north while leaving a corridor open in the west. It is planned to make way for ISIS elements to move to Syria through this corridor. This means that the final big battle with ISIS might take place in Raqqa. The situation in Raqqa, which was easy before Euphrates operation, may even be more complicated. Raqqa may witness a power struggle between US, Russia, and Turkey. US is expecting to have a control over Raqqa through Syrian Democratic Forces led by YPG. US may prefer YPG, but like Mosul, Raqqa is also a city with a major Arab population. So it is not possible for US to control the city through YPG without cooperating with Sunni Arabs, to whom US does not really trust. US is also skeptical about Turkey’s role for now, but US may have to change its approach if Operation Euphrates Shield becomes successful, since what YPG can offer US has its limits. But under current circumstances, Turkey has also doubts regarding US intentions, as well. Leaving the control of the city to the hands of a Kurdish nationalist movement with no legitimacy just to form an area of influence, would only deepen the problem rather than solving it. It is not realistic for Turkey to stand by and watch the formation of a de facto region under the control of an entity, which is considered as a terrorist organization by Turkey. First of all, Turkey wants US to adapt in the current situation and to be convinced to act with Turkey regarding Raqqa. But in the eyes of US, Turkey will stand out as a more powerful actor in the east of Euphrates. This will create a risk for US area of influence under the control of YPG, which has taken a very long time for US to establish and is still supported by US for infrastructure. So US might include as much Raqqa Arabs as possible, in order to save the city from ISIS. It is obvious that if US includes YPG in Raqqa offensive, Turkey would not take part in the operation. But this does not mean that Turkey will be completely out of the equation. First possibility is that Turkey seeks for activities with Raqqa opposition groups and Arab tribes which Turkey has relations with. Raqqa might be too much to handle for YPG. Turkey can also wait for the conditions where Turkey would be needed. Even low possibility, Operation Euphrates Shield might advance to the east of Euphrates through ISIS regions or to have military activity through Tel Abyad, another city with a major Arab population. Turkey would become a strong actor in the east of the Euphrates, as well, and it would be more difficult to keep Turkey out of the Raqqa offensive. Turkey is not going to be able to take as much responsibility in Raqqa offensive as it did in Operation Euphrates Shield. Looking at how many Iraqi soldiers lost their lives on the first day of the Mosul offensive shows us how many more it could be in the Raqqa offensive. The last actors which will fight for Raqqa are Russia and Syrian regime forces. After Raqqa, ISIS will have no place to retreat and the terrorists would have to fight till the end. Also ISIS sent their highly motivated foreign terrorist fighters to Raqqa. In this situation, it would be difficult to obtain results through local allies. So it is important to observe how Russia, which watches for an opportunity for Raqqa, will take its position. Time will show whether the current relations between Russia and Turkey will enable them to coordinate or even cooperate with one another.