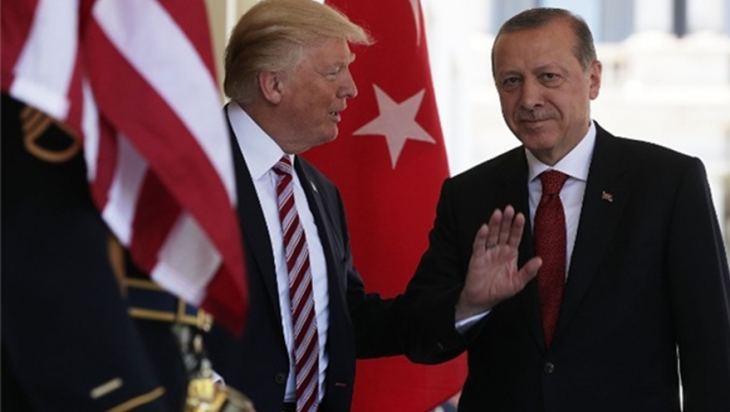 Changes in the U.S. administration will largely determine the cooperation between the United States and Turkey in Syria. Mike Pompeo, who will soon replace Rex Tillerson as secretary of state, and John Bolton, Trump’s latest pick for national security advisor, both prioritize the containment of Iran, and both hold similar views to the Pentagon in acting unilaterally rather than using the means of diplomacy in foreign policy.

Turkey’s Operation Olive Branch has successfully removed the People’s Protection Units (YPG) presence in Afrin. While Turkish Armed Forces (TAF) and Free Syria Army (FSA) made a slow start and faced difficulties in the early stages, the YPG’s resistance was broken at the border of Afrin City. The bloody urban warfare that was widely expected did not occur as the YPG made a surprisingly rapid withdraw. The questions now are what kind of civil administration and security structure Turkey will set up in Afrin, and what effects this operation has had on U.S.–Turkey relationship in Syria.

A New Model for Afrin

As the political success of Operation Olive Branch will depend highly on public opinion, and a part of the population of Afrin does not sympathize with Turkey and has security concerns stemming from the FSA, the security and civilian structures Turkey sets up in Afrin are crucial.

As was the case in the aftermath of the earlier Operation Euphrates Shield, Turkey is expected to build a security structure in Afrin and other settlements in the area based on local elements to alleviate security concerns of the local population stemming from FSA presence in their territory. The FSA can still take charge in the rural areas as was the case in the Euphrates Shield Operation, but not show presence in the city center. The TAF are expected to hold strategic points to deter potential YPG threats toward Afrin, to function when there is a security breach, and to focus on training activities. Additionally, the TAF may establish permanent military bases in strategic points of the city to address any YPG threat in the long run.

Turkey will likely form a civilian council composed of leading local figures, who will administer basic services, infrastructure works, and maintenance. The formation of functioning judicial and executive branches and the provision of education and health services will also be top priorities. A local assembly with 35 members was established through the Afrin Liberation Congress organized by the Association of Syrian Independent Kurds constituted by non-PYD political figures and activists from Afrin in the wake of the Operation Olive Branch. This assembly will temporarily undertake civilian administration in Afrin until local elections ultimately determine positions of authority.

The most important consequence of Olive Branch for Turkey has been the foundation of its military deterrence. The Turkish army which had to fight a larger number of militants in a more difficult terrain compared to the Euphrates Shield completed the operation in less time and with lower casualties. As result, Turkey proved its military capacity and the resolve to use it when it deems necessary. Turkey now has a strengthened hand in Syria, including in Manbij and the East of the Euphrates River — a clear win.

Operation Olive Branch will also have an impact on the talks between the United States and Turkey to reach a settlement over YPG presence in Manbij and the East of the Euphrates River. Turkey’s success in this operation and the fact that YPG could not put up a proper resistance may lead the United States to reconsider its approach to the question of support to YPG in Manbij in two alternative directions: either phasing out support to the YPG or strengthening the protection shield it provides to the YPG in Manbij. This choice will ultimately determine the future of U.S.–Turkey cooperation in Syria.

Olive Branch also revealed the priority given by Russia to cooperate with Turkey in Syria and beyond. Not only did Russia enable the operation by opening up the Syrian airspace over Afrin to the Turkish Air Force, it also remained neutral between Turkey and Iran-Syrian regime when the latter two tried to infiltrate Shia militia into Afrin to prevent Turkey’s operation, an attempt which Turkey pushed back by force. As Iran and the Syrian regime are considered to be Russia’s main allies in Syria, this neutrality is significant and perhaps a sign that Russia aims to balance Iran with Turkey in Syria.

Olive Branch has impacted the power of the Syrian opposition, which is now strengthened in a way that will affect the political solution to the conflict. Parallel to the end of the operation, TAF established the ninth observation point in Idlib. With the completion of 12 observation points, the control of the opposition in Idlib will be secured at least in the midterm. Thus, a FSA-controlled area will emerge starting from Jarabulus to Jisr al-Shughur. The reality of this FSA-zone under Turkish protection will make the regime more likely to make concessions to the Syrian opposition in the political process.

Cooperation in Manbij and East Euphrates

The United States and Turkey share a long history of security cooperation, prominently as NATO Allies. However, two factors limit the possibility for cooperation in Manbij and east of the Euphrates River. First, Turkey considers the YPG as an extension of the terrorist organization Kurdistan Workers’ Party (PKK) in Syria and will not tolerate its presence anywhere along its borders. The United States will not give up the zone of influence it holds east of the Euphrates River, where it is cooperating with the YPG as its main partner on the ground. These two positions narrow the perspective for U.S.–Turkey cooperation in Syria to a formula in which the U.S. sphere of influence in Manbij and the east of the Euphrates is protected and the internal structure of this zone is reshaped based on Turkey’s security concerns, but in a way that is also agreeable to the United States.

From the Turkish perspective, U.S. military presence in Manbij or the east of Euphrates is not a problem — but U.S. cooperation with YPG is. While YPG has no clear majority among the ranks in the U.S. and Coalition-backed Syrian Democratic Forces (SDF), it has almost exclusive control over the top command. Turkey’s objections can be mitigated if the role of the YPG in the SDF is diluted, and the role of Kurds who are not affiliated with the Democratic Union Party (PYD) and Arabs is upgraded. As a matter of fact, an important piece of the problem would be solved by restructuring the SDF in a way that places non-YPG Kurds, Arabs, and Turkomans — jointly chosen by the United States and Turkey — in the top command of the SDF.

Furthermore, Turkey aims to guarantee border security in the region. Its military arrangements starting from Jarabulus to the Iraqi border will also eliminate the security concerns, as well as create a basis for cooperation with the United States in the east of the Euphrates. In this respect, the establishment of a safe zone with a depth of 30 km on the border between Turkey and Syria in the east of the Euphrates may be a critical step.

If an agreement between the United States and Turkey cannot be reached, Turkey could cooperate more closely with Russia and Iran in Syria, including in the east of the Euphrates. Although an extensive ground operation by Turkey resembling the Euphrates Shield or Afrin toward Manbij is not likely in the short run without coordination with the United States, Turkey could conduct limited unilateral military actions against the YPG threat in the border region, especially in Manbij and Tell Abyad. In this case, the United States would need to deal with Turkey’s disruptive role, as well as the existing challenges emanating from Russia, Iran, and the Syrian regime.

New tensions between Turkey and France are emerging as well. France recently promised the YPG to give more military support and offered a mediation between YPG and Turkey in a process when negotiations on Manbij between the United States and Turkey continue. In the background of this step, it is likely that President Trump is asking France for more support to the Global Coalition efforts in Syria. This would lead to more significant protection of the YPG-controlled area — and not only by the United States. The possibility of similar U.S. demands from other Coalition members, on the other hand, could jeopardize Turkish efforts toward YPG areas and lead to new tensions between Turkey and its NATO Allies.

The new security team in the U.S. administration may either decide to cooperate with Turkey in containing Iran, therefore accommodating Turkey’s concerns in Syria — or they may insist on cooperation with YPG, not only against the self-proclaimed Islamic State but also Iran, blatantly ignoring Turkey’s concerns. How Turkey reacts to any U.S. proposal to cooperate against Iran will naturally be one of the key factors determining the U.S policy in Syria going forward.