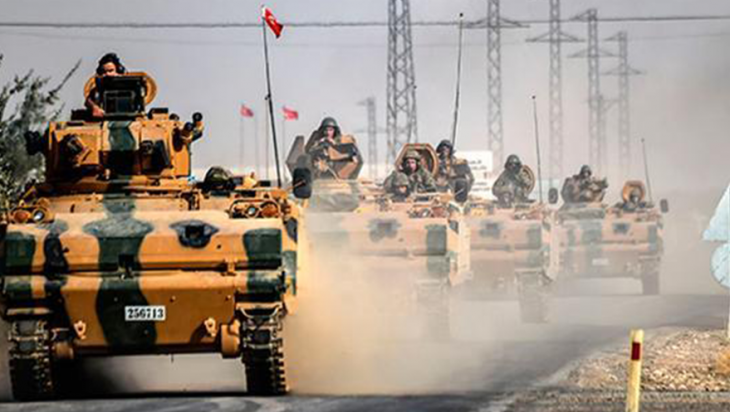 It was highly anticipated that the civil war in Syria would come to an end with the extinction of Daesh in 2018 and the parties would pass to the political solution phase. However, the fact that the fight against Daesh is almost over has triggered new conflicts in Syria. The de facto borders formed in Syria are not still satisfying for many actors and these actors demand a new distribution of power.

It can be said that four conflict dynamics have emerged/strengthened in Syria following the end of Daesh:

a. The exacerbation of tensions in Idlib and the Eastern Ghouta while the conflict-free zone deal between the regime and the opponents showed a falling tendency.

b. The increasingly continuation of Turkish military actions against YPG/PKK in northern Syria.

c. The emergence of a new conflict dynamics between Russia/Iran/Regime alliance and the USA/YPG alliance in eastern Syria.

d. Direct and indirect confrontation between Iran and Israel in Syria.

Turkish military presence in Idlib as an assurance

The Syrian regime and Iran think that political opponents will not be able to obtain political concessions over the small points they control. Although the two countries are signatories of the conflict-free zone deal, they have regarded it as a means to save time, limit the opposition and turn to different front lines. The regime and Iran are committed to continuing the war as long as the Syrian territory comes under the authority of Damascus. The most crucial sign of this thought is the artillery shootings carried out by the Iranian militia and the regime on the elements of the Turkish army that were sent for the task of creating an observation point in Idlib. Another sign is that the elite elements of the Syrian army that completed the Abu al Duhur operation in Idlib have been deployed to the Eastern Ghouta region. Hot clashes may explode out in the Eastern Ghouta which has recently been regarded as a conflict-free zone.

The only option for the Syrian opposition seems to be the solution Turkey offers. The last operation of the regime in Idlib has revealed that the resistance of the opponents has been gradually diminishing. The only way to provide civilians and opponents with stability and security in Idlib is the Turkish success in creating the 12 observation points. Idlib people and opponents think that Turkish troops will provide assurance against the regime in Idlib and can prevent Russian air strikes. However, the biggest obstacle to the implementation of this plan is the radicals consisting of foreign warriors within the HTS.

Despite the risk of attack by this party, Turkey has accelerated the process of forming observation points in Idlib. Besides, people from different opposition territories as well as Idlib seem to want Turkey to set up observation points as a guarantee against the regime but it is not realistic to realize this without any coordination with Russia and Iran. Even though Russia wants to put Turkey forward as a counterbalance to Iran, the regime and Iran do not seem willing for such a plan.

US-Russia rivalry warms up in Syria

Turkey wants to protect the military balance between the regime and the opposition and to reach a political solution over existing borders; it is also determined to eliminate YPG/PKK regions. Preparing for a long time to this end, Turkey launched the military operation directly against YPG in Afrin along with the provision of the necessary coordination with Russia. The Afrin operation is probably Turkey’s first stage in the fight against YPG/PKK and it is not a secret that following Afrin, Manbij and the east of the Euphrates would be brought up to the agenda. Therefore, it can be easily said that the northern Syria where tensions have increased by the Afrin operation will go through hotter developments in the forthcoming period.

The regime-YPG relationship has been changing since the beginning of the civil war. However, in general terms, the two sides have never been the priority threat of one another. They developed a cooperation based on not fighting against common threats and acting together from time to time. Nonetheless, the two sides never completely relied on each other. The weakening of common threats, the increase of YPG's military engagement with the US, the beginning of YPG's control of large territories and oil-rich areas, and its federative demands also changed the nature of the relationship between the parties.

This competition manifested itself most clearly during the competition between the two sides for the seizure of the city of Deir ez-Zor. It was the regime who won the city, but the YPG was able to capture the rural areas of Deir ez-Zor in the east of the Euphrates River, under the auspices of the US. Even though the regime has taken control of major settlements and the border gate with Iraq, the richest oil regions and the most fertile agricultural areas are in the hands of YPG. This, in the wake of competition over Deir ez-Zor, ignited the wick of a new conflict between the parties. The regime forces and the Russian militia moved towards the east of the Euphrates to take back an oil field controlled by YPG. The US response to the regime was quite harsh. Over 100 Syrian soldiers and Russian militia lost their lives as a result of air strikes and artillery shooting. The United States tried to show its determination to back up its ally YPG/PKK, which it had failed to protect in Afrin, at any cost in the east of the Euphrates and that these areas were "untouchable". The American attack can also be regarded as a message not only to the regime but also to Turkey which intends to enter in Manbij. However, the US response is not likely to hinder either the regime or Turkey. For the regime forces have already begun preparations for a new attack on YPG/PKK areas in the countryside of Deir ez-Zor. It would not be a surprise to hear some breaking news on this front in the upcoming days. This situation also means that the US-Russian competition upon Syria will increasingly come into heat.

Mobility on the southern front

Finally, news regarding a conflict came from the southern front that had remained silent for a long time. After an Israeli fighting jet that entered the Syrian airspace in order to shoot down an Iranian unmanned aerial vehicle(UAV) was shot down by Syria's air defense systems, Israel carried out airstrikes to bomb the targets belonging to Iran, Hezbollah and the regime in Syria. Israel has long been watching Iran and its proxies strengthening their powers in Syria, but is unable to make a move. Those who make predictions concerning when the Syrian civil war will come to an end had better take into account the fact that sooner or later Israel will settle old scores with Iran in the Syrian territory.

All these developments mean that we are still far from reaching an agreement to terminate the civil war in Syria. From the Turkish perspective, it is possible to say that they widen their playing field.

There exist two basic challenges Turkey needs to deal with in Syria. The first is to fight against YPG and the second is to provide the Syrian opposition with a way out. Turkey has managed to deal with these two objectives which are extremely difficult to run together in a parallel way. Turkey managed to stimulate the opposition to fight against first Daesh and then YPG and fill the gap left by the two terrorist organizations by the opposition again and create a win-win situation. The opposition who even lost the Azez-Mare line in advance of the Euphrates Shield, now controls the Euphrates Shield region, is expanding their fields in Afrin and has established a geographical connection with Idlib. Turkey, on the other hand, has made a crucial progress in cleaning the west of the Euphrates and considerably increased its presence in the field compared to the pre-Euphrates Shield period.

Increasing contradictions and hot conflicts that take place between competing forces in the Syrian conflict also increase the number of options for Turkey. In the present atmosphere, the best way for Turkey to pursue in Syria is to benefit from competitions and conflicts between other actors, to develop temporary alliances in cases where a sole Turkish attempt is not enough and to increase its presence in the field by taking risks when the opportunity arises, which Turkey seems to be exactly doing in the recent period. From this point of view, the escalation of the US-Russia rivalry, contest between Iran-regime/YPG, and the Israel-Iran confrontation can pave the way for new opportunities for Turkey.

This article has been published in Anadolu Agency News Analysis on February 16, 2018 with the title “Suriye’de yeni çatışma dinamikleri ve Türkiye (Turkey and new dynamics of conflict in Syria".