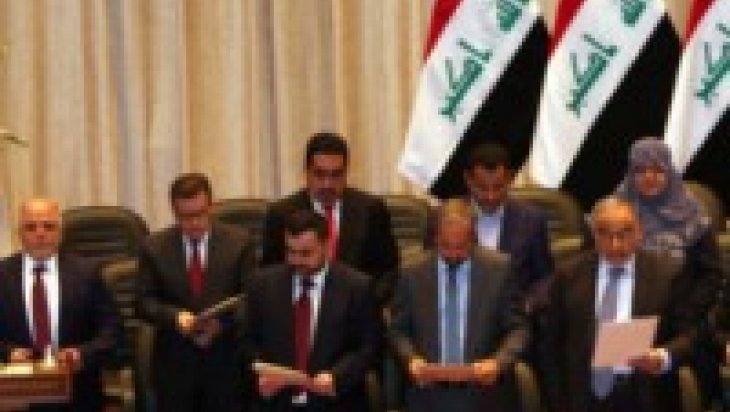 Approximately five months after the April 2014 elections, a new government in Iraq was formed under Haider al Abadi’s Premiership. Regarding the common expectations and previous governments’ experiences, there were numerous rumors claiming that the formation would exceed the constitutional time limit. Despite these rumors, the new government, with participation of 289 lawmakers, obtained a vote of confidence from the Iraqi Parliament on September 8th, right before the constitutional limit. It is noteworthy that the government program received 177 of the votes. Furthermore, Deputy Prime Ministers Saleh al-Mutlaq and Hoshyar Zebari obtained 149 and 164 votes. During the session for other Deputy Prime Minister Bahaa al Araji the counting was cancelled due to the over time, and the sessions for other ministers were held without counting. The fact that Deputy Ministers’ approval took place despite the lack of enough number of votes underlines the sensitive political balance in the country. Additionally, considering the names in the cabinet, it can be stated that it is not fundamentally different than the previous ones; some members of the previous cabinet just changed their seats and stayed in the new cabinet.

Al-Abadi appointed 20 names for 23 member cabinet and stated that he would announce the Minister of Defense for parliament’s vote within a week. In the meantime, the posts of Deputy Prime Minister and Deputy President are appointed. For each position, which has normally 2 posts, 3 names are appointed. Naming parties’ effective leaders for these posts can be seen as a move to consolidate the political balance. Haider al-Abadi had already stated that he will form a balanced government when he took the office. However, it seems that the new government is on a critical balance.

First of all, the failure in appointing ministries of defense and interior affairs can be seen as a bad start for the new government. Considering the fact that the most serious problem of the country is security, the government’s being unable to fill the necessary authority gap, by leaving two related ministries unnamed, harmed the security enterprise during the struggle against ISIS. As it is known, the same problem emerged during the previous administrations and Nouri al Maliki presumed these ministries’ authority by procuration. This led the monopoly of the security enterprise and Maliki’s dominant control. Maliki’s attitude at the time is considered as one of the main reasons for ISIS’ emergence. This attitude also received serious criticism even from some of the Shia groups. For this reason, Abadi’s being quick in forming the establishments related to security will be an important step towards the stability in the country. Furthermore, it is also important that the person for this position should be someone leaning towards political balance without any prominent sectarian or identitiy agenda. For instance, among the potential names for the Interior Ministry, selection of the Badr Corp’s leader Hadi al Amiri, who is quite distinctive with his identity agenda, would seriously damage the delicate balance in the country and lead to further polarization.

Looking at the names in the cabinet, it can be stated the balance in terms of sect and identity was tried to protect, but various people with sectarian identities ended up having seats at the end of the day.  From the Shia, a prominent name of the Sadr Group Deputy Prime Minister Bahaa al Araji, Minister of Oil Adil Abdul-Mehdi from the Islamic Supreme Council of Iraq, Minister of Transportation Bayan Cabir Solak, a Turkman and the Badr Corp’s Northern Regional Leader Minister of Human Rights Mohammed Bahti Beyati were appointed in the cabinet. Additionally, former Prime Minister Nouri al Maliki became the Vice President and a distinguished name for the Islamic Supreme Council of Iraq Humam Hammudi was chosen as Deputy Speaker in the Parliament.

From the Kurds, former Minister of Foreign Affairs Hoshyar Zebari became Deputy Prime Minister. Also, former Deputy Prime Minister Roj Nuri Shawis was appointed as Minister of Finance. Considering the cabinet’s structure one can say that there will be harsh inter-cabinet debates. Sunni ministers’ choosing from Anbar Province can be seen as a move to cool down the sectarian and anti-government tensions from the province. Besides, considering the ISIS strength in Anbar, it is significant to get support from province in the struggle against the group. However, Quteyba Juburi and Ahmed Abdullah al Juburi’s presence in the cabinet is open to ignite new criticism, since these ministers had good relations with Maliki.

Ministers’ eligibility for the positions is noteworthy as well. It seems that a balanced share was considered during the naming of the ministries of health, electric, provinces, and transportation. However, it is possible to say that some changes were experienced for strategic ministries like finance, oil, education, justice, and planning. Although it would be wrong to state that a complete change among groups took place, it is still possible to say that change of ministers is still important. In this regards, changes in the Finance and Oil are attention getting. Nuri Shawis’s becoming the Finance Minister signals that Kurdistan Regional Government (KRG) can relieve regarding its most serious problem; the budget. It is also significant that Adil Abdul-mahdi became the Minister of Oil, who is considered to be more moderate than Hussain al-Shahristani. Apart from his moderate personality, Abdul-mahdi’s good relations with Kurds during his time as the Vice President can be seen as signals of a better negation environment over oil revenues.

Despite all positive comments for government’s formation, Abadi’s government has a lot of problems ahead. Several problems for the government formed by Abadi could be named as; preventing ethnic and sectarian agenda in Iraqi politics, improving state’s infrastructure and institutionalization, preventing corruption, handling the budget sharing, improving people’s welfare, preventing local politics’ negative reflection to domestic politics, and the militia’s uncontrolled arming.

Bilgay Duman | 09.04.2020
Key anti-Daesh/ISIS actors in Iraq since 2014, the Hashd al-Shaabi and Shia militia groups have become the defining forces of politics beyond the...

Bilgay Duman | 17.03.2020
The rocket attacks against the Camp Taji military base in the north of Baghdad, Iraq’s capital city on March 11, claimed the lives of two...

Bilgay Duman | 22.01.2020
Emerging as a controversial actor after ISIS dominated most of the Iraqi territory in 2014, Hashd al-Shaabi and the militia groups that showed up...

Abdennour Toumi | 01.12.2020
In Algeria, the military power structure is a full institution that leads ultimately to the defense minister. Usually, in Algeria, the president...

Navvar Saban | 30.11.2020
Recently, north western Syria witnessed many changes in the positions of control and influence, and these changes were usually linked to changes in...