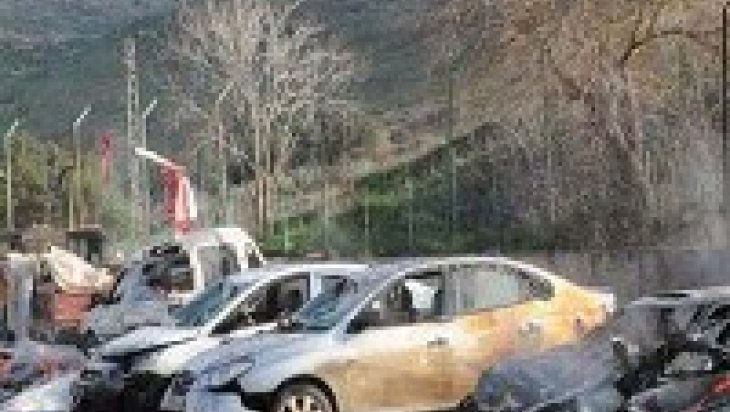 A car blast that took place in the buffer zone between the Cilvegözü and Bab al-Hawa border gates on Feb. 11 has raised many questions.

Even though it might be risky to make a comment before the real intent and perpetrators of the attack become clear, the potential planners and reasons for the attack will be discussed in this brief article.

Above all, the blast is a negative repercussion of the instability, loose controls and authority gap in Syria and the security gap along the Turkish-Syrian border. The loose control along the border zone is not only related to the situation in Syria. There is also a security gap in border control originating from Turkey due to humanitarian aid being sent into Syria.

The Syrian regime is the first suspect that comes to mind as the perpetrator of the attack. In that scenario, Syrian intelligence or a related group wanted to send a message to especially Turkey and the Syrian opposition as well as to all the groups providing aid to the opposition in the area through this attack. The Bashar al-Assad administration and all those supporting the aforesaid regime have implicitly pressured Turkey many times to give up its Syria policy if it doesn’t want the instability in Syria to spread to Turkey. Syrian leader Assad’s statements claiming that Syria is a fault line in the Middle East and it would cause an earthquake in the region if the ground is played with, as well as Iranian authorities’ statements that no one would get the better of the conflict in Syria are implicit warnings that the instability will spread to Turkey. Therefore, the first possibility that comes to mind of the perpetrator and target of the blast is that it was the attempt of actors who are not comfortable with Turkey’s Syrian policy to “punish” Turkey and to open the Syrian policy up for discussion amongst the Turkish public. In that case, it is possible to consider this bomb attack as the last link of recent initiatives to create a terror cycle in Turkey, including the attack by the Revolutionary People’s Liberation Party/Front (DHKP/C) terrorist organization on the US Embassy.

From a local standpoint, on the other hand, the Cilvegözü border gate might be pointed out as an unsafe area and the blast might be aimed at preventing all activities in the area. Because as Foreign Minister Ahmet Davutoğlu also stated, this is a border through which humanitarian aid is delivered to the Syrian people.

Another allegation as to why the Syrian regime carried out the attack is that some members from the executive board of the Syrian National Coalition had held talks with opposition military commanders from Syria in the area shortly before the blast, and those people were the real target. In that case, the Syrian regime must have heard about the meeting. Secondly, that area and the Bab al-Hawa border gate have been seized by the opposition forces. It thus means that Syrian intelligence heard about the meeting in advance, infiltrated the area and carried out the attack. As it stands, it is highly likely that they received some help from the opposition, and this implies a major intelligence gap.

The second possibility and allegation regarding the perpetrator of the attack is the Syrian opposition. In that case, there might be two reasons for the attack. First of all, the opponents might have wanted to further escalate the tension between Turkey and Syria and to put Turkey directly into a conflict with Syria. If not a direct conflict, then Turkey might be expected to increase its support for the opposition.

If the opposition carried out the attack, then the second possibility is related to the meeting held by the Syrian National Coalition members shortly before the attack. Syrian National Coalition head Mouaz al-Khatib stated not long ago that “they are ready for negotiations with the Syrian regime.” This statement not only caused a reaction within the coalition, but basically also among the many armed groups fighting in Syria. Thus, it is possible to consider it as an attack carried out by the pro-violence military opposition in Syria, who are in favor of a collapse of the regime along with all of its components, against the external political opposition that is in favor of negotiations with the Syrian regime. So the internal military opposition that is against negotiations might be trying to send a message to the external political opposition to reconsider their position and ruin the negotiation process. What increases the possibility, even if just by a little, that the attack might have been carried out by the opposition is the fact that the Bab al-Hawa border gate and the neighborhood have been seized by the opposition forces.

Another moot point about the attack is how Turkey should respond. In order to comment on this subject, it is first of all necessary to find out who carried out the attack and clearly determine the target. However, what is more important than the response is to take the possibility of further similar terrorist attacks that aim to destabilize Turkey into consideration. As in the Kurdistan Workers’ Party’s (PKK) or the DHKP/C’s actions, terrorist attacks might be carried out anywhere in Turkey, and provocative actions might also be organized especially in Hatay or in other cities where border control is becoming harder. In event the attack was carried out by the opposition, on the other hand, it is necessary to reconsider Turkey’s relations with the Syrian opposition and to decide where Turkey should stand in the polarization among the internal-external and the pro-/anti-negotiation opposition.