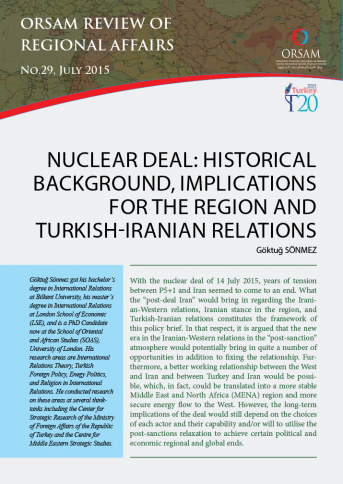 With the nuclear deal of 14 July 2015, years of tension between P5+1 and Iran seemed to come to an end. What the “post-deal Iran” would bring in regarding the Iranian- Western relations, Iranian stance in the region, and Turkish-Iranian relations constitutes the framework of this policy brief. In that respect, it is argued that the new era in the Iranian-Western relations in the “post-sanction” atmosphere would potentially bring in quite a number of opportunities in addition to fixing the relationship. Furthermore, a better working relationship between the West and Iran and between Turkey and Iran would be possible, which, in fact, could be translated into a more stable Middle East and North Africa (MENA) region and more secure energy flow to the West. However, the long-term implications of the deal would still depend on the choices of each actor and their capability and/or will to utilise the post-sanctions relaxation to achieve certain political and economic regional and global ends.