On the Possibility of the Syrian Civil War Spreading to Lebanon 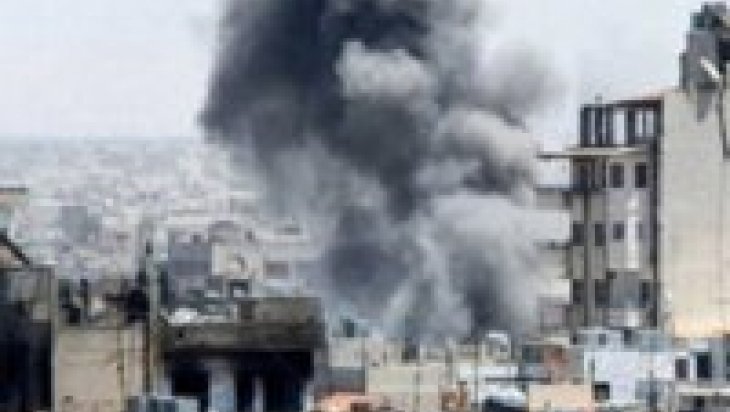 The fact that the sectarian character of the uprising in Syria has come to the forefront has been deepening polarization in the Middle East. This influence has been felt most in Lebanon, where the political structure is based on sensitive sectarian balances.

Lebanon has close relations with Syria in geographic, political and economic terms. So, it is inevitable that Lebanon will be influenced by the government changeover in Syria. Therefore, Lebanese groups are taking a stand by considering the Syria problem as an issue that will shape their social, political and economic future, and they have also been striving to shape the process in Syria in their favor. This situation has an impact on the course of the civil war in Syria and also is causing the conflict to spread into Lebanon.

Meanwhile, Lebanese Sunnis support Syrian opponents in political and social aspects. Tens of thousands of Syrian people fleeing from the military operations of the Syrian army moved to North Lebanon, mainly to Tripoli, a conservative city that is predominantly populated by Sunnis. The vast majority of those fleeing Syria are Sunni Muslims escaping from Homs. Thus, the city is directly affected by the events in Syria. The people in Tripoli have been welcoming and helping the Syrian refugees. Furthermore, in Tripoli, Salafis and the Lebanese Muslim Brotherhood have a certain grassroots. Those movements also support the Syrian opposition and reportedly the Free Syrian Army (FSA).

One of the most important dimensions of the support is arms supply. The aforesaid environment has accelerated the arming process of Salafis in Tripoli.

The first impact of the tension in Syria on Lebanon was observed in Tripoli. In the Jabal Mohsen neighborhood of Tripoli, which is predominantly populated by Sunnis, there are also Arab Alawites. Conflicts have been taking place from time to time between pro-Bashar al-Assad Arab Alawites and the anti-Assad opposition (Sunnis, Salafis) in Jabal Mohsen. In this process, lots of developments that put forward Tripoli’s support for the Syrian opposition have taken place. In the Arab media, there were reports about arms traffic between local Sunni groups in Tripoli and the Syrian opponents. In the reports, the opposition asserted that the easiest way to pass arms to Syria was through Lebanon. There were also reports of FSA militants, openly supported by Lebanese Salafis, who were able to freely bear arms in Akkar and send arms, ammunition and rebels to Syria.

The increasing cooperation and relations between the Syrian opposition and Sunnis from Tripoli, as well as arms trafficking, caused Salafi groups in Tripoli to increasingly take up arms. Thus, this situation has increased the potential of conflicts between the Arab Alawite minority and Sunnis. With the thousands of opposition Syrians fleeing from Homs to Tripoli, the circumstances for close combat began to appear. In early June, conflicts between Sunnis and Arab Alawites in Tripoli were ignited once again, with 12 people killed. During the conflicts between the parties in August, 10 were killed. The sectarian polarization in the country was further deepened in October. A blast occurred in Beirut, causing major destruction, and pro-Hariri and anti-Assad Chief of Intelligence Visam Al Hasan was killed, along with seven other people. Hariri asserted that Assad was to blame for the blast. In December six people were killed in conflicts in Tripoli.

The aforementioned conflicts showed that the Sunni armed groups, comprising hundreds of members, had become an important military force. Another point that came to the forefront was the fact that North Lebanon had become an active military base to support the opposition movement in Syria. Salafis as well as the Future Movement, supported by Lebanese Sunnis and allied with Salafis, were influential not only in Tripoli but also in other cities of Lebanon. Countries such as Saudi Arabia and Qatar supported both movements to balance the influence of Hezbollah and Iran.

The strongest allegation that appeared in the press in December was that Lebanese Sunnis were directly involved in the Syrian civil war. Accordingly, Okab Sakr, the Future Movement member of parliament, was supporting the rebels in Syria by providing them with arms via Turkey on behalf of Hariri, the leader of the movement. In addition, he personally managed the conflicts in Syria from a series of “operating rooms” in Lebanon and Turkey. Not long after the reports, Syrian official news agency SANA stated that the Damascus regime had issued a warrant for the arrest of Hariri, accused of having provided rebels with arms to topple Assad for more than 20 months -- thus the Damascus public prosecutor issued a warrant for the arrest of both Hariri and Sakr.

It was seen that while Lebanese Sunnis provided indirect support, Shiites and, in particular, Hezbollah, provided direct support for the Syrian regime. There were plenty of allegations about Hezbollah troops fighting against the opposition forces along with the Syrian army during the civil war. However, there was no concrete evidence for this. In February, the FSA made a statement accusing Hezbollah militants of opening fire across the border. “Hezbollah bombarded villages in the neighborhood of Kuseyr from Lebanese territories. We cannot let Hezbollah continue to exploit the sovereignty of Lebanon to carry out attacks on Syrian territories,” said FSA Chief of Staff Gen. Salim Idris. “If Hezbollah does not give up on carrying out a military intervention in Syria along with the Syrian regime, we will carry out operations in southern Beirut,” said another FSA official.

There were reports of Hezbollah militants taking part in operations carried out by the Syrian army in Kuseyr. However, with the large-scale operation launched by the Syrian army in Kuseyr in early May, the intervention of Hezbollah in the civil war took on a different dimension. The military troops of the Syrian regime’s army supported by Hezbollah militants entered the town in different groups. Also Hasan Nasrallah, leader of Hezbollah, admitted that Hezbollah had gotten involved in the civil war. “We are ready to send thousands of members to the region to fight against radical groups in Syria. As I promised in the early stages of the war against Israel in July 2006, I promise you victory again. We will fight and win this war,” he said.

Not long after this statement, missile attacks were launched in southern Beirut on the Shiyah neighborhood where Hezbollah militants were deployed, and on a military base located in eastern Lebanon. The clear stance of Hezbollah further reinforced the possibility of the Syrian civil war spreading to Lebanon. Different Syrian opposition groups made statements about Hezbollah becoming their direct target. Another development about the direct involvement of Hezbollah, namely Iran, in the process concerned the militia force alleged to be composed of some 50,000 militants called the “National Defense Force.” The militia force that is alleged to have been provided with training, finance and ammunition by Iran and Hezbollah was entirely made up of Syrian Arab Alawites. It was reported in the media that this new militia force played a role in conflicts in Kuseyr. Hezbollah’s involvement in the civil war is critical because the Syrian army is completely organized to fight against Israel and it cannot have the edge over the Syrian opposition, which fights like street fighters. However, the experience of Hezbollah in street fighting and their forming a new militia force with the National Defense Force caused the regime to achieve major successes against the opposition forces.

As mentioned above, the Syrian civil war has currently spread to Lebanon. The impact has been limited to certain districts in the Beqaa Valley, Tripoli, southern Beirut and Sidon. However, the two developments show that the conflict will spread to wider areas and become more violent. The first is Hezbollah’s involvement in Syria’s civil war, as well as the increasing military preparations of Sunni Salafi groups in Tripoli and Sidon. Although their impact is limited, some groups related to al-Qaeda might spread their activity to Lebanon.

Hence, Lebanon has become a powder keg. The slightest spark might ignite a large-scale conflict before long. Hezbollah’s involvement in the war also poses the risk of regionalization of the conflict. Hezbollah losing its power in Syria makes it open to an Israeli attack. However, Hezbollah achieving great gains along with the Syrian regime might increase the perceptions of threat. At a certain point this situation might bring forward Israel’s involvement in the war.