Politics in the KRG Towards the 2018 Election 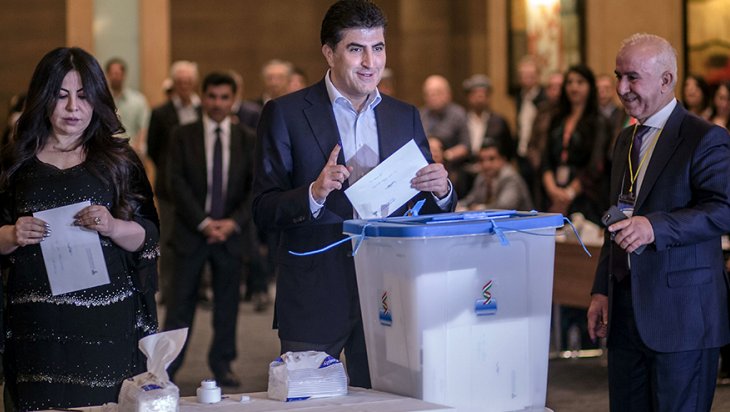 With the beginning of the process regarding the independence referendum held in the Iraqi Kurdish Regional Government (KRG) on September 25th 2017, domestic political dynamics in the KRG have changed. Political balances have shifted following the military operation of the Iraqi central government, which saw it regain control of territories disputed since 2003, especially Kirkuk, but not Irbil, Sulaymaniyah and Duhok. The operation began on October 16th 2017 and allegedly included a deal with Jalal Talabani’s party PUK. While Mesoud Barzani’s party KDP became quitter in domestic politics, it also decided not to contest the election planned for May 12th in Kirkuk and other disputed areas. With this decision, the KDP seems to have taken a step back from its traditional expansionism and seems to be trying to protect its domestic base in the KRG. It would not be wrong to claim that the KDP intends to take steps concerning domestic politics and try to establish administrative stability within the KRG, protect its status within Iraq and try to mitigate the tough external atmosphere that emerged after the independence referendum.

On the other hand, the emerging factor in KRG domestic politics is the Kurdish political movement based in Sulaymaniyah.  The resolution of the leadership crisis which enveloped the PUK after Jalal Talabani fell ill in 2012 has had important consequences for KRG domestic politics. With the PUK losing votes in the 2013 elections and being left behind in the process of establishing a government has disrupted the strategic alliance between the KDP and the PUK. With ISIS gaining control over a part of Iraq in 2014 and threatening the border of the KRG, the KRG’s attention shifted from domestic political problems to fighting ISIS. This led to a postponement of political issues within the KRG. With the rapid advance against ISIS after the second half of 2017 and the resulting stability in territory controlled by the KRG, domestic issues came back on the agenda. As well as the independence referendum, the peak of the economic crisis within the KRG has stimulated domestic debate in the KRG. It was under these circumstances that problems emerged within the PUK due to controversy over the referendum, the Iraqi central government coming to an agreement with the PUK (or at least with a group within the PUK) for the Kirkuk operation and the death of Jalal Talabani. These problems have led to a new power conflict centred on Sulaymaniyah.  Berham Salih, Deputy Secretary-General of the PUK leads a movement called Coalition for Democracy and Justice, while Shahsuvar Abdulvahit, owner of the NRT network which is one of the most influential media organisations in the KRG and directs harsh criticism at the government, leads the New Generation Movement. A diverging political structure has emerged before the 2018 Iraqi elections which has led to the Kurdish political movement in Iraq contesting an election as fragmented as it has never been.

The Kurdish Political Movement in the Run-Up to Iraqi Election

One of the most striking developments to occur before the election is the emergence of the group called Coalition for Democracy and Justice, which was founded by Berham Salih and grew to include the Islamic Congregation of Kurdistan and the Goran Movement in an electoral alliance. It was known that Berham Salih was in the running for the leadership of the PUK and his exclusion from the party has led to him forming the new movement. It appears that Berham Salih is trying to attract the pro-Western and liberal group within the PUK, to distance himself from the cumbersome PUK structure controlled by the Talabani family and therefore to attract dissidents from the party. Berham Salih is also trying to get the support of a part of the Islamist wing to try and win support of the conservative Kurdish base. There are two important figures other than Berham Salih within the Democracy and Justice Coalition. One of them is Aram Kadir, who is a respected politician within the Nahze Movement that is known as a sub-branch of Komal (the Islamic Congregation of Kurdistan). When the Nahze Movement merged with the Bizutneve (Kurdish Islamic Movement), Kadir was in the executive committee. He later left his party and joined Komal under the leadership of Ali Bapir. Aram Kadir is seen as the main factor behind the separation of Bizutneve and Komal. The second important figure is Mohammed Rauf. He first emerged as a significant leader within the Nahze Movement in 1991. He later held office within the information department of Yekgirtu (Islamic Union of Kurdistan). His visibility increased during this assignment. He later ran for the secretariat-general of Komal, was not elected and withdrew from politics. He seems to be looking to re-establish his influence in the Kurdish political movement at the side of Berham Salih. Mohammed Rauf’s cooperation with Berham Salih is expected to form a centre of attraction for those who have become disappointed with and distanced from the ossified Kurdish Islamist political movements due to Rauf’s influence on the Islamist base.

Through the course of these developments, the PUK, under the leadership of the Talabani family, has tried to maintain its unity.  The PUK held a congress in March 2018 and formed a new administrative mechanism to rebuild the party. Following the establishment of the new political movement by Berham Salih, the PUK is trying to remain a unitary force.  The PUK will run in the 2018 elections alone and it has lost its standing with the Kurdish people due to the Talabani family striking a deal with Baghdad before the Iraqi central government’s operation to Kirkuk and pulling back their peshmerga forces from the city. Reaction against the PUK has also increased due to its attached armed forces treating the people harshly during the Sulaymaniyah-based protests against the administrative failures of the KRG and the economic crisis.   Therefore the PUK is the party that attaches the greatest importance to the 2018 election, as it will be a test of its strength and influence.

Having faced a lot of domestic and external pressure due to developments following the independence referendum, Mesoud Barzani’s KDP has closed ranks and is begging to follow a low-risk and reconciliatory politics. The KDP has exhibited a softer attitude on the control of border crossings, management of airports and the budget with the central government in Baghdad and has remained quiet in domestic KRG politics, avoiding intervening and taking the initiative.  While the KDP will run in the 2018 election alone, this time it will not run candidates in disputed territories and Kirkuk. This does not mean that the KDP is withdrawing from politics.  It has been engaged in a rapprochement with Yekgirtu, with which it shares a political base and has more attitudes in common compared to other parties.  Rumour has it that despite its decision not to run candidates in Kirkuk and disputed territories, the KDP will put forward candidates under the Yekgirtu list or will support Yekgirtu candidates. The KDP does not want a political vacuum to emerge in Duhok and Irbil, which are its own zones of influence. Berham Salih’s Democracy and Justice Alliance approaching the position of a centre party and attracting the people of Irbil leads to Mesound Barzani to take steps towards maintaining his power and limiting the influence of other political actors.

In conclusion, KRG domestic politics has been reshaped by the referendum process. The KDP’s lower profile and isolation following the referendum, separation with the PUK, the new political movements founded by Berham Salih and Shahsuvar Abdulvahit are all signs of shifting balances within KRG politics. The new situation that has arisen within Kurdish politics before the 2018 elections will have little effect on the Iraqi general election, but will leave its mark on the KRG parliamentary election planned for late 2018.  Therefore, the results of the 2018 Iraqi parliamentary election will be a test for domestic politics of the KRG.

This article has been published in Diplomatic Observer's 76th issue in May 2018.