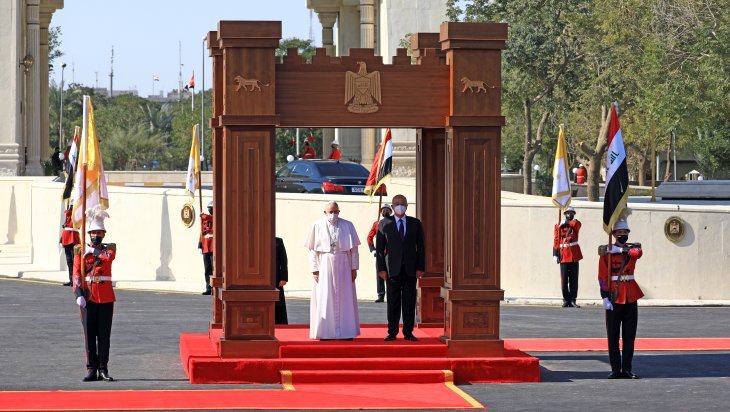 Twenty-one years after the prospective pilgrimage visit by Pope John Paul II to the Iraqi city of Ur in 2000 was canceled by Saddam Hussein, Pope Francis, the spiritual leader of the Catholics, visited Iraq on 5 March 2021, the first papal visit to the country. In fact, Pope Francis intended to make an earlier visit yet he had to postpone this due to the general conditions in Iraq and the following global coronavirus pandemic. The security issues came up again just before the visit and according to some claim, several cardinals pressured the Pope to cancel the visit. Yet, Pope Francis has demonstrated his will and carried on with the visit while a special delegation from the Vatican arrived in Iraq for talks and preparations ahead of the visit.

The Iraqi officials received the four-day historical visit very well and boosted the security precautions to the maximum level. The militia group known as Saraya Awliya al-Dam, which has assumed responsibility for the February attacks in Arbil, declared that they would cease their attacks in honor of the visit. The places and the routes of the visit were elaborately restored, cleaned and adorned with peaceful messages. Approximately twenty thousand people followed the papal plane live online during the flight, which landed around 2.00 pm at Baghdad Airport. Iraqi Prime Minister Mustafa al-Kadhimi greeted Pope Francis on the airport apron while the Iraqi teens wearing different outfits representing the country’s cultural variety performed traditional dances. After his meeting at the airport with Prime Minister al-Kadhimi, the Pope was received in an official ceremony by President Barham Salih in the Presidential Palace. During the ceremony Pope Francis appeared before the cameras and made his first statements. Remarking that he came to Iraq for the purpose of pilgrimage, he stated that Iraq suffered from war, terrorism and sectarian conflict for decades. He also underlined that he prayed for Iraq throughout the years and there is no place for extremism, violence and intolerance in Iraq’s common future, which would signify the unity and fraternity of all religious, ethnic and cultural elements.

After Pope Francis met with some Iraqi politicians and civil society leaders in the Presidential Palace, he concluded the first day by visiting the Sayidat al-Najat (Our Lady of Salvation) Syriac Church and meeting with local clergymen. On October 31, 2010 during a Sunday mass in the Sayidat al-Najat Church a terrorist attack committed by the Iraqi al-Qaeda killed 58 people. This attack was a turning point for many Iraqi Christians and convinced them to leave Iraq. Therefore, the Pope preferred places with symbolic meanings during his visit.

Pope Francis traveled to Najaf on the second day of his visit and had a 50-minute conversation with Grand Ayatollah Ali al-Sistani. The meeting between the two spiritual leaders was the most difficult event during the planning process of the visit. It has been claimed that Ayatollah al-Sistani, who is 90 years old and unable to leave Najaf due to medical reasons, acts in accordance with his principle of no meeting with foreign leaders and could only accept the Pope in his own house. Therefore, Pope Francis visited al-Sistani in his house in Najaf. The two leaders have made numerous gestures during their meeting. The Pope took off his shoes while entering al-Sistani’s humble residence and, in response, Ayatollah al-Sistani received him standing up. During the meeting, Ayatollah al-Sistani underlined the rights of Iraqi Christians to live as equal citizens in peace and security while Pope Francis expressed his gratitude to al-Sistani for raising his voice in defense of the defenseless and suffering people living under difficult conditions. The end of the meeting was widely applauded on social media when al-Sistani stood up again and the two leaders held hands while bidding farewells.

Traveling to the ancient city of Ur, the birthplace of the Prophet Abraham, Pope Francis met with community leaders from various religions and cultures such as Muslims, Christians, Yazidis and Bahais, and held an interfaith prayer ceremony. During his speech in Ur, the Pope declared that he rejects any terrorist activities in the name of religion and condemned extremism, violence and hostility as betrayal of the religion. Remarking that the faith began in Ur, he called for strengthening the fraternity among different religions and cultures as the grandchildren of the Prophet Abraham. He also listened to the recitation of the Holy Quran including the verses from Surah Ibrahim. The government of Iraq declared that March 6 will be celebrated as the day of ‘National Tolerance and Coexistence’ in honor of the meeting between Pope Francis and Ayatollah Ali al-Sistani, and the interfaith meeting in Ur.

Returning to Baghdad from the governorate of Dhi Qar, Pope Francis concluded the second day of his visit by holding a ceremony in the church of Mar Yousef. On the third day of the visit, Pope Francis arrived at the Arbil Airport around 8.30 in the morning. He was greeted by local teenagers in traditional outfits holding olive branches and chanting hymns in the Aramaic language. President of the Iraqi Kurdish Regional Administration Nechirvan Barzani, Prime Minister Masrour Barzani, Deputy Prime Minister Qubat Talabani and several ministers were also present in the welcoming ceremony. It has been claimed that Mesud Barzani attended the meeting in the VIP section of the airport. Traveling to Mosul by helicopter after his brief meetings in the Arbil Airport, Pope Francis held a rite in the garden al-Tahira church, which was devastated by ISIS in 2014. There he performed prayers for those who were massacred by ISIS. Stating that the exodus of the Iraqi Christians and other ethnocultural elements deform the social fabric of Iraq, Pope Francis remarked that brotherhood, hope and peace is stronger than conflict, hatred and war. After the rite at the al-Tahira church, Pope went to the al-Hamdaniya (Qaraqush) district known for its significant Christian population. He held a rite at the al-Tahrir al-Qubra Church, which was destroyed by ISIS in 2014 and later repaired. Returning to Arbil for his last mass event of the four-day tour, Pope Francis preached to more than ten thousand people attending the ceremony in the Franso Hariri stadium. Stating that Iraq will always have a place in his heart, the Pope concluded his speech and traveled to Baghdad for his return flight to Rome.

It is remarkable that Pope Francis traveled to five different cities in three days calling for peace and brotherhood despite his age and walking difficulties caused by sciatica. His visit concentrated on encouraging the Christian minority who suffered from ISIS terrorism and reducing population numbers. The Pope stressed the fraternity of the ethnic and religious elements in Iraq despite all past conflicts, and underlined that the Christian minority should remain in Iraq and cooperate with their Iraqi brethren. Furthermore, the fact that there were no security problems during the Pope’s visit has boosted Iraq’s prestige in the international community. Considering the nature of the visit it is also remarkable that the Pope visited five different cities, appeared on the streets and held a rite in a stadium in Arbil.

It is without any doubt that the most interesting part of the visit is the meeting between Pope Francis and Ayatollah Ali al-Sistani, since it is the first meeting in history where a Pope met with a Shiite marji' taqlīd authority and called for peace. The meeting of the two great leaders, who are known for their dialogue and peace messages and for their rejection of religion as a motivation for violence, is symbolic on its own. The visit has also confirmed that Ayatollah al-Sistani and Najaf are acknowledged by the international community as Shiite authorities. The importance of Najaf in the Shiite world has also been underlined. As it is well known that, the competition between Najaf and Qom (Iran) as the two centers of the Shiite Islam is becoming more intense recently. Najaf seeks to retain the Shiite thought patterns currently under the dominance of Iraq. This situation resonates negatively in the Iraqi politics as well. Therefore, some Iran-backed groups have implicitly criticized the Pope’s visit. It is remarkable in this context that Prime Minister al-Kadhimi stresses ‘Iraq’s sovereignty’ in his rhetoric at every opportunity since the beginning of his term. Considering that general elections will be held in Iraq in the period ahead, it is yet to be seen whether the visit will bring along a political advantage for al-Kadhimi. Recently, al-Kadhimi works on serious international efforts thanks to the US and Western support. Iraq seeks to develop effective dialogue and cooperation mechanisms in the Middle East with regional powers such as Turkey and Saudi Arabia. Furthermore, the reinforcement of the NATO training mission in Iraq is another aspect of Iraq’s international efforts. At that point, it has been claimed that the USA seeks burden sharing responsibilities with international partners. It would not be wrong to suggest that the Papal visit is in support of these US policies.