‘Puss-in-corner’ on the Northern Syria Front 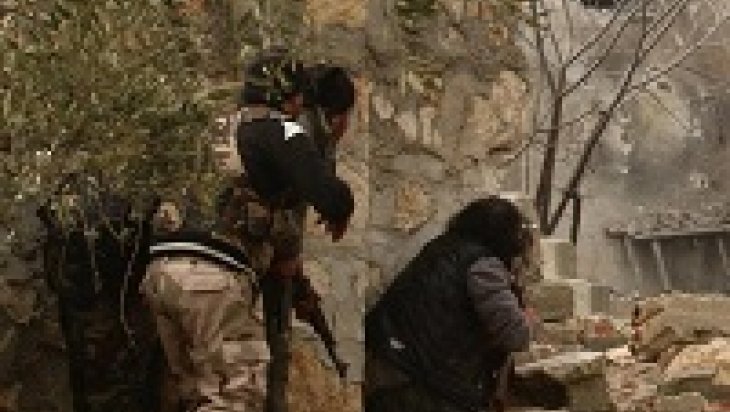 One of the efficient opposition groups of the northern front in Syria, the Islamic Front outclassed ISIS in the rural area between the city center of Aleppo and Turkey’s border at the beginning of 2014. ISIS that had to retreat from the rural areas in northern Aleppo focused on al-Raqqah and took almost full control of the city. After recovery in al-Raqqah, ISIS launched intense attacks in the rural areas of northern Aleppo on 27 January 2014 and took control of the line between Azaz and Jarabulus. ISIS reclaimed important settlements like Jarabulus and Manbij during these operations. The Islamic Front and Turkmen units controlled Azaz-Jarabulus line in the pre-ISIS period and they had to retreat to Cobanbey, a Turkmen village opposite Elbeyli district of Kilis. Turkmens and the Islamic Front that resisted ISIS in Cobanbey for a while abandoned Cobanbey at the beginning of February and had to pass to Turkey.

ISIS has continued to control the rural areas of northern Aleppo known as Azaz-Jarabulus line since January 2014. This line is of utter importance for several regional and nonregional actors, especially Turkey. Azaz-Jarabulus line has a strategic importance for Turkey to maintain its geographic connection with Aleppo, to support Syrian opposition in their efforts to persuade Assad regime of political negotiations and to prevent PKK/YPG from creating an integrative geography under their control. It is also important due to Turkmen presence in the region and Aleppo’s role as a passageway of the migration wave. Turkey has long proposed establishing a safe zone on Azaz-Jarabulus line for mentioned reasons. The line is important for ISIS since this is the only connection point of the organization with the outer world. Although Turkey takes intense security measures, a significant amount of foreign fighters find a way around the border Gates in Jarabulus and Cobanbey. A large number of ISIS fighters are arrested by Turkish security forces on this line. The USA cooperates with YPG in order to remove ISIS from this region for the same reason. The region between Azaz and Jarabulus is critical for YPG since its goal is to form a “Federation” which has administrative and geographic integrity in northern Syria. YPG aims to eliminate the geographic disconnection between Afrin and Kobani  if it captures this area. Russia-backed Assad forces also aimed to reach this area until recently. Syrian army and foreign militias that succeeded to build a corridor from the city center of Aleppo to Nubul and al-Zahra thought about advancing to Azaz through Tell Rifaat. Therefore, they planned to cut the connection between Turkey and Syrian opposition. However, YPG acted quickly to capture Tell Rifaat and forestalled the move of the regime.

ISIS poses a common threat to all actors on Azaz-Jarabulus line and all actors agree that ISIS should be cleared away from this area. The major problem is which actors will fill the gap that ISIS leaves. This issue also underlies the tension recently felt between the USA and Turkey. The USA demands that Azaz-Jarabulus line should be controlled by YPG-led Syrian Democratic Forces. Turkey redlined the advancement of YPG that it considers as Syrian branch of PKK, on this line. Therefore, the USA tries to find a common ground between Turkey, its ally in the region and YPG.

YPG initially tried to advance towards Azaz through Afrin and captured the air base in Menagh with Russia’s air support. YPG has stopped advancing to Azaz through Afrin for now as a result of Turkey’s military response and possible indoctrinations of the USA. Afterwards, YPG started to advance to Manbij through Tishrin Dam in coordination with the USA. The USA intensely bombarded ISIS targets in and around Manbij in March. YPG and the USA try to establish a connection between Afrin and Kobanî by advancing through the internal parts out of Turkey’s range. If Manbij is reclaimed from ISIS, it will be already much easier to clear ISIS away from the surrounding settlements since Manbij is one of the biggest settlements in that region and among the places where ISIS has its greatest influence. TEV-DEM (Movement for a Democratic Society) under PYD-YPG control also started political preparations for the post-ISIS period. Such structures as “Manbij Military Council and Shehba Assembly” were formed in order to prevent Turkey’s reactions by alleging that local instruments are involved. [1] YPG uses this tactics both to find local support in this geography where Kurds constitute a minority and to forestall the allegations that a “Kurdish corridor” was built in the region. These “roof structures” will be probably used as an argument that will strengthen the hand of the USA so that it can support YPG.

In parallel with all these developments, Syrian opposition attempted to advance towards the regions under ISIS control through Azaz on Turkey-Syria border line. In the last few weeks, Mutasim Brigade, Feilak al-Sham and Ahrar ash-Sham have made important progress on the line together with Turkmen-led Sultan Murad Division. The villages of Halfetli, Tel Battal, Al-Ahmadiyah, Kamaliyah, Tel Shair, Qasajik, Dodian, Margel, Hazel, Yan Yaban and Shahin farms were initially reclaimed from ISIS.   Afterwards Cobanbey (al Rai), which is one of the largest settlements and where there is an intense Turkmen population, was taken back from ISIS. Cobanbey was an important loss for ISIS since Turkish security forces catch the highest number of ISIS members at the border gate and in its vicinity. The opposition even moved beyond Cobanbey and approached Jarabulus, its ultimate goal. Turkey’s artillery support from outside the border to Syrian opposition also played an important role in these operations. However, these victories weren’t permanent for that time and ISIS counterattacked immediately after the opposition advanced and reclaimed some settlements including Cobanbey. After the first loss, the opposition that reclaimed Dalhah and Harjeleh continues its operations to take Cobanbey back. It is first planned to capture Tathumus on the way to Tukhali and Cobanbey in the south.

The consequences of the conflicts between ISIS and Syrian opposition led by Sultan Murad Division may have impacts on the issues like the new order of northern Syria, the power of ISIS and the future of Syrian Turkmens.

If ISIS defeats the opposition and the latter cannot advance to Jarabulus, the following results may come out in the medium and long term:

-  The USA will have a stronger hand in the rivalry with Turkey on the issue of order in northern Syria in the post-ISIS period. The USA will defend that Syrian opposition is insufficient in the face of ISIS. It will play its important trump to have Turkey cornered so that it accepts that YPG is the only option to clear ISIS away from Azaz-Jarabulus line. Therefore, YPG may easily provide geographic integrity in northern Syria. This will be a risk factor for Turkey-US relations.

- Maintenance of connection with Aleppo that Turkey attaches utter importance may be at risk. The oppression of ISIS or YPG would increase on Azaz-Mare line under the control of the opposition and the latter may lose this region.

- It is expected that al-Assad regime will launch an operation in Aleppo with Russian and Iranian support. The failure of the opposition on Azaz-Jarabulus line may strengthen the hand of the regime in Aleppo war.

- Turkmen geography may completely disappear in Syria. Bayir-Bucak region in Lathkia where there is an intense Turkmen population, is under the control of al-Assad regime and Turkmens living here were forced to migration. Turkmen regions in Homs were also captured by the regime and Turkmen settlements were destroyed so that no one could return. The highest Turkmen population in Syria is in Aleppo, where they have the largest geography. However, Turkmens in Aleppo have also been under ISIS invasion since 2014. If Aleppo Turkmens who are intensely centered on Azaz-Jarabulus line cannot defeat ISIS, they may have to live under the control of such external actors as ISIS and YPG rather than local powers. Aleppo Turkmens, a part of whom has already migrated to Turkey, may be subject to forced migration.

- There would be no possibility that Turkey could establish a de-facto safe zone on Azaz-Jarabulus line.

- New mass migrations may take place to Turkey and it would be more difficult to receive these migration waves in Syria.

The success of Syrian opposition will result oppositely. If Syrian opposition captures Azaz-Jarabulus line, it will first enable Turkey to make fewer efforts to ensure border security. Transit of foreign fighters bilaterally between Turkey and Syria will be combatted more easily. ISIS attacks in the settlements on Turkish border will be forestalled. As Turkey will consider the attacks to its allies in Syria as an attack to itself, YPG will have lower chance of advancing on Azaz-Jarabulus line. Turkey’s connection with Aleppo and Syrian opposition will be ensured.

[1] It is alleged that Turkmens and Arabs are also in this structure. It was stated that Syrian Democratic Forces (SDF) included Turkmens as well. However, Seljuq Brigade that is claimed to fight on the side of SDF actually represents only one person. Talal Silo, former commander of Seljuq Brigade, joined SDF and assumed the spokesmanship of this group. Apart from this, there is no Turkmen fighter in SDF. However, Syrian Turkmen Assembly, the political representative of Syrian Turkmens and all Turkmen armed units that fight ISIS in the battlefield show strong reactions to YPG presence on Azaz-Jarabulus line.