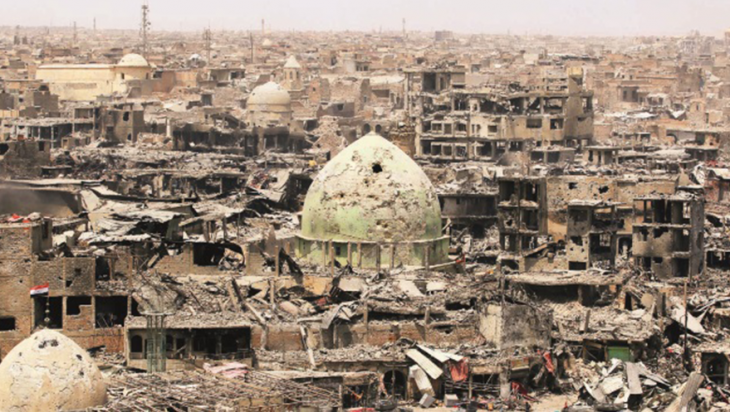 On October 17, 2016 Iraqi security forces, along with the International Coalition Against DAESH Forces, launched an operation to reclaim one of the strongholds of the terrorist organization in Iraq, Mosul where DAESH leader Abu Bakr al-Baghdadi had proclaimed a “caliphate”. The operation officially came to an end on July 9, 2017 with Iraqi Prime Minister Haider al-Abadi's visit to the city and his declaration of victory. Despite some attacks from DAESH and on-going clashes, Iraqi security forces has taken hold of the city.

The next stage is recapturing the rest of the Nineveh Province from DAESH, principally Talafar in the southeastern desert and securing the Syrian border and then moving towards Al-Qa'im, Rutba, Heet cities of Anbar Province, and Al-Hawija of Kirkuk Province. This has been an important step to clear Iraq from DAESH however, the actors who wish to be politically and administratively influential in post-DAESH Iraq are still in a war of authority. At this point, Iraq's future will be shaped by where Shias, Sunnis, Kurds, and Turkmens will stand in the structure of politics and the society.

The Winners of the Fight against DAESH

During the fight against DAESH primarly two actors became prominent and gained favorable positions. DAESH's capture of Sunni populated areas provided a rise to Kurds and Shias. The forces of the Iraqi central government were powerless against DAESH and retrieved from many regions. Kurdish peshmerga and Shia militias aided Iraqi security forces on many advances, obtaining political, military and administrative acquisitions along the way. Kurds has become the dominant force in post-2003 disputed territories such as Kirkuk, Tel Keppe where minorities live to the east of Mosul, Hamdaniyah, Aqrah, Bartella, Bashiqa, Sinjar and also Khanaqin and Jalawla in Diyala Province and Tuz Khurmatu in Saladin Province.

Hence, excluding Erbil, Sulaymaniyah and Dohuk, Kurds has accomplished to acquire all the land they aspired to after 2003. In fact, the current situation in those lands is beyond simply controlling them. In accordance with the notice from Kirkuk's Kurdish Governor Necmettin Kerim, Kirkuk Provincial Council agreed on raising the flag of Kurdistan Regional Government (KRG) on public buildings. Governor Kerim's decision on including Kirkuk in the KRG's independence referendum, set to September 25 of this year, is also important as it suggests a strong incentive towards Kirkuk becoming a part of KRG.

Shia militias has also resurfaced as an influential actor of the region with the fight against DAESH. They gathered after the fatwa from Ayatollah Ali Sistani, regarded as the main religious leader of Iraqi Shias, and currently they are a propelling figure of the fight against DAESH. Currently the power of Shia militias goes beyond the authority of Iraqi central government therefore, their political and administrative influence expands to almost all of Iraq. The militias have been evolving into a fractious force as they have been following a different agenda than the government's and prompting concern over their actions in the territories they control. Thus, the Iraqi central government has attempted to legalize and gather them under Hashd al-Shaabi (Popular Mobilization Forces). Yet, Shia militias other than Hashd al-Shaabi still exist and act according to their own plans despite the efforts from the government. This is a grave danger for the Iraqi central government since these groups, which do not adhere to the official authority and hierarchy, could pave the way to new conflicts in the reclaimed territories. In fact, there have been some occasions, primarily in Tuz Khurmatu and Jalawla, that conflicts arose between militias and the Peshmerga. In the future, there is high chance of an encounter between Hashd al-Shaabi and the Peshmerga during the operations to seize Telafar and Al-Hawija from DAESH.

On top of that different conflicts may emerge in the territories controlled by Hashd al-Shaabi and other Shia militias or in the territories both of these forces assist to the Iraqi security forces.  These territories include Tikrit, Diyala and Anbar and have mostly Sunni people as inhabitants. Even though these Iraqi provinces are retaken from DAESH their former citizens struggle to come back. That applies to recently reclaimed Mosul, as well. According to some news from the region these groups, principally the militias, do not allow people to return and have disrupted the demographics in the territories under their authority. This creates an impression that population is intentionally being modified. If the government of Iraq could not maintain the demographics of the reclaimed territories, some groups may drift into radical inclinations. This would not only increase the chances of a conflict but also prompt the development of terrorist organizations similar to DAESH since these radical groups benefit from the lack of authority that conflicts create. In fact, experts raise concers about the fact that DAESH has started a process of becoming more similar to Al-Qaeda, carrying out more mobile attacks rather than attempting to control territories. PKK and other associated terrorist organizations seek to take advantage of this authority deficiency, similar to their endeavors in Syria, and attempt to get hold of some territories in Iraq such as Sinjar, Kirkuk and Tuz Khurmatu.

All these conflicts have their most harmful impacts on Sunnis and the Turkmens. Sunnis have already become the scapegoat of the region due to DAESH. They have been subjects of oppression, excluded from the administration of the country and even though some Sunni groups backed DAESH, it is fair to say they are the victims of a collective punishment.

On the other hand, the Turkmens who live around a line parralel to Baghdad from the northwest to southeast have turned into the easiest targets in Iraq.

Most of the battles against DAESH took place in the Turkmen territories therefore, they found themselves in the heart of the conflict. There are ongoing battles to establish dominance after DAESH in some Turkmen territories such as Talafar, Tuz Khurmatu, Kirkuk and Jalawla. During those battles for dominance the Turkmen territories face the risk of a multilateral conflict. Apart from the fight against DAESH, rising hostility between the Peshmerga and Shia militias, and also between KRG and Iraqi central government, and re-emerged sectarian tensions exacerbate the issue for the already divided Turkmens.

Along with a risk of multilateral conflict, there is also a risk of internal conflicts in Iraq, as well. Especially, Hashd al-Shaabi and other Shia militias have generated enmity in Iraqi people. Eventually, Shia militias may also clash among themselves. That conflict would be between Shia militias supported by Iran and the ones who prioritize their Iraqi national identity. Furthermore, a portion of the Shia population and even the Shia politicians in Iraq oppose militias and their raising powers because they prompt sectarianism.  Hence the disagreements in ruling Dawa Party has become increasingly more apparent.  Another indicator of growing concerns over sectarianism occurred when Ammar al-Hakim, his father Abdul Aziz al-Hakim was the founder and president of one of the oldest and most prevalent Shia parties Islamic Supreme Council of Iraq, resigned from his party and established a new one claiming to "include all voices of Iraq". Therefore it is a valid assumption that the post-DAESH period in Iraq generated profound divisions among Shias.

The disarray among Sunnis continues. After 2003, there has not been an organization capable of uniting them under a single roof and later, DAESH aggravated the division among them. Some other organizations radicalized along with DAESH causing great discomfort for Iraqi Sunnis.

When it comes to Kurds, they find it challenging to act in harmony due to vague and disarranged politics of KRG. Mesut Barzani made a move to enhance his power in KRG with the decision of holding an independence referendum however, he faced an unexpected amount of backlash. Barzani was able to neither ensure foreign support nor completely steer KRG's internal politics to this objective. As the rivalry between KDP and PUK goes on, it seems Gorran and other Islamist parties developed an advance attitude to the current state of KRG politics.

On the other hand, the Turkmens, the most vulnerable group in Iraqi society, have been struggling to maintain their identities and existence. While the Turkmens, who DAESH harmed the most, are seeking to return their reclaimed territories, a major Turkmen city, Talafar, is still to be liberated. In Kirkuk, Turkmens are in a battle to exist against KRG and other Kurdish groups, and in Diyala and Saladin they endeavor to live amongst all the conflict.

Hence, it is plausible to conclude that contrary to all the expectations, the fight against DAESH has intensified the conflicts and divisions in Iraq. DAESH on its own is enough of a reason for conflicts however, it is likely to hear news from Iraq about new conflicts in different territories until a new order is restrored. Even though Iraqi Prime Minister Haider al-Abadi stated that there will not be any elections until Iraq is entirely cleared from Deash, 2018 will be a year of elections in the country and everybody is preparing for it. The stability among different sects and ethnic groups should be restored. Otherwise, considering how much security and politics are closely associated, the main danger for Iraq in the future will be turning into a fractious country where different political and military groups prompting more conflicts.