Russia keeps the post of Syrian Chief of the General Staff 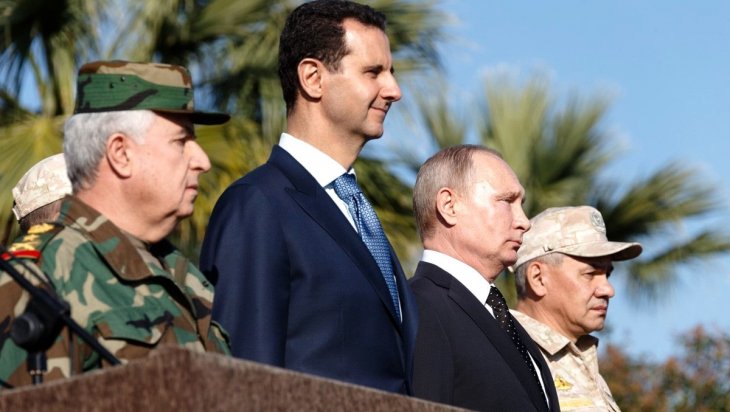 Almost four years ago, on January 1, 2018, the head of the Syrian regime, Bashar al-Assad, issued Decree No. 1 of 2018, which stipulates a government amendment that includes the Ministers of Defense, Industry and Information, and as a result of this decree, General Ali Abdullah Ayoub, who was serving as Chief of Staff, was appointed as Minister of Defense, succeeding General Fahd Jassim al-Freij, while the position of Chief of the General Staff has remained vacant since then, despite the exceptional circumstances that the country has been going through since 2011.

Although the hierarchy\structure of the Chief of the General Staff comes at the third level after the Commander-in-Chief of the Army and the Armed Forces and the Minister of Defense, this position is considered one of the most important military positions, even more important than the position of the Minister of Defense, especially with regard to commanding forces and military operations and coordinating them among all types of military forces and units, whether land, sea or air. The Chief of General Staff is also one of the permanent members of the Military Defense Council, and he chairs the meetings of the Officers’ Committee in the absence of the Commander in Chief, not to mention a large number of other tasks entrusted to him.

The position of the Chief of the General Staff of the Army and Armed Forces is usually occupied by an officer with the rank of "Lieutenant general", who is named by decree by the President of the Republic / Commander-in-Chief of the Army and Armed Forces. The officer nominated to take over the Ministry of Defense later, knew that all defense ministers since 1967 served as chiefs of the General Staff before assuming the ministry position.

General Ali Ayoub had held the position of Chief of Staff since July 2012, before he was named Minister of Defense at the beginning of 2018, and since then the position of Chief of Staff has been vacant, in a remarkable situation that the Syrian army has not witnessed since its founding in 1946. This raised several questions about how to conduct military operations throughout the war without the presence of a chief of staff to manage these operations, and sources indicate that the Russians take over the tasks of the chief of staff related to military operations in addition to the Iranians, through the Russian operations room located in Damascus (headquarters the General Staff), while the Minister of Defense assumes the tasks of the Chief of Staff of an administrative nature, and to the extent that the vacancy of this sensitive position within the existing circumstance indicates a major defect in the chain of command and orders. However, at the same time, it demonstrates the impact of the military intervention of the regime’s allies in that chain and the depth of this intervention, in a way that contributed to breaking the centralization and bureaucracy of the military regime’s decision in favor of its allies in the most sensitive and vital positions for managing military operations in Syria, as the General Staff is the central unit of the “army and armed forces.” “It supervises and commands all the fighting corps, divisions, and units, as well as a large number of departments and divisions.

It has always been said that military and security positions fall under the Russian and Iranian spheres of influence, and that these positions are distributed according to the influence of the regime’s allies. The strength of Russian influence comes first as a result of the different nature of Iranian interference from Russia in Syria. While Iran has invested in militias outside the army, Russia firstly restructured the army, and secondly got rid of the militias outside the military institution, by merging or dissolving them in favor of imposing a strong central military institution, in which the power is within the Russians. Defense and Chief of Staff, as General Fahd Jassim al-Freij was referred to retirement on the background of corruption-related cases as a result of his exploitation of a loophole in the Conscription law, which was addressed at a Russian request, to later become, as usual, the appointment of the Chief of Staff to the position of Minister of Defense and the appointment of one of the Deputy Chiefs of Staff to the position of Its chief, as was the case before, with the position of the chief of staff remaining vacant as we mentioned, because the leadership of the Russian forces operating in Syria has filled this void and confiscated the position for itself, without cooperation with the Iranians.

It is noteworthy that at the beginning of 2020, during his visit to Damascus, Russian President Putin received Bashar al-Assad "contrary to any international protocols" at the headquarters of the Russian forces. The way in which Bashar al-Assad and Defense Minister Ali Abdullah Ayoub were dealt with by Russia caused ridicule on social media, especially the way Defense Minister Ali Abdullah Ayoub was seated inside the headquarters.

It seems that the position of the Chief of the General Staff has become the same as a large number of regime forces' brigades and regiments "ink on paper", and it has been removed from the "actual" presence, so that the tabs of the Chief of Staff and his deputies appearing on the website of the Syrian Ministry of Defense have been removed, and all the rumors that were circulated about the existence of a Russian-Iranian conflict over appointing a figure close to one of the two parties to the position of Chief of the General Staff are unrealistic, as the position is too big to be a place for competition between Iran and Russia, in addition to that Iran is too small to compete for it, and it was satisfied with cooperating with the Russians in managing the military operations through the Operations Room in Damascus.

Despite the growing Iranian and Russian influence on the military establishment; However, Bashar al-Assad, as "President of the Republic and Commander-in-Chief of the Army and Armed Forces", still formally controls the chain of command and orders, but this official control does not mean complete control over the appointments of the chain of command and the flow of orders within it, and may be subject to balances with allies as needed.

Therefore, the presence of a chief of staff is confined to the Russian desire to appoint a new chief of staff, knowing that his appointment must be issued by a decree from the President of the Republic based on the proposal of the Commander in Chief, but if it was decided to remove the position completely, it is supposed to accompany this removal a complete amendment to the structure of the army and armed forces, giving a greater role to the commanders of the military corps and divisions, in addition to amending the text of the Military Service Law, or even issuing a new law, especially since this law has undergone more than 20 amendments since its issuance in 2003.