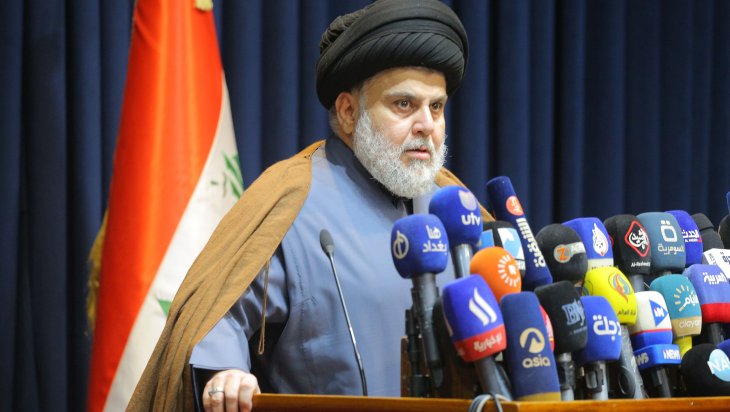 Despite two months passing since the election in Iraq, no significant progress has been made towards forming government. The Sadrist Bloc, led by firebrand Shia leader Moqtada Al Sadr, claimed victory by securing 73 seats, while the pro-Iran Fatah Alliance obtained only 17 seats of 329-seat-parliament.

Sadr wants to establish a "national majority government" - a bloc must have over half of seats in parliament - calling on Iran-backed militias to disarm if they want to join.

Pro-Iranians support a "consensus government" in which most parties will be included and government members would be responsible to their leaders first, then to the prime minister. Fears about the exclusion of pro-Iranians from the new government is deepening uncertainty.

In the new order established in Iraq after 2003, Shias – almost 60 percent of the population – are the primary decision makers in politics.

Along with the ethnic and sectarian quota system, the presidency was allocated to the Kurds, the prime ministry to the Shia and the position of parliament speaker to the Sunnis.

The allocation of the executive position to Shia leaders opens up space for Iran in Iraqi politics. While governments are headed by Shias, the laws give the task of forming the government primarily to the largest bloc.

Sadr is committed to forming a "national majority government" that is also compatible with his "nationalist agenda," which goes against both Iranian domination and the US presence.

The Taqaddum Coalition and Azm Alliance have already agreed to form a Sunni bloc that is expected to support Sadr. Along with Sunnis, support of the Kurdish party KDP, which secured 31 seats, gives Sadr enough of a majority to form the government.

The potential support of another Kurdish party, the PUK, which has 17 seats, would further strengthen Sadr's hand. Some smaller Shia groups and the Iraqi Turkmen Front are also likely to join Sadr's majority government. In that scenario, pro-Iranian groups could be completely excluded from government.

Consensus?
National consensus governments, since 2005, have corrupted the domestic political system and allowed for outsized Iranian influence in Iraq. The government that Sadr established with pro-Iranians in 2018 was overthrown after mass protests against corruption and Iranian influence.

Pro-Iranian militias were condemned for their brutality resulting in the deaths of 600 protesters. Because of growing Iranian influence and domestic opposition to consensus governments, Sadr has no intention of establish such a government even if it means he sits in the opposition.

Sadr’s scepticism towards the Iran-backed Fatah Alliance is no secret. Aware of the discord, Fatah sued to have the election annulled and pressured the Independent High Electoral Commission through militias they control.

Pro-Iranians in power
If Sadr’s national majority government plan fails, Sadr may abandon negotiations and claim leadership of the opposition. Considering the frequent negotiations that Sadr has been involved in - and the promotion of him as the 'saviour' of the country - this option might be difficult. Given his unexpected u-turns, such as boycotting elections and then taking part, Sadr might opt to sit in opposition.

In a scenario where Sadr is in opposition, pro-Iranians will rise to power, with Kurds and Sunnis most likely joining the government. Sunnis and Kurds will not adopt a definitive stance as they will watch the competition between the Shias.

While the new Sunni leaders are very pragmatic and have close ties to Iran, the Kurds are generally focused on being government stakeholders.

However, Sadr's position in the opposition will lead to frequent protests against the government, considering his power to mobilise large numbers. Such a scenario may create a military confrontation with pro-Iranian militias and harm the fragile security in Iraq. This could translate into a more influential Iran, while space for Turkey and the Gulf narrows even further.

The superiority of Sadr
Last week, Iraq’s Federal Supreme Court ratified the election results that were rejected and sued earlier by the pro-Iran Fatah Alliance. Parliament, which will open on January 9 for its first session after the election, is given 90 days to form a new government. Within this period, negotiations on the government formation will intensify further.

Sadr is well aware of his mathematical superiority. Therefore, he wants to establish a government within the framework he desires. A majority government with Sunnis and Kurds is the most likely option, but the exclusion of pro-Iranians may increase the potential for violence.

Iran won't stand by and watch its power wane after the boost it received from the US withdrawal.

Due to the possibility of losing its gains in Iraq, Iran may be obliged to encourage its proxies to join Sadr's government even with weakened representation.

It can be expected that Iran may become more flexible due to its economic crisis and the ongoing negotiations regarding the nuclear deal. In this context, without compromising his role as a 'saviour', Sadr could try to form government by giving pro-Iranian groups limited space that he can still control.

This article was published in TRT World website under the title of “Sadr will need to play chess to form Iraq's government” on January 01, 2022.