Search for a New Balance of Power in the Northern Syria 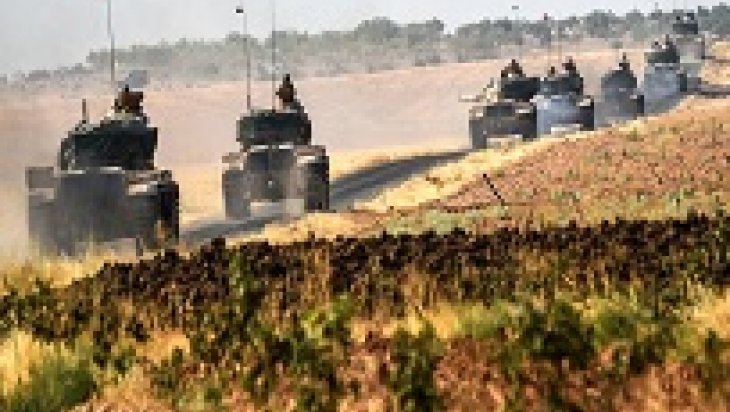 Turkey has launched a military operation in Syria, the aim of which is to create a zone free from terror groups on Syrian-Turkish border. However, Turkey also wants to prevent YPG from advancing, and warns YPG not to advance the west of Euphrates. Joe Biden, the Vice President of the US, gave his support to Turkey’s demand regarding YPG, during his visit to Ankara. Oytun Orhan, Middle East expert at the Center for Middle Eastern Strategic Studies (ORSAM), who says YPG cannot advance without the US support, answers the questions of Deutsche Welle Turkish, regarding the Operation Euphrates Shield.

DW Turkish: Is this operation necessary for Turkey? What does US support to the Operation Euphrates Shield mean?

Oytun Orhan: In fact, Turkey and USA had come to terms on launching such an operation within the process of use of Incirlik Air Base by the coalition jets. But Turkey couldn’t go through with it after the crisis with Russia which caused Turkey to lose its chance to intervene north of Syria. As the Turkey-Russia relations were reset, Turkey had a chance to intervene Syria anew and the conditions were reshaped. Turkey found it more necessary to intervene north of Syria after YPG took over Manbij, and started advancing on Al-Bab and possibly Jarablus. Turkey considers that the YPG controls a whole region in north of Syria as an existential threat, since Turkey considers YPG as the Syrian affiliate of PKK. Apart from that, ISIS is causing huge security problems for Turkey. The fact that these two actors are controlling the border enables them to infiltrate Turkey more easily. So Turkey doesn’t want to share borders with these groups. The refugees are another issue. More people may seek refuge. Turkey has plans to place these new refugees to a safe zone under the control of Syrian opposition groups. The return of some refugees in Turkey to the areas cleared of ISIS is also in question.

DW Turkish: Do you think it is possible to place the refugees in these areas and to achieve their return from Turkey?

Orhan: I don’t think it is possible at the moment. We are talking about a very narrow line which has a length of 98 km, from Azaz to Jarablus, and width of 10 km. But in my opinion, Turkey and the Syrian opposition groups may expand the area more. If stability and safety is provided in this area, it is possible for some refugees to return from Turkey. Even after Jarablus was cleared of ISIS, some habitants of Jarablus living in Turkey came to the border in order to go back home. But the number of people wanting to go back wouldn’t be a lot.

DW Turkish: The most important point of this operation is the possibility of a conflict between Turkey and Syrian Kurds. Vice President of the US, Joe Biden, expressed Turkey’s concerns, and warned YPG not to pass across the west of the Euphrates; otherwise the US would cut off its support to them. But according to their statements, the Syrian Kurds are insisting on this issue. What would be the consequences if this operation reached out to Syrian Kurds?

Orhan: We can infer from Biden’s statement that the US will no longer provide air support to YPG in the west of Euphrates. So if YPG decides to advance or does not withdraw from Manbij, the US will not support them in this area. And it doesn’t seem possible for YPG to achieve success against ISIS without the US support. Capturing Al-Bab would be impossible. ISIS was weaker in Manbij compared to Al-Bab, but it still took three months to take the control of Manbij, even with the US support. So I believe YPG is no longer going to be able to advance. Biden’s statement yesterday also suggests that US agrees with Turkey, regarding YPG to return to the east of Euphrates. This means that US will stay quiet on any step taken by Turkey, including use of force against YPG to make them return to east of Euphrates. So it is possible that Turkey and YPG might have a conflict.

DW Turkish: Will this operation be able to give Turkey what it wants and reach the solution that Turkey hopes or will it create another dead-end conflict in the Middle East?

Orhan: We can only say that this operation will crucially reshape the balance of power in north of Syria. Apart from that, this operation doesn’t play a critical role on either solving the crisis in Syria or addressing the issue of instability in the Middle East. But in the north there seems to be a tripartate structure. In the west of Northern Syria, specifically in Lazkiye and İdlib, seems to be under under the control of Russia and the regime; Turkey and the opposition groups supported by Turkey will be strong in the area between Azaz and Jarablus; and YPG will be active in the east of the Euphrates. This could be considered as a success for Turkey, at the moment. Turkey’s fight for preventing foreign terrorist fighters from crossing, will be stronger. ISIS will lose more power and will be squeezed to east of Syria.

DW Turkish: One of the most important actors in the Syria crisis is Russia. How would you describe Russia’s position regarding this operation?

Orhan: Turkey seems to have determined its conditions at both regional and global levels, before launching this operation. Almost none of the countries had a serious opposition against this operation. The US is already providing air support. Russia made a little comment expressing concern but Russia was probably aware of the operation in advance and gave Turkey green light.

DW Turkish: Syrian government criticized the operation in its statement. How should we read this statement?

Orhan: Regime’s reaction against Turkey’s operation was diplomatically necessary. But this reaction wasn’t all that serious. After all, this operation is against a common enemy, which is ISIS. So it is pointless for Syria to react seriously anymore, when Russia and Iran, the most important supporters of the regime, are already in agreement with this operation. Both militarily and politically, I don’t think the regime is going to be all that bothered by this operation. YPG has already been causing enough trouble for the regime.

DW Turkish: Does this operation have any significance regarding Bashar al-Assad’s future?

Orhan: This question can be answered by the statements of Binali Yıldırım, the Prime Minister of Turkish government. Recently he stated that “Whether we donnot like, Assad is one of the actors.” Assad might not be a part of Syria’s future personally, but the political structure and the social groups he is representing will most likely continue to exist in Syria’s future. They may even have the control in certain parts of country.

DW Turkish: It is said that Hakan Fidan, Head of the National Intelligence Organization, visited Syria. If this is true, is there any chance that he might have spoken with Bashar al-Assad and if so, about what?

Orhan: There are such claims, but I don’t think it is likely that such an important name could have a meeting with Assad. There can be limited communication between Turkey and Assad regime, indirectly. Not official, but some groupsi political parties in Turkey visits Damascus and had meetings from time to time. These committees probably conveyed messages to Turkey. But considering Turkey’s Syrian policy over the last 5-6 years, it is difficult for Turkey and Syria to be on the same page; however Turkey may continue to have indirect relations with Syria through Russia and Iran.