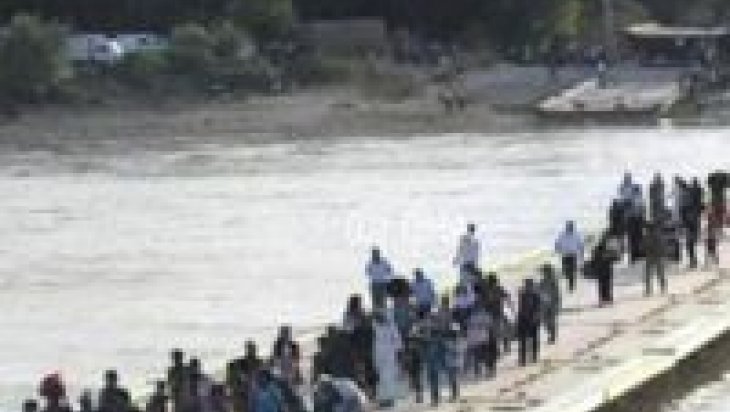 The number of Syrian refugees migrating to Iraq has exceeded 200,000. The vast majority of this migration wave is taking place in Iraq's predominantly Kurdish region of Kurdistan in northern Iraq.

Nearly all the refugees are Kurdish Syrians, who prefer Iraqi Kurdistan for reasons such as language, the Iraq's Kurdistan Regional Government's (KRG) flexible policy towards them, the geographic proximity, job opportunities and stability.

The majority of Syrian refugees have settled in the Domiz Refugee Camp near Dohuk province. Syrian refugees were recently settled in camps near Arbil and Sulaimaniya since the number of refugees has been testing the capacity of the city. The KRG manages the refugee camps mainly through its own means, but with some contributions from the United Nations and various nongovernmental organizations. Since the Iraqi central government isn't giving shelter to those who cross the border as refugees, it does not provide them with aid; this situation creates a rising financial burden on the KRG.

Furthermore, the increasing number of refugees has started to have a negative impact on the living standards of local residents with falling wages and rising rents. Above all, the majority of Syrian refugees will continue to live in Iraqi Kurdistan for the long term because it is proving impossible to restore stability in Syria.

Hence, the demographic structure in Iraqi Kurdistan is changing. This situation will have direct influences both on Iraqi politics in general and on the KRG in particular. Given that all resources are distributed in proportion to the population and the election results depend on an ethnic and sectarian basis, there will be an obvious influence on Iraq's general politics. Regarding KRG politics, the political tendencies of the migration wave will create a new electorate that is not in parallel with the dominant powers of the region. This means the political balance in Iraqi Kurdistan will change.

The wave of Syrian migration is also leading to a major demographic change in Kurdish districts in Syria. Given that 2 million Kurds live in Syria, almost 10 percent of the total population has evacuated their settlements.

Syrian Kurds are also migrating to Turkey as well as to Iraq. Hence, approximately 20 percent of the Kurdish population in Syria has had to leave their homes. In particular, a substantial part of the Kurdish population living in the north and northeast of Al-Hasakah province, known as Jazira, has emigrated. Despite the fact that there hasn't been much of a migration flow from cities and towns yet, the rural settlements are empty to a large extent. The Kurdish migration flow from Syria towards Iraq is taking place in particular from Derik, Ras al-Ayn (Serikani) and the rural areas of Qamishli and Afrin. The main reason for migration is the instability caused by the al-Nusra Front and the Popular Protection Units (YPG) forces affiliated with the military wing of the Democratic Union Party (PYD). In addition, there are economic difficulties, lack of job opportunities, as well as water shortages and electricity problems.

Following the first wave of migrations, Iraq's KRG closed the border crossings. Then on Aug. 15, the border crossings were reopened and some 40,000 Syrian refugees crossed to Iraq. According to the UN, the total number of Syrian refugees in Iraq is expected to exceed 300,000 by the end of this year. Given that the vast majority of them will be Kurdish Syrians, a major demographic change is going to take place in the Kurdish areas of Syria. Also, it is feared that the refugee camps created in Iraqi Kurdistan might have a negative impact on relations between the Turkish government and the KRG in the long term, as in the example of the Makhmour camp. Harsh living conditions in the camps pave the way for abuse.