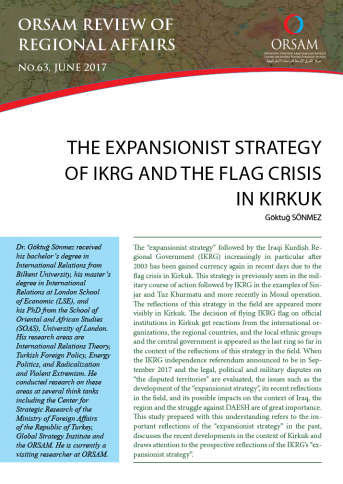 The Expansionist Strategy of IKRG and The Flag Crisis in Kirkuk

The “expansionist strategy” followed by the Iraqi Kurdish Regional Government (IKRG) increasingly in particular after 2003 has been gained currency again in recent days due to the flag crisis in Kirkuk. This strategy is previously seen in the military course of action followed by IKRG in the examples of Sinjar and Tuz Khurmatu and more recently in Mosul operation. The reflections of this strategy in the field are appeared more visibly in Kirkuk. The decision of flying IKRG flag on official institutions in Kirkuk get reactions from the international organizations, the regional countries, and the local ethnic groups and the central government is appeared as the last ring so far in the context of the reflections of this strategy in the field. When the IKRG independence referendum announced to be in September 2017 and the legal, political and military disputes on “the disputed territories” are evaluated, the issues such as the development of the “expansionist strategy”, its recent reflections in the field, and its possible impacts on the context of Iraq, the region and the struggle against DAESH are of great importance. This study prepared with this understanding refers to the important reflections of the “expansionist strategy” in the past, discusses the recent developments in the context of Kirkuk and draws attention to the prospective reflections of the IKRG’s “expansionist strategy”.