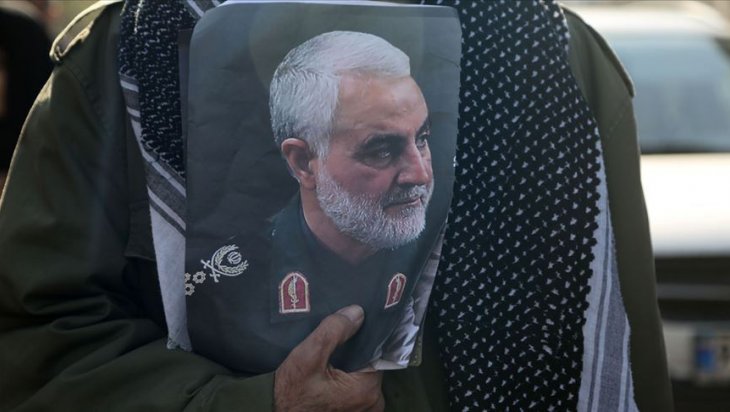 Emerging as a controversial actor after ISIS dominated most of the Iraqi territory in 2014, Hashd al-Shaabi and the militia groups that showed up again seem to be the determinant of the basic dynamics in Iraq. The current transformation of the recent tension between the US and Iran into a conflict in Iraq and the inclusion of militia groups in the given tension brought up the discussions on the situation of the Hashd al-Shaabi and Shia militia groups in Iraq and, accordingly, the future of Iraq to the agenda.

Indeed, both the extent of the protesters' reaction to the militia groups and the violent approach of the militia groups towards the protesters in the protests that started on 1 October 2019 in Iraq and still continue are leading Iraq into a dead end. However, the fact that the militia groups close to Iran target the US and the US presence in Iraq directly at the level of discourse and action and the US response to the militia groups in the same tone further aggravate the conflict. This conflict has become more apparent after the assassination of the Commander of the Quds Force Army affiliated to the Iranian Revolutionary Guards Corps, Qasem Soleimani, and the Deputy Chief of the Hashd al-Shaabi, Abu Mahdi al-Muhandis.

This situation has put serious pressure on the Iraqi central government. In Turkey, Hashd al-Shaabi is known as a structure directly affiliated to Iran. However, Hashd al-Shaabi achieved legal status with a law enacted in November 2016 and had legal rights equivalent to the police or army. In this sense, even though Hashd al-Shaabi has emerged as an umbrella organization of militia groups, it is now an official security force of the Iraqi state. Yet, the militia groups that compose Hashd al-Shaabi differ according to their political stances, identities and regional positions. To put it more clearly, as well as the groups close to Iran, there are others that have an Iraqi national identity and are directly supported by the Shia religious authority in Iraq. However, the number of militia structures formed by the Shia and Sunni tribes is also a factor that should not be ignored. It should also be emphasized that there are militia groups engaged in “gang” activities using the name of Hashd al-Shaabi. In actuality, all kinds of illegal actions and activities are carried out in Iraq through these groups. It is a common belief in Iraq that most of these groups are used by Iran for acts such as smuggling, illegal trade and assassination.

As of today, there are more than 70 Shiite militia groups known to be currently operating in Iraq and it is not easy to estimate the number of members of these groups. It is alleged that there exist as many external militias who are not members of Hashd al-Shaabi, or perhaps even more, as are the current number of those who are within the body of Hashd al-Shaabi. In the summer of 2019, allegations were brought that the US has given the Iraqi central government a list of militia groups for the latter to shut down and the Iraqi central government has denied these allegations. However, while the US included the Revolutionary Guards Corps, which conducts field operations in the Middle East, on the list of terrorist organizations as part of the economic and political sanctions it imposed on Iran, it carries out the Iraqi branch of this process through figures and institutions known for their proximity to Iran within the country. In this context, in February 2019, the Nuceba Movement and its leader Akrem al-Kaibi who is active within Hashd al-Shaabi were included in the list of terrorism. Besides, in August of the same year, it was decided to sanction South Wealth Resources Company and its two executives for allegedly supplying weapons to the Iranian Revolutionary Guards Corps’ structure in Iraq. In addition, the US Department of the Treasury on December 6, 2019 added Qais al-Khazali, the leader of Asa'ib Ahl al-Haq, one of the components of Hashd al-Shaabi, and his brother Laith Khazali as well as Husayn Falih 'Aziz al-Lami, who is believed to be carrying out the operations of the Iranian Revolutionary Guard, and Iraqi businessman Khamis al-Khancar to the sanctions list.

On the other hand, Asa'ib Ahl al-Haq, who was already on the sanction list on January 4, after the murder in the attack at the airport in Iraq's capital, Baghdad, on 3 January of Qasem Soleimani and Abu Mahdi al-Muhandis, the Deputy Chief of Hashd al-Shaabi in Iraq, was included in the "Foreign Terrorist Organizations" list. The leader of the organization, Qais al-Khazali, and his brother Laith Khazali were also included in the "Specially Designated Global Terrorists" (SDGT) list. Furthermore, the social media platform Twitter deleted the account of Qais al-Khazali, who took part in the protests in front of the US Embassy in Baghdad on December 31, 2019.

Militia groups weaken state authority
It is known that during Adil Abdul-Mahdi's term as prime minister, the US put serious pressure on Iraq to increase control over the Hashd al-Shaabi. In reality, a change was made in the structure of Hashd al-Shaabi in the last months of 2019 and the post of the vice presidency was eliminated. The main goal behind this decision may be claimed to be to remove Abu Mahdi al-Muhandis, who was known as the contact point between the militia structures in Iraq and Iran and who was killed in Baghdad with Iranian Revolutionary Guards Commander of the Quds Force, Qasem Soleimani, on January 3. In reality, this change within the Hashd al-Shaabi received a great resistance and Abu Mahdi al-Muhandis did not leave his post. However, he was eliminated by the US strike.

However, the fact that the Hashd al-Shaabi is a legal force brings a legal limitation for both Iraq and the US. In fact, the assassination by the US against Abu Mahdi al-Muhandis together with Qasem Soleimani means the killing of a commander of Iraq and is a violation of Iraq's sovereignty as Hashd al-Shaabi is an official security force. However, the Iraqi central government has no power to react officially and strongly against it. In this sense, the Iraqi government is insufficient to exert a claim of whole control over the state. Therefore, an administrative, political and military power vacuum has emerged in the country. In fact, Hashd al-Shaabi has not been adopted and fully controlled by the state. Currently, the militia groups have intense effectiveness in Hashd al-Shaabi. One of the most important reasons for this effectiveness is that the political organizations founded by militia structures have become the most influential figures of politics. In the elections held in May 2018, the al-Fateh List, in which political organizations of 15 militia groups came together under the leadership of the Badr Organization, took the second place with 48 deputies after the Sairoon Coalition of Muqtada Sadr. Muqtada Sadr, on the other hand, came first in the elections with 54 deputies. Considering the presence of a strong group such as Saraya al-Salam, which Sadr led, it is possible to argue that the militia structures have quite an impact on Iraqi politics. This situation causes a big problem for the state institutionalization in Iraq. The fact that the institutional structure in the state cannot be ensured leads to the increasing effect of militia structures on the state and the state itself militarizes. Thus, militia structures become stronger by using state devices and the institutional legitimacy of the state is weakened.

Iran tries to eliminate US influence in Iraq
This situation is more evident in the structure of Hashd al-Shaabi. The killing of Qasem Soleimani and Abu Mahdi al-Muhandis has consolidated pro-Iranian militia groups. Leaders of militia groups such as Nujaba Movement, Kata’ib Imam Ali, and Kata’ib Sayyid al-Shuhada, which are known as militia groups close to Iran under the leadership of Muqtada Sadr, held a series of meetings in Qom, Iran. The fact that Muqtada Sadr posed for the cameras with Nujaba Movement leader Akram al-Kaibi who is also known to have problematic relations with the US and whose name has been added to the list of terrorist organizations was an important message against the US. On the other hand, news reports that Abu Ali al-Basri, who is known as one of the leading names of the Badr Organization that is one of the closest groups to Iran and serves as the Commander of Hashd al-Shaabi responsible for operations, has been appointed by the Hashd al-Shaabi Delegation to replace Abu Mahdi al-Muhandis are quite remarkable.

It is even said that Iran has offered to fulfill the task of gathering Shiite militia groups to the Lebanese Hezbollah leader Nasrallah to replace Qasem Soleimani. Thus, it is possible to comment that Iran will try to break the influence of the US over Hashd al-Shaabi and Iraqi politics through the militia structures. However, it is a chance for the Iraqi state's institutional control that those who have replaced or will replace Qasem Soleimani and Abu Mahdi al-Muhandis may not be able to achieve the same effect. Here, protests in Iraq need to be taken into account. It is an advantage for the US that there is a serious reaction against militia structures in the demonstrations in Iraq. One of the most important steps to be taken at this point is the re-establishment of the state apparatus with the new prime minister to be elected quickly. While the emergence of a strong state structure prevents the mess in Hashd al-Shaabi, it can also limit the influence of Iran. This is a situation that will benefit both Iraq and the region.

This article was published on the website of Anadolu Agency on 22 January 2020 under the title of “The Future of Hashd al-Shaabi after the Assassination of Soleimani”.