The Implications of the Russia-Ukraine War on the Maghreb Region 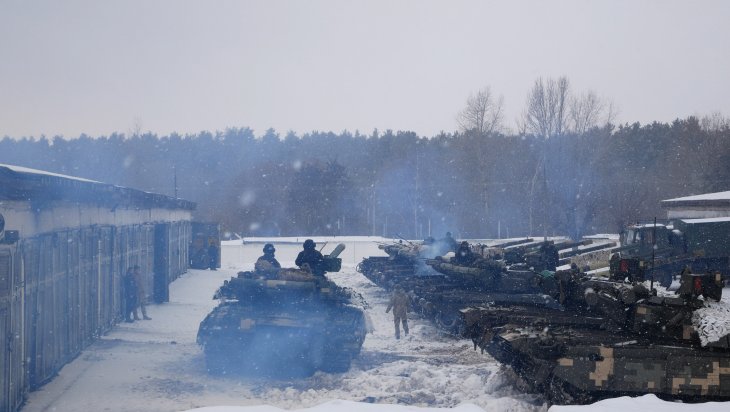 The relations between the former Soviet Union and each Maghreb country were not at the same level and have not followed the same pattern due to the political and ideological orientations that these countries adopted after their independence. Algeria and Libya, after Kadhafi's coup, chose the socialist approach as the model for governing the state, while Tunisia and Morocco adopted a model close to the liberal approach.

Among the Maghreb countries, Algeria stands out as the country with the closest relationship to  Moscow. This close relationship, in fact, dates back to the days of pre-independence  Algeria, when  the Soviet Union supported the Algerian revolution politically and militarily, and was the first country in the world to establish diplomatic relations with independent Algeria. The relationship between the two has further developed over the years thanks to Russia's support for  Algeria in its effort to build a national industry, especially in the seventies, and the continuing strategic partnership between the two countries in the military sphere.

The level of reciprocal official visits and the number and type of agreements signed are usually seen as indicators that  show the strength of the relationship between the countries. In this regard, it is observed that the official visits at the level of the heads of state took place only between Russia and Algeria, Morocco, and Libya. No Russian president has ever visited Tunisia or Mauritania, where the exchange of official visits has been limited to the foreign minister and lower levels. Among Maghreb countries, Algeria has always been in  the first place in terms of the number of bilateral agreements signed with Russia. 120 agreements signed between the two countries in various fields, including a strategic partnership agreement, are a clear indicator in terms of quantity and quality. Morocco ranks second with its bilateral agreements with Russia.

On the other hand, all Maghreb countries  recognized Ukraine's independence in the early 1990s. This new state, which emerged after the collapse of the Soviet Union, remained under the influence of Russia until 2014, when it turned its face to the West. This transformation has not affected Ukraine-Maghreb relations. These relations are mainly based on sourcing most of the wheat imports from Ukraine when it comes to Morocco, Tunisia, and Mauritania, and technical cooperation when it comes to Algeria.

Russia's invasion of Ukraine on February 24, 2022, has caused a serious global crisis. It has caused security, political and economic disruptions in the international arena, especially in the global energy and food markets. Due to the complex and intertwined relations with the two sides of the conflict, especially at the security, energy and trade exchange levels, the Maghreb region is not immune to the effects of the war in Ukraine.

The Security implications of the war in  the Maghreb region
According to the yearly armament report of the Stockholm International Peace Research Institute, 79% of Algeria’s arms imports were made from Russia in 2019 and 2020. The rest of the imports were made from Germany, France, Italy, the UAE, and China. Algeria ranks  third among the countries that  import weapons from Russia, after India and China. According to World Bank Group statistics, Algeria's spending on  armaments exceeds 11 billion dollars annually, representing 6.7% of GDP. Thus, Algeria ranks fourth in the world in terms of the share of military expenditures in GDP.

The report also indicates that Morocco and Tunisia  fully relied on the import of weapons from the USA  in 2019 and 2020, while Mauritania mainly imported from China. The Stockholm Institute was unable to obtain data for Libya due to the complexity of the situation here.

It seems that Algeria will be the country  most affected by this war. As a matter of fact, for decades, Algeria hasn’t adopted policies that aim to diversify its weapons resources and strengthen/develop its local defense industry. For this reason, it is expected that the Russian arms supply to the country will be interrupted. On the other hand, considering the fragile situation in Tunisia, armed conflicts in Libya and the Sahel region, broken diplomatic relations and closed borders with Morocco, it is clear that Algeria will inevitably be affected by this war. When it comes to weapons procurement, finding an alternative supplier and swiftly deploying the new systems is not an easy task. As a matter of fact, it is not just about finding alternative sources of supply and inking purchase agreements. It is more about the time needed to adopt the old weapon systems to the new weapons and to train the personnel for the efficient use of the new weapons. Considering that Germany is the second source with 12% and China is the third with 9.9%, Algeria will be able to turn to these two countries in search of alternatives to Russian weapons.

The implications of the war on the energy sector in the Maghreb:
Russia supplies about 200 billion cubic meters of gas per year to the European Union. The highest annual quantity of Algerian gas provided to the European market has reached 51 billion cubic meters so far. For this reason, it is not technically possible for Algerian gas to replace Russian gas in the European market. Moreover, given the depth of Russia-Algeria relations and the historical attitude of loyalty of Algerian diplomacy towards its allies, it is unlikely that Algeria would act in such a way aiming to substitute Russia. The abstention vote by Algeria on  the United Nations General Assembly resolution condemning Russia's attack on Ukraine is an indicator of this approach.

It can be said that the same is true for Libya, but with different calculations and contexts. As a matter of fact, French and Italian influence in Libya has  declined in favor of other regional actors such as Russia, the UAE and Turkey. This makes it difficult for any supply from Libya to replace Russian gas. According to the Libyan Oil and Gas Minister, such a supply is technically impossible.

Although Algeria and Libya will not be able to benefit from the current situation by supplying gas to the European market to balance the interrupted Russian gas supply, they will surely benefit from the increase in energy prices. As a direct result of Russia's attack on Ukraine, the  price of Brent oil approached the $140 threshold in the second week of the war . However, it is difficult to predict that they will benefit from the historically hiking prices for the re-construction of their economies when taking into account the division and conflict in Libya and the political crisis after the popular movement in Algeria. Furthermore, it seems that the gains obtained from high energy prices will be lost to the rising prices of  food and industrial products in many energy producing countries.

Implications of the war on trade with the Maghreb
In terms of trade in goods and services, neither Russia nor Ukraine are major sources of imports and exports for  Maghreb countries . According to the  Observatory of Economic Complexity (OEC), the trade volume between Algeria and Russia in 2019 amounted to $1.66 billion. Excluding arms trade, Algeria's imports from Russia constitute only 4% of its total imports. The trade volume with Ukraine, on the other hand, remains lower than with Russia, at  approximately 400 million dollars. Algeria imports 386 million dollars annually from Ukraine, 70 percent of which is iron.

The trade volume between Morocco and Russia is roughly the same as Algeria's, leveling at $1.71 billion annually, and coal accounts for half of Morocco's $639 million in imports from Russia. The trade volume between Morocco and Ukraine reaches 381 million dollars annually, of which 310 million dollars are  imported from Ukraine. Wheat constitutes more than 50% of the total imports.

Since the trade volume between Libya/Mauritania and Russia/Ukraine is very low, the impact of the war will be insignificant for  these Maghreb countries. The impact of the war on Algeria will be slight in terms of bilateral trade in general, but a  significant impact should be expected on Tunisia and Morocco in terms of wheat imports in particular. At this point, the wheat issue deserves to be elaborated on in more detail. According to the OEC, Russian and Ukrainian wheat together constitute 35% of Algeria's total wheat imports. Algeria has diversified its wheat import sources in the last two years with the aim of reducing its  dependency on French wheat, which was once a monopoly in the Algerian market, and opening up access to the Canadian and American markets. It seems that Algeria will not be much affected  by the interruption of Russian and Ukrainian wheat supplies. The same is true for Morocco, where Russian and Ukrainian wheat account for 30% of total wheat imports. While France gets the biggest share of Morocco's total imports, up to 40%, the rest of the demand is met by  Canada. Obviously, it is France who will benefit most from the interruption in the import of wheat to Morocco from Russia and Ukraine. The same is valid for Mauritania, which supplies more than 33% of its wheat needs from Russia and Ukraine. Mauritania’s other source for wheat is France, which accounts for 48.5% of the Mauritanian wheat imports. Therefore, it is France that  will benefit from the results of the war in the Mauritanian market.

Among Maghreb countries, Tunisia is expected to be the most affected by  Russia's war against Ukraine. As a matter of fact, Tunisia meets 51% of its wheat needs from Russia and Ukraine. It gets  the rest of its needs from France, Spain, Bulgaria, and Greece. Therefore, once again, it is France who will benefit most from any interruption in Russian and Ukrainian wheat supplies  into Tunisia.

On the other hand, Libya is the only Maghreb country that will not be affected by the cuts in Russian and Ukrainian wheat. Because it sources all of its needs from Canada, the USA, Spain, and France, respectively at the rates of 52.7%, 29.8%, 12.3% and 5.18%.

Summary of expected effects
It is difficult to predict the outcome of the Russian war on Ukraine, especially since the military operations are still in  their early phase. However, based on the above data, if the war is prolonged and Russia enters into a long-term battle of attrition, the effects of the war on the Maghreb countries will vary according to the degree of political and economic ties with Moscow and Kyiv. This effect will emerge in the context of three main elements: arms trade, energy prices, and wheat. Although it would be easy for the Maghreb countries to find quick alternatives for their wheat supply deficit via France, Canada or the USA,  it will be more difficult and take longer to find alternatives for their arms need. This will create a challenge for Algeria. On the other hand, while both Algeria and Libya will benefit from the rise in energy prices, this increase will consume many of the resources of Tunisia, Morocco, and Mauritania, which are already suffering from economic problems.