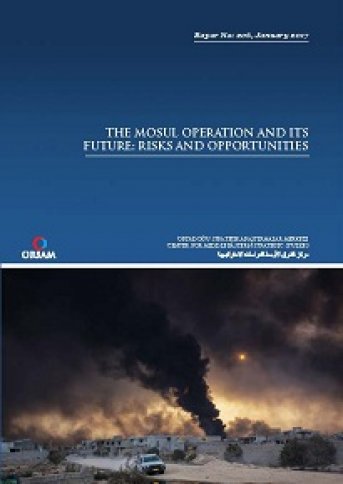 The Mosul Operation and Its Future: Risks and Opportunities

ISIL, which dominated the headlines in Iraq since 2014, has started to lose major territory between 2015 and 2016. The operation to liberate ISIL’s last major stronghold in Iraq, Mosul, started on 17 October 2016. Even with the start of the operation, there is still uncertainty about the future of Mosul. For example, there is no clear timetable about when and how the operation will be concluded. There is doubt about the success of the operation which was started before liberating the surroundings of Mosul and cutting logistical support lines of ISIL.

At the same time, there has been disputes between the forces involved in the offensive. The disputed included how Iraqi security forces and peshmerga would position themselves, how the PMU forces will take part in the operations, and what roles the Ninova Guards led by former Mosul Governor Etil Nuceyfi will play. Moreover, the status of Bashiqa Camp, which hosts Turkish military presence in it, has become one of the controversial issues regarding the Mosul offensive. With the US initiative, both Erbil and Baghdad decided for joint operations, and the offensive was eventually launched despite all those uncertainties.,

Despite the launch of the offensive, the forces involved, operation plans, the pace of progress and more importantly the political and administrative structure of the Mosul in the aftermath of the operation are some of the questions that remain unanswered. Questions remain as to how security will be maintained after the operation, how Mosul will be restructured, social, political, administrative and economic equilibrium will be reestablished, and how the people of Mosul who were displaced can return.

This report seeks to cast light on Mosul’s pre-ISIL political and administrative conditions, while at the same time summarizing the political-military conditions before the launch of the Mosul operation. Broadly addressing the basic dynamics of the operation, the report discusses the risks and opportunities that the operation presents for Mosul and Iraq.