The Never-Ending “Arab Spring” of Iraq 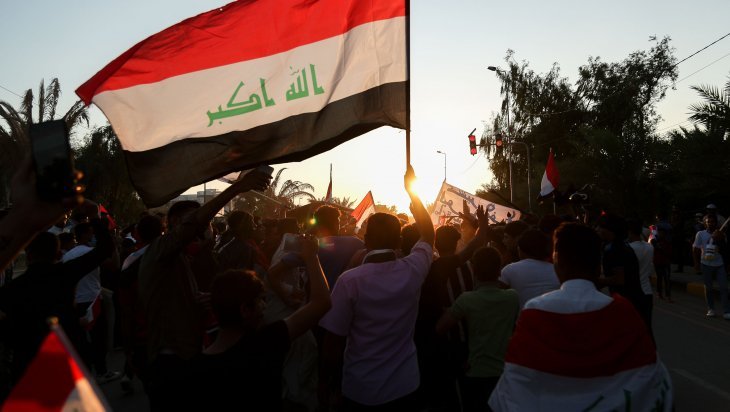 Following the first “Arab Spring” which started when street seller Mohammed Bouazizi set himself on fire on December 17, 2010 in Tunisia, a second wave of the revolts started sweeping across Sudan, Algeria, Lebanon and Iraq and continued throughout 2018 and 2019. The events which can be called the by-products of the continuous mayhem in the region, managed to displace the governments and are still strong in Iraq with scores of people pushing for a change. Security, administration, economy, health, social and infrastructure-related problems that arose following the US occupation of 2003, combined with the loss of control of almost one third of the lands to ISIS in 2014, threaten to transform the revolt culture into a permanent phenomenon and may worsen the current fragility even though it may inspire hopeful thoughts for future.

Days of Rage in Iraqi “Arab Spring”
The Iraq-Iran war between 1980-1998, the occupation of Kuwait, heavy sanctions, the US occupation in 2003 and the civil war between 2006 and 2008, followed by the government corruption, unemployment, insufficiency of state services in 2011, as well as security problems and discomfort with US presence in the country, sparked “Iraqi Revolution” protests. Marches in cities like Baghdad, Basra, Mosul, Kirkuk, Anbar and Dhi Qar, had proven to be a challenging test for the Nuri al-Maliki government, who came to power after a long round of negotiations as well as for the local administrations.

When the protests were violently suppressed on February 25, 2011, the so-called “Rage Day”, which was eight months prior to US withdrawal, and many protesters were killed, the protests turned into an explosion of anger and as a result, 23 protesters more were killed in Fallujah, the scene to some of the most violent clashes.

Despite many religious leaders’ calls for an end to protests (like Ayatollah Ali al-Sistani), many politicians fled the country fearing escalating tension which was seen by many as their attempt at self-preservation rather than solidarity with the protestors. Indeed, the then-Prime Minister Maliki admitted that the politicians that left the country should not have done that and instead should have stayed and tried to solve the problems of the people.

During this time Maliki reduced his own salary, started helping the poor and the elderly and promised a revision of government programs within the next 100 days. But when he claimed that Saddam Hussain supporters were behind some of those incidents and had arrests made in line with that claim, he dashed hopes for any reform expectations.

The Arab Spring which toppled governments in countries like Egypt, Yemen, Tunisia and Libya failed to make the Maliki government resign or to push for a change in the Constitution that was made under the supervision of the US. In addition, the failure of the promised reforms multiplied the anger on the streets.

From “Arab Spring” to “Sunni Spring”
When the Shia leader Maliki came to power in 2006 in Iraq where radical changes had taken place following the US invasion in 2003, the way he reduced the investments in Sunni-majority regions, and limited the political representation of Sunnis, combined with his indifference to increasing unemployment and poverty, arbitrary arrests and lack of efficiency against terror groups, deepened the trust issues within the Sunni community towards the government.

The 2012 raid of the home in Fallujah of Rafi al-Issawi, one of the leaders of Sunnis and the former Minister of Finance of Iraq, by the special units of Maliki was a milestone. Again, the removal of Sunni politician Saleh al-Mutlaq from his office, the former vice Prime Minister of Iraq, after he criticized Maliki of turning into Saddam, and the death sentence of Sunni leader Tariq al-Hashimi, the former vice President, further escalated the tensions. The built-up anger fueled violent anti-Maliki protests in Sunni-majority Mosul, Saladin, Kirkuk, Anbar and Diyala in late 2012.

The protests continued throughout the first half of 2013, with support from Shia leaders like Muqtada al-Sadr and reached its peak when Maliki forces raided Sunni camps in Havije and killed 42 people. When the Sunni clans declared jihad after this incident where more than 200 people died, Sunni people became even more alienated and it became easier for ISIS to find support among them.

“Democracy Beacon” and the Rise of ISIS
The sectarian approach of Maliki’s Prime Ministry deepened the fault lines in the society, especially when he tried to pull the strings of the security bureaucracy by taking control of the Ministries of Defense and the Internal Affairs and the power vacuum that was created in Iraq played into the hands of ISIS. This sectarian policy of Maliki even led to autonomy demands in Sunni-majority areas like Mosul, Anbar and Saladin. Indeed, when ISIS captured Mosul in June 2014, the Iraqi army fled, and ISIS managed to take control of at least one third of the country. Despite the rhetoric of becoming the “democracy beacon” in the region after the occupation, the divisive management in Iraq, the quotation system built by the US, the bad experiences after the occupation of 2003 and the new developments in Syria turned the country into a hotbed for ISIS.

One of the demands raised during the “Arab Spring” protests was the withdrawal of the US, but when the US indeed left the country in 2011, it became clear that it was impossible to get rid of ISIS without the support of the US. However, it also emphasized the bad legacy of the US and the divisive policy of Maliki government. For four years, US-led coalition forces fought against ISIS, which mostly destroyed Sunni cities, and won a victory. However, the Sunni community, which had already been disenfranchised after 2003, was oppressed even more with the rise of ISIS and the culture of revolts turned into a culture of fear. Also, the change in social and political inclinations in Sunni regions, consolidated the militia culture.

Tahrir Protests Mark a New Beginning
As the Sunni regions faced ISIS destruction in the summer of 2015, Shia-majority regions in the south and central parts of the country, including Baghdad, suffered from common power outages. Such problems with public services triggered new protests. Although these protests, which put the then Prime Minister Haider al-Abadi in a difficult position and flared up again at certain intervals, were considered basic demands of daily life, they were important in that they reflected the culture of revolt. Indeed, similar protests that avalanched into violent incidents in Basra in 2018, were among the most important reasons behind the resignation of Abadi. When Abadi failed to answer calls for reforms, Ayatollah Sistani withdrew his support for him.

Iraqi society became a scene of an Iran-US tug of war in the post-ISIS era and the people once again seized an opportunity to hold its administration to account in October 2019. The protests which were organized without a leader and on the social media, were mostly focused on unemployment, corruption, failing public services and demands for government resignation and were staged in Tahrir Square of Baghdad. Later they spread to the many other cities, especially southern states. Particularly, when the Shia people took to streets and challenged the Shia-controlled system, the world was shocked. Indeed, even though the first Arab Spring wave failed, the subsequent protests dislodged the Prime Minister Adil Abdul Mahdi.

The protests, which are marked by anger towards Iran’s influence over the country and the Tehran-backed militia, are a reminder of the first Arab Spring which emphasized honor and freedom with its sect-free rhetoric. The fact that security forces and militia killed more than six hundred protestors and countless activists were assassinated, is not forgotten by people and therefore triggers more and new protests. After lengthy discussions, Mustafa al-Kadhimi, who had no links to political parties and who had been the head of Iraq's National Intelligence Service, became the Prime Minister, changed the election laws and started early election process. This shows that some demands of the protesters are taken seriously, and the wishes of the street can no longer be ignored.

Can the People on the Streets be Silenced?
According to anti-corruption index published by Transparency International, Iraq ranks 168 among 180 countries. Youth unemployment is at 30%, and 22% of the 40 million people in the country have an income less than 60 US dollars and 3 million people are unable to meet their daily food needs. Despite this fact, public funds worth 450 billion US dollars have disappeared since 2004. In addition, even though the country has the fourth biggest oil reserves in the world, foreign people are dominant in the oil industry of Iraq instead of native Iraqis. In a similar manner, income inequality, excessive enrichment enjoyed by a small portion of the population, and failure of public services can be said to justify the reaction of the people.

We cannot say that the Arab spring which once toppled the dictators, succeeded in changing the quota-based system built after the occupation of 2003. Even though the protests where hundreds of people died managed to change the government, they did not help much in inspiring hope that the mayhem caused by Iran-US competition and Iranian influence will stop. However, as can be seen in the most recent wave, it is possible to say that the protesters will not stop rightly making demands and that the effects of the Arab spring will continue. It would be misleading to expect that the culture of revolt will just end with the statements of the politicians or their political pressure.