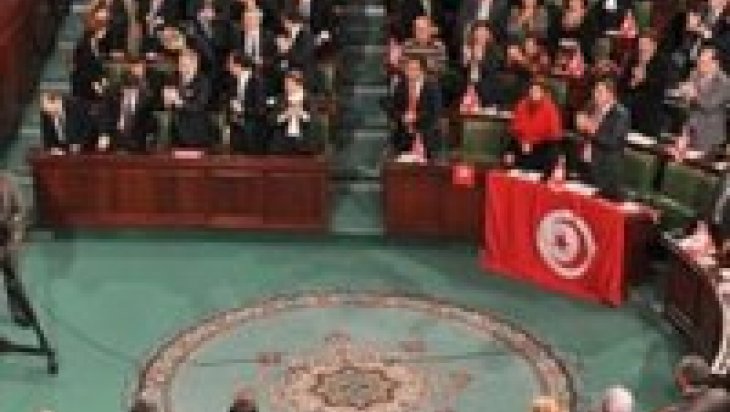 The government formation process in Tunisia, which had been carried out in quiet since October 2014, was ended with a vote of confidence by Tunisian parliament. The government formed by Prime Minister Habib Essid was approved by 166 out of 217 on 5 February 2014.

On 5 January 2015, the new president Beji Caid Sebsi named Habib Essid, from Nidaa Tounes, as prime minister to form new government; hence talks for government formation among the parties in the parliament gained momentum. Despite the fact that Essid was a nominee from Nidaa Tounes, the appointment of Essid was an outcome of consensus among the major parties in Tunisia. Therefore there were high expectations that a national unity government would be formed by Essid. However, government formation process was not as easy as reaching an agreement on the prime minister.

Nidaa Tounes, the winner of the election with 85 seats in the parliament, needed to gain the support of 109 deputies, the quorum, in order to form a government. Statements from Nidaa Tounes during January had indicated that Essid would probably form a coalition with secular parties, instead of Nahda. Under these expectations, Essid announced the first government line-up on 23 January 2015. The first proposed government included Nidaa Tounes and the Free Patriotic Union (referred to by its French acronym, UPL, which has 16 seats). However, the majority of the proposed government comprised of technocrats, including activists from civil society organizations, experts and non-parliamentary women and youth. Hence, Essid’s strategic calculations were based on the gaining support from other parties in the parliament to reach the quorum by using the rhetoric of “technocrat government”. However, strategy of Nidaa Tounes to exclude major parties from government instead of forming a unity government, created anger among Afek Tunis and the Popular Front, who had expected to take a place in the government. Therefore, Nahda, Afek Tounes and the Popular Front announced that they would not back the government. The strategy of Essid, based on persuasion of major parties through technocratic candidates, instead of sharing power failed due to harsh criticisms coming from parties as well as civil society organizations.

On 26 January, a new dimension was added to the government formation process. Interim Tunisian Prime Minister Mehdi Jomaa submitted the resignation of technocrat government, which was formed due to a road map that ended political turmoil in 2013 summer. In turn, Sebsi, accepted the resignation letter but, asked Jomaa to continue the management of current affairs, till the inauguration of the new government. Jomaa’s resignation revealed that Essid would run out of time to form the government. Due to the critics from major parties in the parliament and civil society organizations against the proposed government, Essid decided to postpone the vote of confidence in the assembly and to revise the government line-up at the day of Jomaa’s resignation, on 26 January. Thus, once again, a new round of negotiations for government formation and alliance building started.

The New Government with Nahda

Under these circumstances, Prime Minister Essid announced a revised formation of the new cabinet on 2 February 2015. Nidaa Tounes took important posts such as ministry of finance and foreign affairs; however this time coalition government also include Nahda and Afek Tounes in addition to the Free Patriotic Union. The new cabinet contains one minister from Nahda, Minister of Vocational Training and Employment (Zied Laadhari), as well as three secretaries of state; Secretary of State to the Finance Minister (Boutheina Ben Yaghlane), Secretary of State to the Development, Investment and International Co-operation Minister (Lamia Zribi) and Secretary of State to the Health Minister in charge of Hospitals' Upgrading (Nejmeddine Hamrouni). Afek Tounes took Minister of Development, Investment and International Co-operation (Yassine Ibrahim), Minister of Women, Family and Children (Samira Merai) and Minister of Communication Technologies and Digital Economy (Noomane Fehri).

The main ministries such as the Ministry of Justice and the Ministry of Defence have been given to the independent names. Mohamed Salah Ben Aissa, a law professor and a former secretary of state in interim government formed by Sebsi in 2011, is appointed as Minister of Justice. Essid handed Ministry of National Defence to Farhat Horchani, a law professor who ran an association for constitutional rights; and Ministry of Interior to Mohamed Najem Gharsalli. Gharsalli had worked in the body of the judiciary for nearly 25 years; had served as President of the Court of First Instance in Kasserine; then appointed governor of Mahdia, during the interim government of Sebsi in 2011.

Thus, despite the objections of party members, Nida Tounes has established a coalition government which also includes Nahda. Mondher Belhadj Ali, one of the party chairmen, argued that 70 of the 89 deputies in Nidaa Tounes are against forming a coalition with Nahda in a recent interview on 15 January 2015. However after coalition formation with Nahda, Mondher Belhadj Ali stated that the main issue is not Nahda-Nidaa confrontation; close relations may establish between two parties in the future; and the main enemies of Tunisia are poverty, illiteracy and underdevelopment. Despite the softening of the attitude of the party, eight deputies including two party chairmen, Abdülaziz Kotti ve Khemais Ksila, did not attend the vote of confidence. Those members, who did not participate voting, criticized their party’s decision. A similar situation had occurred when Nahda, CPR and Ettakatol formed troika government, and some members of CPR and Ettakatol resigned their parties. However these parties had managed the transition period and established two coalition governments. Therefore all three parties formed coalition with Nahda, Afek Tounes, Nidaa Tounes and the Free Patriotic Union may face similar challenges. Nevertheless Nidaa Tounes will need Nahda’s support to secure the future and stability of the newly-formed government, which probably plans to implement structural reform in security sector and economy. Nidaa Tounes’ dependence on Nahda is also an outcome of being a rooftop party that brings figures from very different political stance.

The new government will implement some economic reforms in order to re-attract foreign direct investment to the country. The prior statements coming from Nidaa Tounes indicates that the new government is going to give priority to economic policies. It is possible to predict that Slim Chaker, the new Finance Minister, who began his career in the Ministry of Planning in 1986 and had experience in banking sector, will likely adopt liberal economic policies. These policies would not be welcomed by the left-wing parties including the Popular Front, which demand a greater role for state in the economy. This contradiction on economy policies already impacted Nidaa Tounes’ decision to form a coalition with Nahda instead of the Popular Front. Similarly, it is highly possible that Essid considers the opposition of left-wing deputies within Nidaa Tounes. The political needs that compel Nidaa Tounes to ally with Nahda may be conducive to soften polarized political camps with political crises and culture wars in Tunisia.